Following a successful trial along the Pohang Canal, the South Korean company is set to launch its vessel across the world… 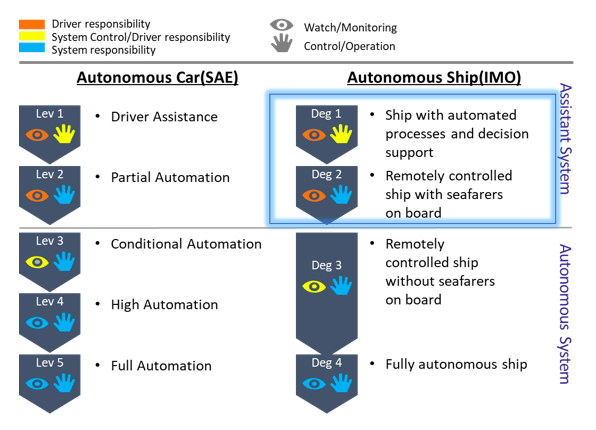 The rise in popularity of autonomous cars ashore – namely Tesla – will undoubtedly influence clients’ perspectives on the use of the technology for boats and yachts. Avikus is a new subsidiary of the Hyundai Heavy Industries (HHI) Group that specialises in autonomous navigation technology and as South Korea’s largest global shipbuilder, is interested in streamlining this key part of the logistical supply chain, but also installing its equipment on smaller, leisure craft.

Avikus developed a state-of-the-art autonomous navigation technology called HiNAS (Hyundai Intelligent Navigation Assistant System) that recognises objects surrounding the vessel and the planned route to alert seafarers on the risk of collision, based on augmented reality. It achieves this by using six specialist cameras and LiDAR (Light Detection And Ranging) – a remote sensing technology. In April of this year, Avikus installed HiNAS for the first time on a large merchant ship and anticipates equipping the technology on 70 further ships within the next 12 months. The team also has plans to orchestrate a transoceanic voyage early next year.

In June, Avikus completed a fully autonomous, unmanned operation of its prototype leisure vessel with 12 passengers on board. The team chose the ten-kilometre-long Pohang Canal – known as a difficult, crowded waterway to navigate – to showcase the operation of its vessel. As a result of this successful maiden voyage, it hopes to launch the world’s first self-sailing leisure boat in 2022. For Lim Do-hyeong, CEO of Avikus, this not only makes sailing much more efficient but also could alleviate the concerns of amateur sailors. “By applying autonomous navigating technology to leisure boats, users can greatly reduce the time required for berthing and docking, as well as the risk of accidents during operation,” he remarks.

Do-hyeong believes that this autonomous technology will open up the world of sailing to everyone. “The autonomous shipping solution for leisure boats has been developed so that anyone can easily enjoy ocean leisure. The new technology holds various functions including route planning towards destinations, autonomous obstacle detection, collision avoidance control, automated parking, and mobile monitoring – but it’s still at the prototype stage.”

Safety is always part of the conversation when discussing autonomous technology, as human error accounts for a significant amount of accidents and injuries – both ashore in cars and at sea on vessels. Do-hyeong believes that the higher percentage of boats that use this technology, the better. "Deep learning technology is applied to HiNAS, which greatly increases navigation safety because it automatically detects obstacles missed with the existing sensors and prevents collisions. If HiNAS is widely used, we can prevent hundreds of collisions and stranding accidents annually."

The International Maritime Organization's (IMO) has recently updated its regulatory framework to mirror the advances in autonomous vessels. Avikus has successfully created a vessel that operates under ‘Degree One’ [a ship with automated processes and decision support: Seafarers are on board to operate and control shipboard systems and functions. Some operations may be automated and at times be unsupervised but with seafarers on board ready to take control] and is set to unveil its ‘Degree Two’ autonomous model [a remotely controlled ship with seafarers on board: The ship is controlled and operated from another location. Seafarers are available to take control and to operate the shipboard systems and functions] at the upcoming International Consumer Electronics Show 2022 in Las Vegas, Nevada in January. As Do-hyeong summarizes: “The difference is in the Degree One, the responsibility of control goes to the sailor, while the Degree Two automatically conducts the control function through the system.”

The developments of Avikus’ technology represents a huge step forward for autonomous vessels in the yachting industry. Although the yachting market can be slow to adapt, the advancements of Avikus could attract an untapped pool of clients into the industry, for the benefit of all.

The evolving issue of bridge complexity

Integrating artificial intelligence on board