SuperyachtNews.com - Owner - The evolution of the Red Sea

The evolution of the Red Sea

With the removal of the High-Risk Area designation and continued infrastructure developments, what does the future hold for safe cruising in the region?

The Red Sea is evolving from a necessary transit route for yachts heading to the Indian Ocean and Asia from The Mediterranean, into a world-class yachting destination in its own right. Whilst the developments are relatively nascent in comparison to the ambition of Mohammed Bin Salman's vision for the region, work is already well underway in the Northwestern reaches of Saudi Arabia.

A significant feature (and potential stumbling block) for yachts considering Suez Canal transits and the Red Sea and Indian Ocean cruising has been the use of armed private security. Mandated by insurance premiums, this service formed as a reaction to the Somali Piracy threat that emerged in the mid-2000s.

The removal of this designation is a reaction to the significantly reduced frequency of piracy-related incidents in the region. To further boost security, there is a multi-national naval task force tasked with combating piracy in the Somali basin by conducting a five-day operation aimed at increasing naval presence and informing the maritime community on the continuing risks to shipping despite a lull in Somali piracy and the expiration of a key industry designation.

The removal of this definition will undoubtedly serve as a boost to the significant superyacht infrastructure developments currently planned for the Red Sea and Gulf regions. Safe, economical and logistically sound cruising is vital to increasing visitation of a new generation of yachts looking to explore the exciting developments in the region.

The Line is probably the most globally recognised aspect of the NEOM project. However, the recent launch of Sindalah Island will become the first physical showcase of NEOM and is being marketed as an exclusive gateway to the Red Sea which will welcome the global yachting community. Sindalah's 86-berth marina and 75 offshore buoys aim to become a key destination itself. 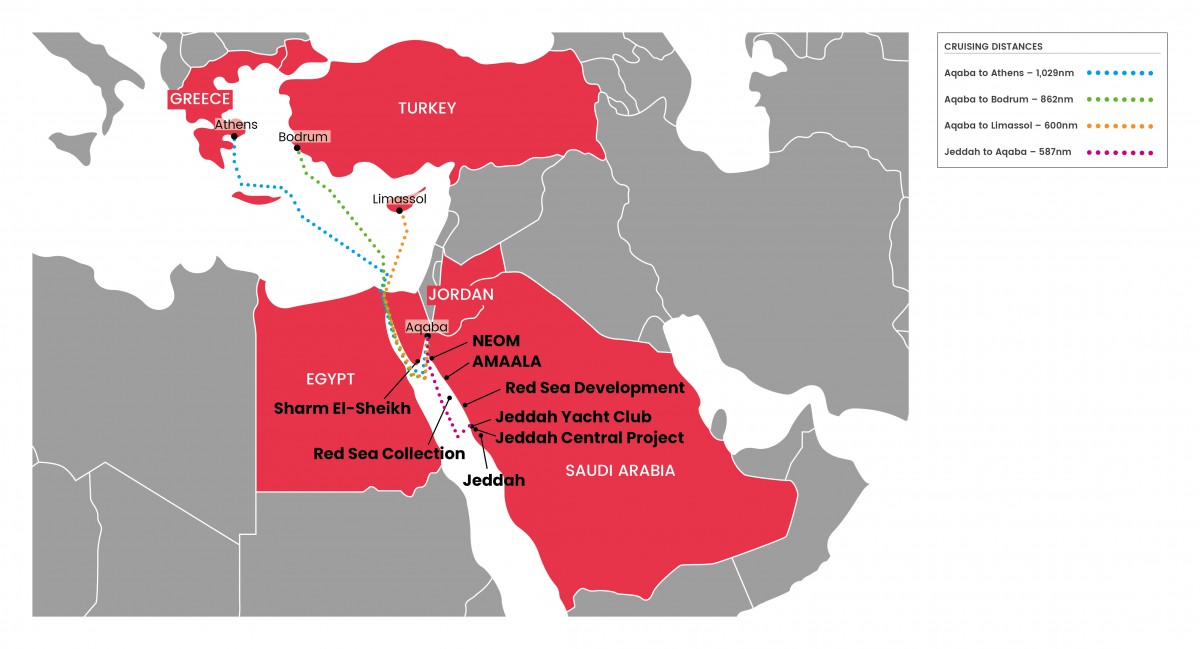 The Gulf of Aqaba is no further away from London than it is from Mumbai. As seen in the map above, The Jordanian port city itself is only 600 nautical miles from Cyprus and just over 1,000 nautical miles from Athens. NEOM is expected to be a self-sustaining city and will operate independently from the existing governmental framework of Saudi Arabia, with its laws, taxes and regulations.

The NEOM project is set to transform the Red Sea coast into a major luxury destination and will likely have a positive impact on the future of the superyacht industry. Exciting as it may be, the development requires the vital input of stakeholders in the superyacht industry to ensure that it is designed and constructed in the most sustainable and efficient manner possible with regard to luxury sports and recreation.

We would like to offer our loyal readership the opportunity to put forward their perspectives and opinions on the aforementioned projects. The survey embedded at the beginning of the article (which can also be reached through the link here) will only take a few minutes of your time and will be used to better understand the attitude, appetite and appreciation of these incredible new destinations.

The answers to the surveyor may be completed in complete anonymity, however, we will also be offering our readers the opportunity to provide qualitative data via quick interview. For more information on the NEOM project visit the website here…