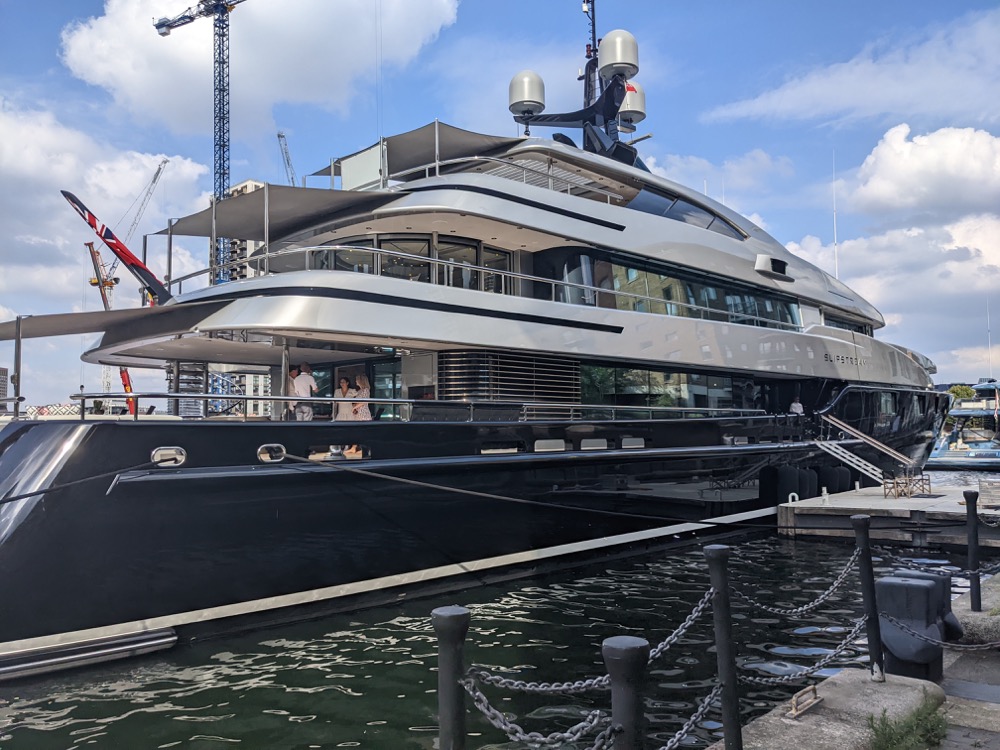 Believe it or not, it's not very often that I get invited to have lunch on a 60m superyacht. I admit, walking down the dock, I was very excited, and despite my attempt to remain impartial and pretend like it was just another day in the office, I knew deep down how ridiculous it all was. For perspective, my previous experience on superyachts had been as a day worker, cleaning the engine rooms with a toothbrush and draining the bilges with rags. Therefore, when reading this food review, bear in mind that I’m not quite of the same ilk as the typical charter guest who pays over 285,000 pounds a week to enjoy this yacht's services. However, what I can offer is an honest perspective, a solid understanding of why this charter yacht is so successful, and a candid food review from someone that's never had champagne-poached oysters before. 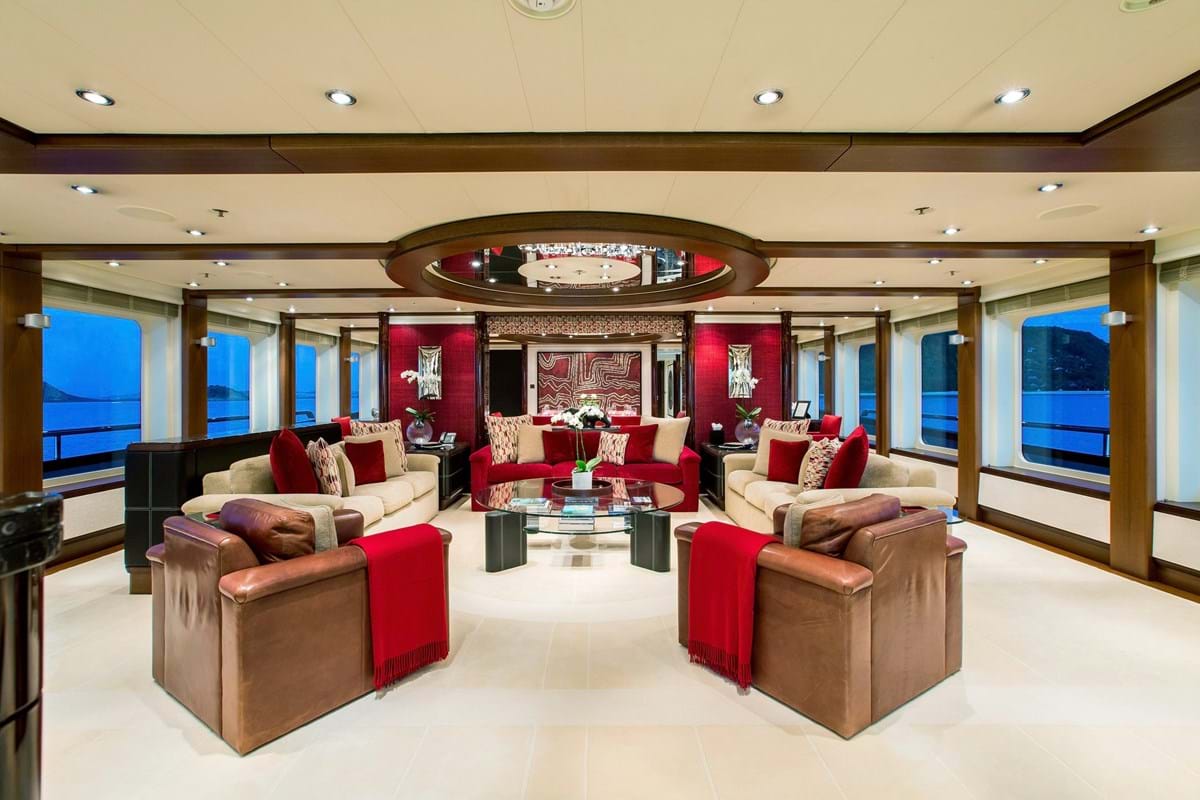 Firstly, I should point out that the interior of this yacht is quite unique and refreshing. The owner of Slipstream, a Canadian hailing from British Columbia, is a big fan of tribal design and aboriginal artwork. Thankfully though, it hasn’t been overdone. Crimson and maroon red are the primary colours in the main salon, and there are a few standout pieces of artwork, such as the one-off totem pole by Stanley Clifford Hunt that runs up the staircase.

Up on the bridge deck, where lunch is served, the interior is slightly more relaxed and features light earthy tones. The dining table is in between the interior and exterior, and we had an uninterrupted view of Canary Wharfs South Dock, but I could see how a Caribbean sunset or an Icelandic glacier might top that. 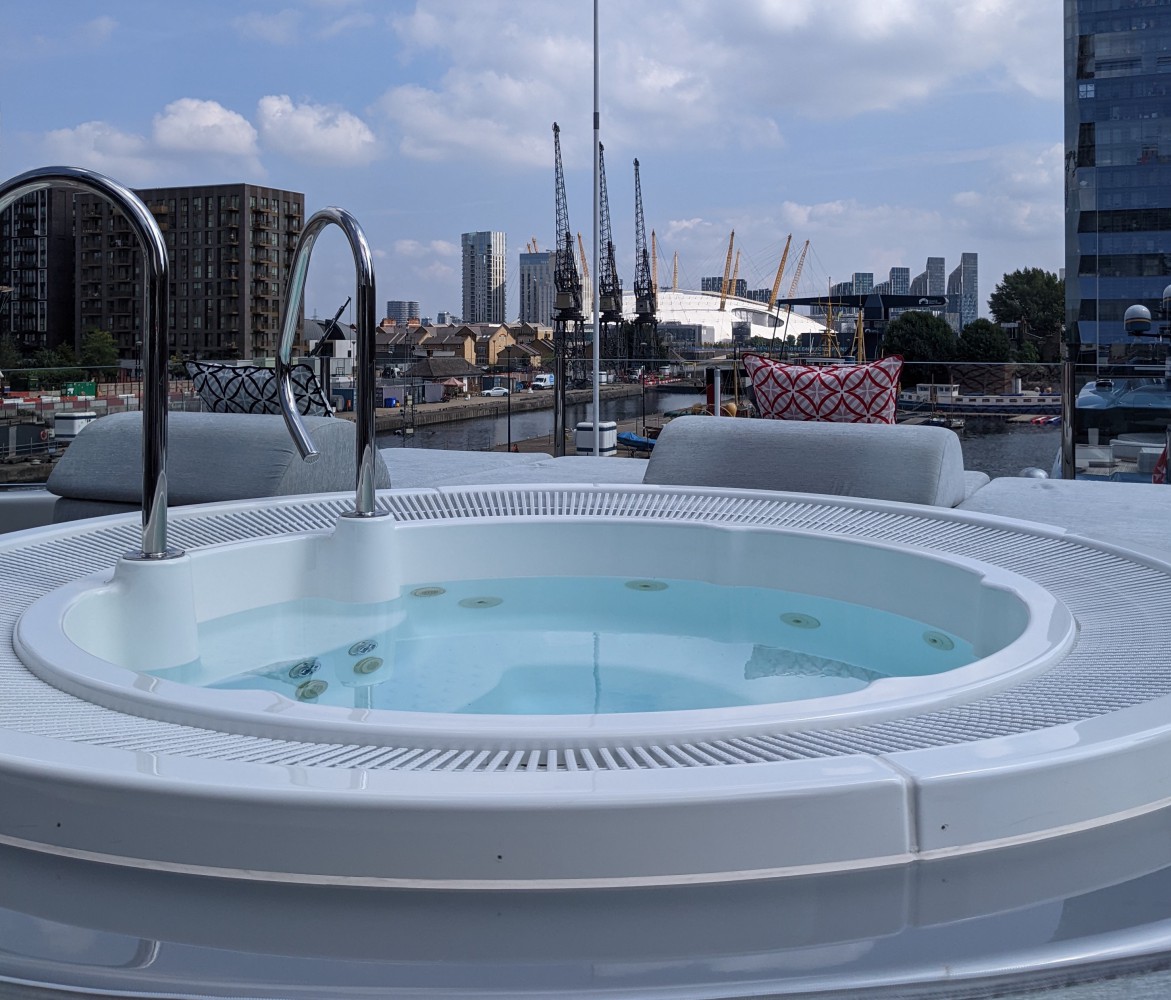 After guzzling a few flutes of champagne and finishing up small talk with the other journalists, we headed up to have lunch. First up, was the champagne-poached oyster, complemented with a dash of pickled radish and a dollop of hollandaise sauce. I was slightly apprehensive. I wasn’t sure if the dead mollusc would agree with the Co-op cheese and onion breakfast roll already in my stomach. But the peer pressure was too much, a few around the table had already gracefully necked the slimeball and were already nodding at each other in agreement. In the corner of my eye I saw the Chief stewardess standing in the foreground watching us, she could tell I didn’t know what I was doing, so I grabbed the golden teaspoon, shovelled it out of it's shell and knocked it back in one fell swoop. 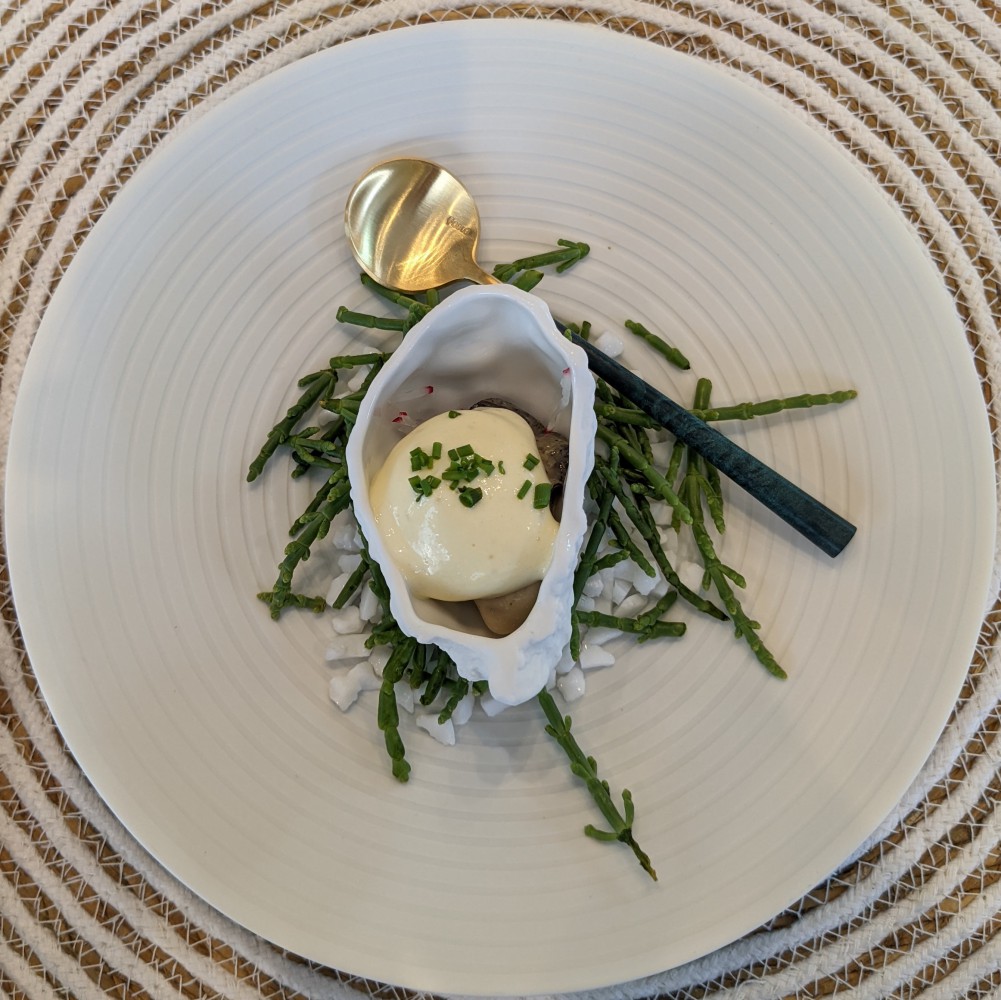 The first flavour was the hollandaise sauce, familiar, reliable, and easy on the tongue. Then I started to chew (which apparently you are not supposed to do), and then all of sudden I could taste the sea. It was tasty and smooth though, it didn’t have the aggressively salty and harsh, crunchy yet soft, texture that I expected. Then the pickled radish hit, and that was the flavour that remained after all had been swallowed. And just like that, the first meal was over, with just one bite. Definitely not the kind of dish I’m used to eating.

Later I learned that it wasn’t the kind of meal the chef was used to making either. Richard Harrison, or ‘Tricky’ as he prefers to be called, came up with the recipe on his own, ‘There’s always a bit of champagne left over on the yacht so I thought I’d poach them in that for a bit.’ Tricky, like all the best chefs, learned his trade through climbing up the ranks in modest, proper kitchens. 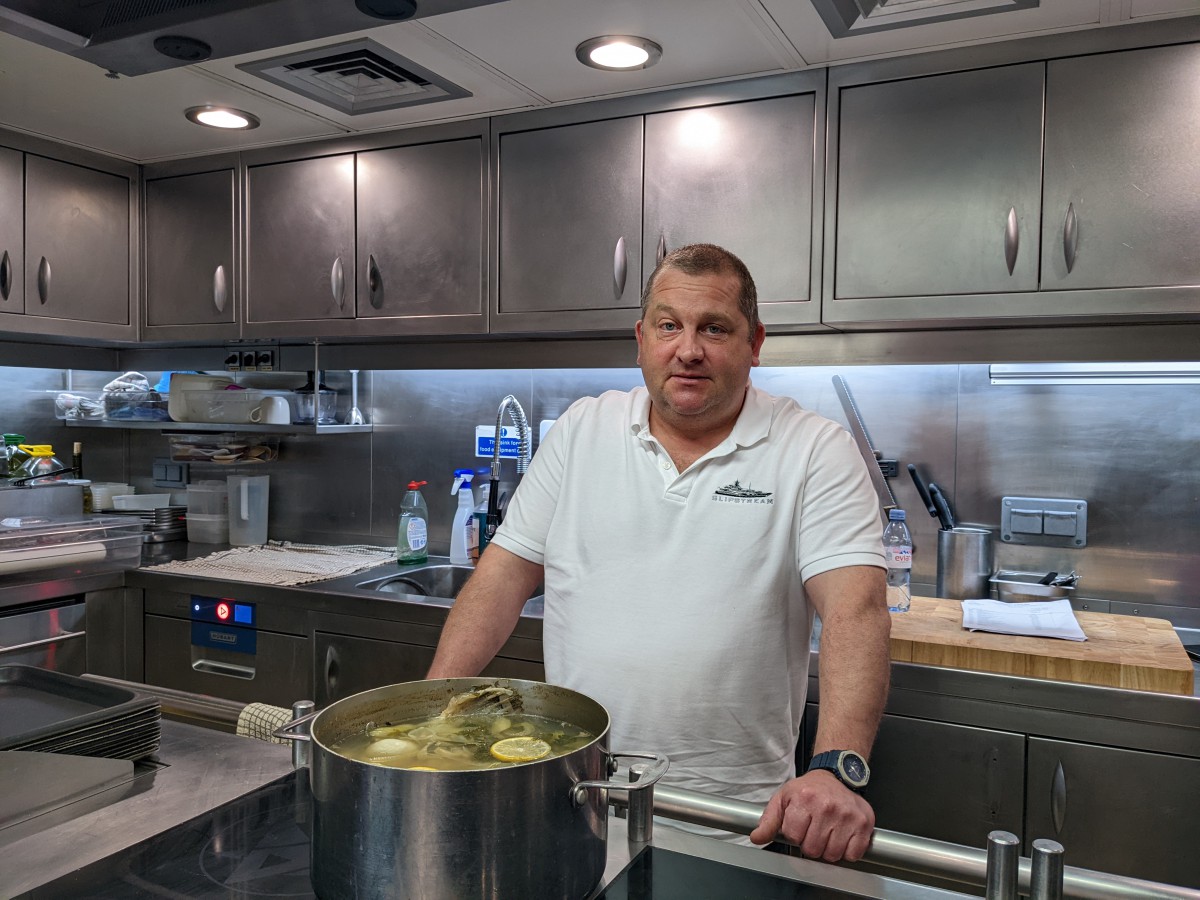 His craft and philosophy has not been tainted by some culinary school that churns out Hilton and Fairmont Head Chefs who see food as little more than cost per unit. He experiments with every meal, uses locally sourced ingredients, and adapts to the culinary traditions of his environment. Having spent nine summers on one of Burgess’s busiest charter yachts, it’s fair to assume he has picked up a few tricks of the trade that not many other Chefs in the world can relate to.

The next meal was a ham hock and leek terrine, with a ricotta-stuffed fig, chestnut mushroom salad, and pickled cauliflower puree. The ham hock was bought from the local market and had been poached in a strong stock for several hours, picked apart, and then put back together in a terrine mould with the other ingredients. The idea for the stuffed figs came from a restaurant Tricky had visited in Italy a few summers ago, and the cauliflower puree was a play on piccalilli - a British interpretation of a South Asian recipe. For this meal, I have little more to say except that it was utterly delicious, and that I should have savoured it more instead of scoffing the lot. I couldn’t stop myself from using the bread to mop up the rest of the sauce when no one was looking - although I’m pretty sure the Chief Stew caught me. 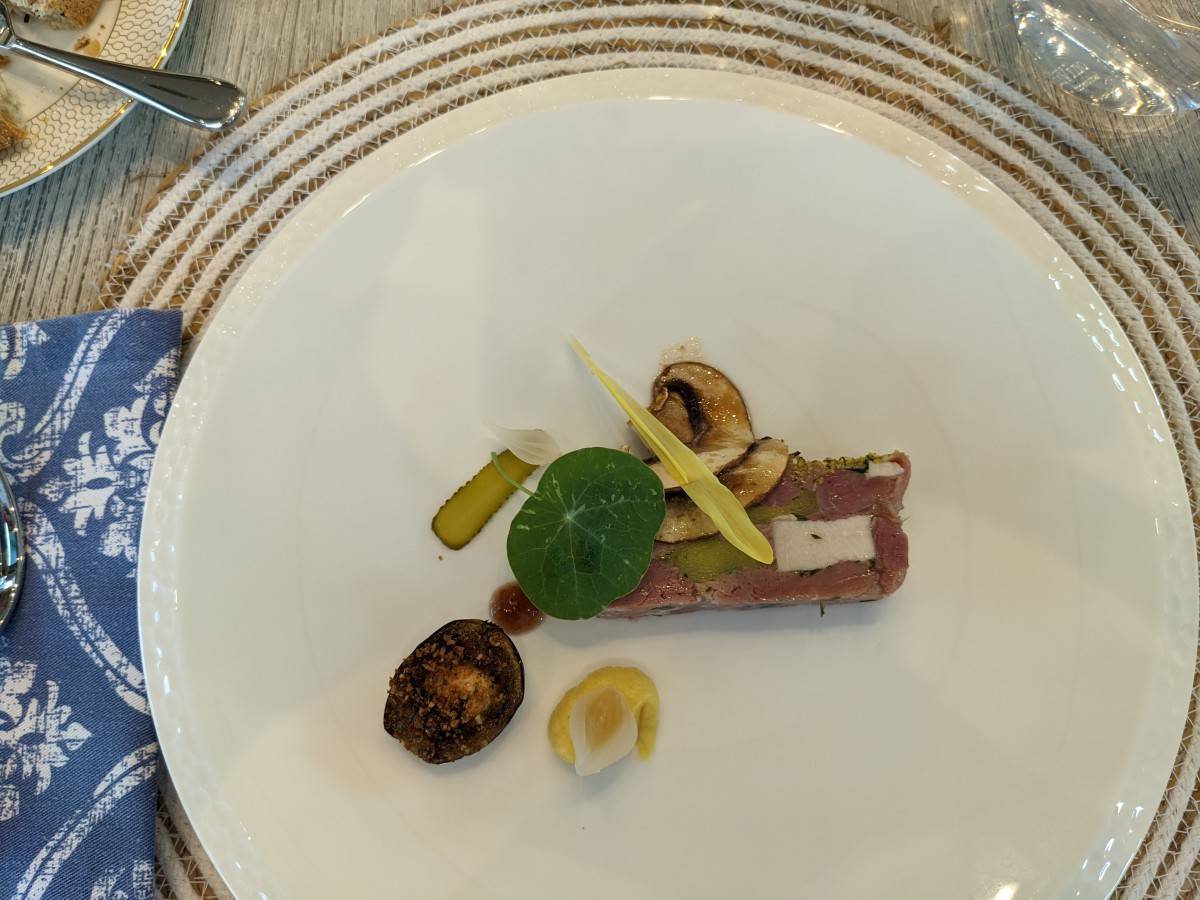 Ham hock is a dish Tricky is more familiar with, it is a staple on the menu of gastro pubs where he first learned to cook. As a teenager, he would see how different chefs would put the meal together while he washed the dishes and chopped the vegetables. He was just 16 when he decided to become a full-time chef, and by the time he was twenty years old, he was already the Commis Chef at the Mandarin Oriental - a restaurant with two Michelin stars to its name. He left the Mandarin four years later, as a Sous Chef, and went on to begin the next chapter of his career in yachting.

The final main meal, was a pan-fried John Dory and lobster ravioli, with samphire and fennel cream, garnished with a sprinkle of caviar - of course. Tricky picked up the John Dory and Lobster from the famous Billingsgate market, which is just a two-minute walk from the yacht. 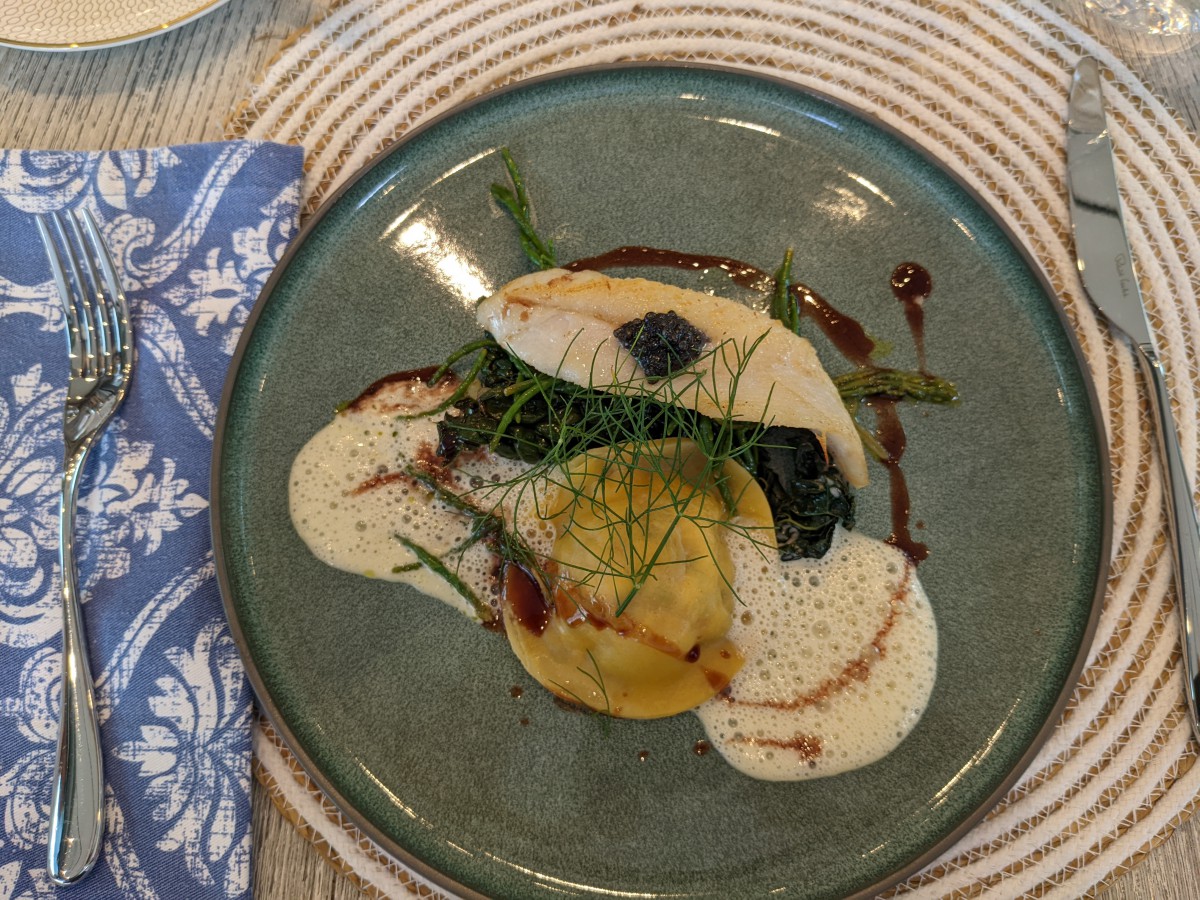 “We had to get it from Billingsgate, it’s been one of the best fish markets in the world for the last four hundred years, and that fish you ate was probably gutted by someone at 1 or 2 o’clock in the morning” Tricky explained, “It's a bit of an old school meal, something I would’ve seen at the Mandarin twenty years ago, but sometimes it's better to keep things classic and simple.” For this meal, I’m glad I did manage to savour every bite, I was the last one to finish.

Dessert was a roasted white chocolate parfait, raspberry and nougatine with chocolate sorbet and feuilletine meringues. I didn’t know what half of the stuff was on the plate while I was eating it. I recognised a couple raspberries and the sorbet, but everything else was new, and that made the dish quite exciting. Every bite was a texture and flavour I’d never experienced before, and it made the process of eating it quite fun. The meal finished with a few more glasses of wine, a few good stories around the table, and a brief visit from Tricky, who was very well-received by the table. 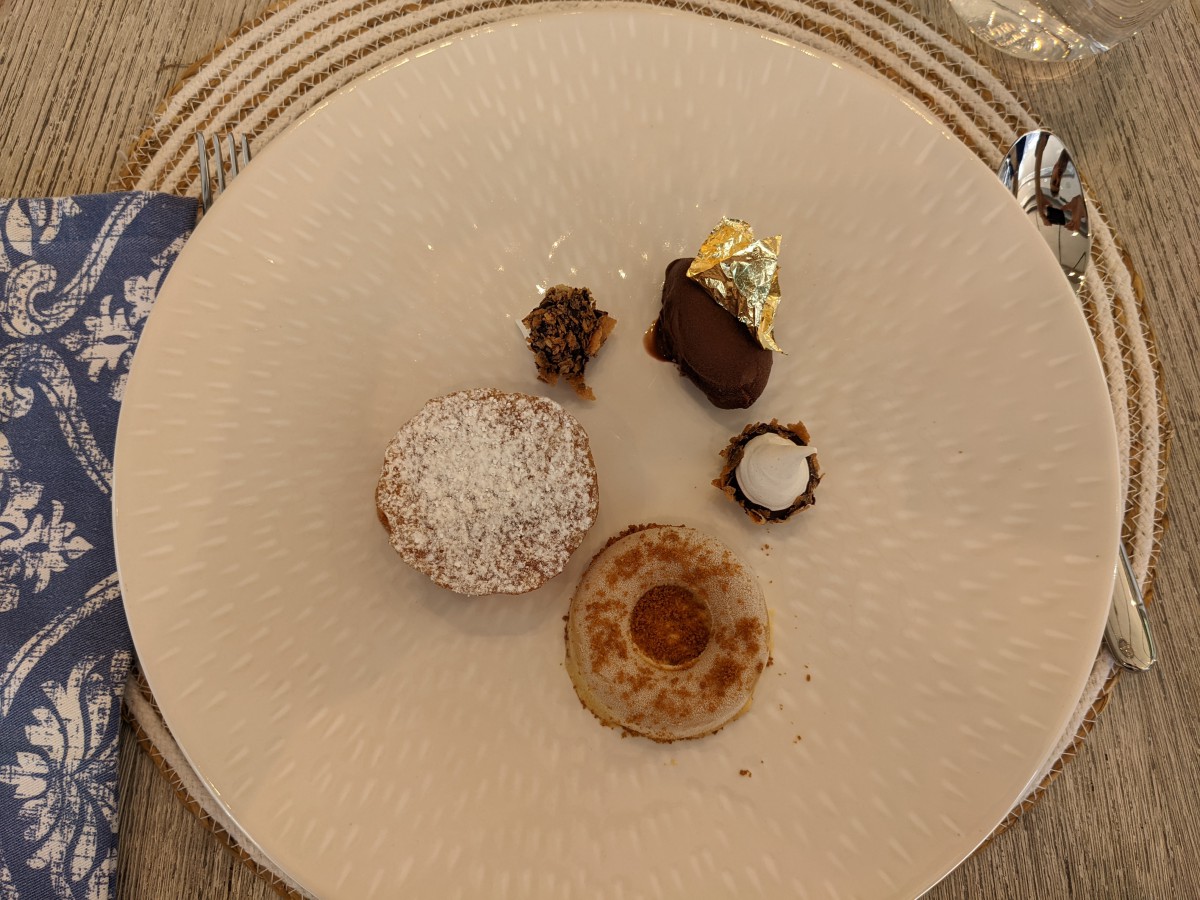 After the meal, it was made clear to me why Slipstream is one of the most chartered 60m superyachts in the world. It is not necessarily just because of the jacuzzi, and toys and lavish cabins. It's largely because of the crew on board. The two Captains have a combined experience of over twenty years on board Slipstream, Tricky has been on board for nine years, and the harmony between the rest of the crew is almost infectious. On their last charter, in Norway, the guests helped the Chief Officer hatch a plan to propose to one of the Stewardesses in front of a waterfall. She said yes, and was very proud to show us her ring and share her side of the story.

Considering the price to charter per week, and the fact that we spent three hours on board, the experience should have cost six thousand euros, which is one thousand euros for each journalist. It is a lot, I know, but it is a treat that is so unique, and so worthwhile, that it makes you realise why someone who can afford it, would want to experience such a luxury with their family and friends. A great yacht, with a happy crew, and even happier guests. 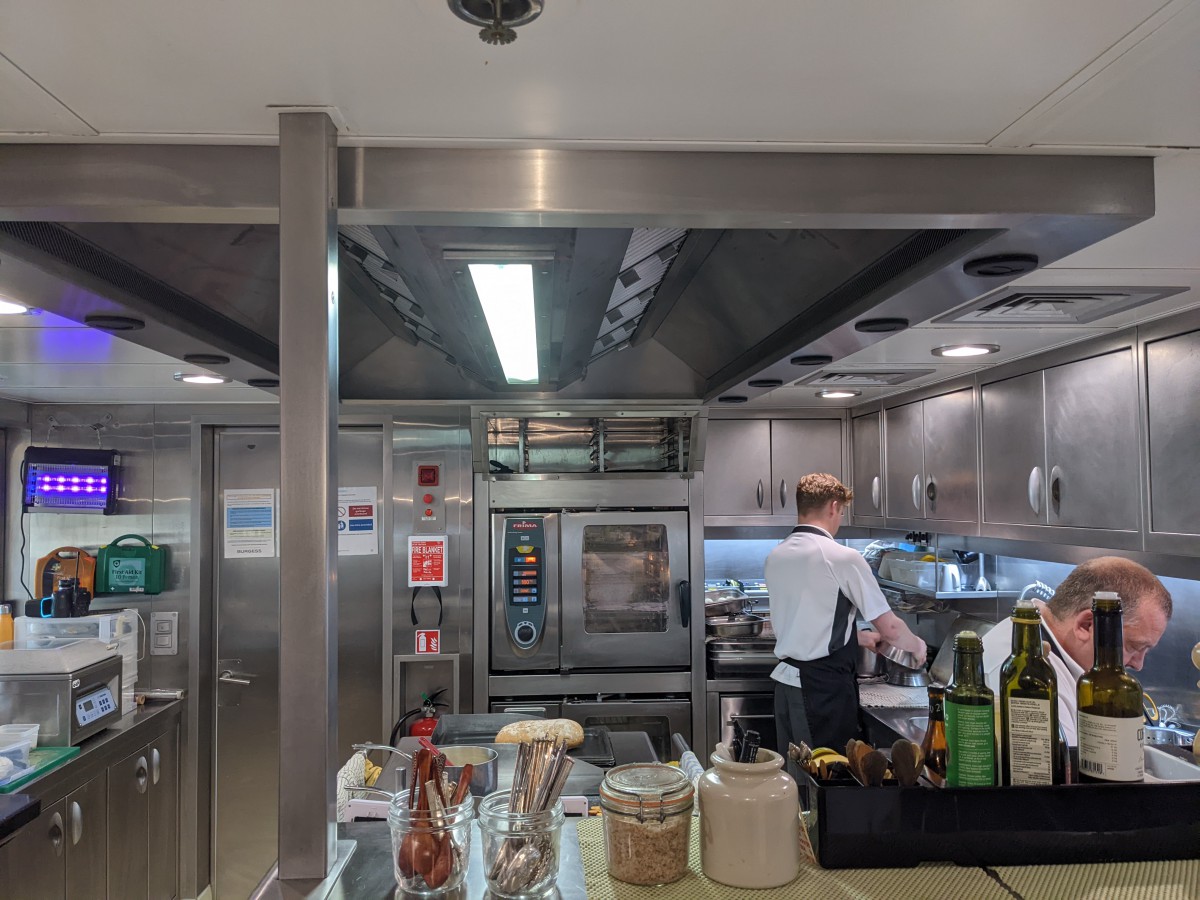