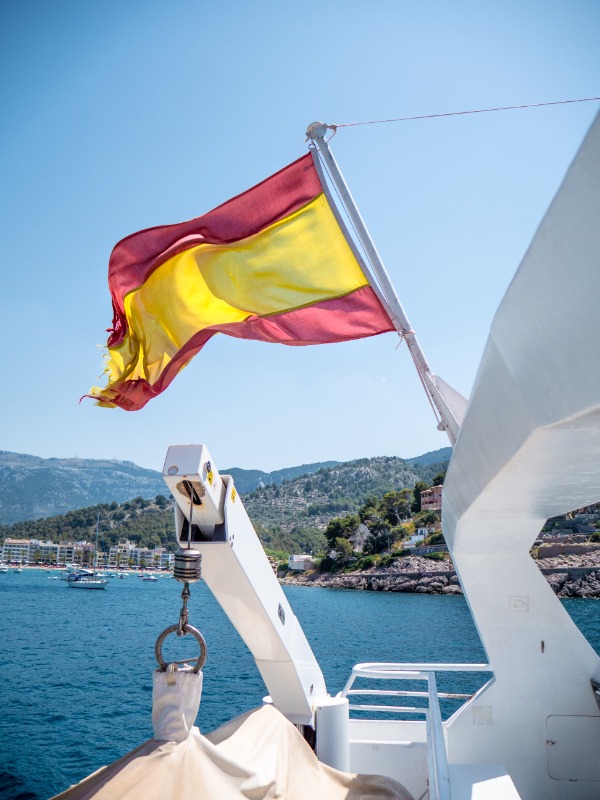 Spain in general and the Balearic Islands in particular are, in many cases, one of the most preferred destinations for clients chartering large yachts. However, this in no way implies that Spain is necessarily a ‘leader’ when it comes to yachting tourism in the Med. After all, Spain is often widely surpassed by the likes of France and its popular Côte d'Azur, Italy, and the highly regarded Amalfi Coast, or even emerging destinations such as the Adriatic coast, which is attracting a large part of the market.

The reasons are undoubtedly found in the regulatory framework applicable in both countries which, in the case of France for example, undisputedly favours it for many reasons. The Spanish administration, together with the Spanish Yachting Association (ANEN) and the Spanish Large Yachts Association (AEGY), has been making an effort since 2013 to bring us closer to our main European competitors, however, we are still far from being able to compete or, simply, to facilitate the activity and let the market flow towards its preferred destination.

On 31 October 2013, we achieved a fundamental change: the elimination of the maximum length of 15 metres to be eligible for exemption from the IEDMT (Special Tax on Certain Means of Transport, better known as Matriculation Tax -MT-), provided that the boats and vessels were effectively and exclusively used for charter activity in Spain. The MT on pleasure yachts and vessels does not exist in any other country that is part of the European Union (EU). Prior to this milestone, the market for large yachts in Spain was non-existent.

The second major change came after the negotiations that ANEN and AEGY held with the Directorate General of Ports and Airports which culminated in Circular 1/2014, which allowed for the chartering of non-EU flagged vessels for the first time - a matter that was already commonplace in most competing EU countries such as France or Italy. The importance of this change stems from the fact that most large yachts are registered outside the EU, perhaps with the exception of Malta.

Therefore, only since the summer of 2015 has it been possible for large yacht owners to even consider chartering their vessels, albeit…only in the Balearic Islands! If anything, this proves the nascency of this niche market in Spain. Shortly afterwards, Barcelona and, finally, the rest of Spain, ended up adopting the path that was already open in the Balearics and which, fortunately, took root in the legal system of the Balearics through Decree 21/2017, regulating the charter activity of pleasure boats and vessels.

So, what are we lacking to be the Mediterranean hub that our own customers demand? We could go into detail on many points of improvement but, in my opinion, only two aspects would fundamentally change the landscape:

Allowing commercial yachts to be imported into Spain.

Currently, these yachts, when returning from the Caribbean crossing the Strait of Gibraltar to carry out their commercial season in the Med, are very wary of stopping on our coasts,  and instead, choose to head for the south of France to be imported by means of the mechanism known as 'reverse charge'. To save technicalities, this allows them to enter EU territory without incurring any financial cost for VAT and without the deductibility of import VAT quotas being in any way questioned, given their status as entrepreneurs engaged in the commercial charter activity.

This 'reverse charge' mechanism is provided for in the VAT Directive and in the Spanish Value Added Tax Law, but Spain does not allow the financial cost of VAT to be neutralised and, what is worse, questions the deductibility of VAT quotas on importation on the grounds that yacht charters are 'private pleasure navigation', ignoring the commercial charter activity carried out. In this way, vessels are prevented from calling into Spain, absurdly losing the generation of income and employment in Spain, which is why my French colleagues ironically congratulate me and beg me to maintain our fierce defence of their interests.

The mere alignment of Spain with the criteria adopted and applied by France would at least assimilate Spain to sailing hubs of yachting in the EU as France or Italy are. All that is needed is a minimum dose of political will and a desire to take advantage of our privileged geostrategic location as a gateway to the Mediterranean. The only applicable rules are the VAT Directive and the Union Customs Code (UCC), both common to all EU countries, and there is absolutely no legal impediment to this.

Failure to do so means wasting our competitive advantage and slowing down the development of an economic sector that has spectacular multiplier coefficients on employment, production and gross value added. As an example, for every job generated in the yachting industry, 4.2 additional jobs are generated in the Spanish economy (the average for the Spanish industrial sector is less than 1.4).

As we have already mentioned, the MT on pleasure boats and vessels does not exist in any other EU country and consists of no less than 12% of the value of the boat, to which, logically, 21% general Spanish VAT rate is added. If you want to buy or import a boat over 8 metres in length, whatever flag it flies, be prepared to face a tax burden of 33% - by far the highest indirect taxation in the world.

However, we have mentioned that it is possible to apply for exemption from MT for those yachts dedicated effectively and exclusively to charter activity in Spain so that, to operate in Spain, it should not be a major inconvenience for them to apply for and obtain this exemption, prior to the start of the activity.

Unfortunately, this is not always the case, since the poor drafting of the legal text has given and continues to give rise to surreal interpretations as to the accrual or not of the tax, generating a great legal uncertainty that keeps many responsible shipowners away from our waters.

To give you an idea, a foreign shipowner who wants to operate his commercial yacht on charter in Spain during the summer months cannot use it for a single minute, even if he pays the same rate as a third-party client and, of course, the applicable 21% VAT, which will be paid to the Spanish Treasury. Until 28 March 2014, he could use it without any problem, logically paying a market price and the corresponding VAT (remember that it is a commercial vessel). What has changed in the regulations to bring about this essential change of interpretation by the Directorate General for Taxation? I will tell you: not a single comma.

On other occasions, it has been considered that a foreign shipowner did not have to pay the MT as they only had a second private residence in Spain, although it is not advisable for them to obtain a holiday rental license because, in that case, they would be liable for MT. Nor would I recommend that they set up a subsidiary of their German parent company in Spain because, if they were a shareholder and director of this subsidiary, they would become the owner of the disastrous 'establishment' in Spain and would then be also liable to pay MT (cheers for the EU principle of free movement of capital!). This would also apply if the individual also owned a hairdresser or a clothes shop, due to the concept of 'establishment'- not 'permanent establishment'. Although we have also seen changing interpretations on this topic- is clearly defined (allow me the irony) as 'a place from which all or part of economic activity is carried out', and this gives rise to all kinds of arbitrary interpretations. You may ask, but…what does a clothes shop have to do with the payment of the MT on a yacht? I share your concerns and I find it completely absurd.

The MT is also a state tax whose collection corresponds to the regions (e.g. the Balearic Islands). Recently the Governing Council of the Balearic Islands has approved a budget of €7,133 million for 2023 (the highest in history), our islands will collect about 3 million for MT on yachts. Is it worth maintaining this tax? Clearly not. The low revenue would be more than offset by the increase in tax revenue from a significant growth in activity and employment (skilled and therefore well-paid) in the yachting industry. It is clearly a 'win- win scenario'.

Notwithstanding the above, it is clear that the removal of the MT carries a high ideological burden, so it is perhaps more realistic to replace it with a different tax that, while maintaining the current meagre tax collection of the MT, works as a periodical tax (e.g. annual), i.e., distributed over the useful life of the yacht, similar to what happens with the tax on motor vehicles (also known as 'Road Tax'). In contrast to the one-off accrual of the MT, which gives rise to the total tax liability at a single, specific moment, the periodical accrual would substantially reduce the initial tax burden and would entail a sustained tax contribution over time. In cases of temporary stays in Spanish waters, the tax liability could be prorated for shorter periods (e.g. weeks).

In short, boating and yachting tourism are sectors that act as powerful drivers of the economy, with very high multiplier coefficients that impact on the whole economy and contribute to the diversification, de-seasonalization and de-concentration of traditional tourism, characterised by high purchasing power, high average stays and low consumption of land, a critical factor especially in the limited territories of the islands.

The potential for growth is formidable, and we should not waste our unbeatable geostrategic position and our natural attraction for lack of fiscal competitiveness, especially when the instruments for this are at our disposal and the effort to be made is reduced. All we must do is want it and desire it.

Melilla and charter under temporary admission

Buying into the UBO brainstorm