A secret expedition to the darkest corner of the Pacific...Luke Passmore, creator of the hit podcast Last Known Position, elaborates… 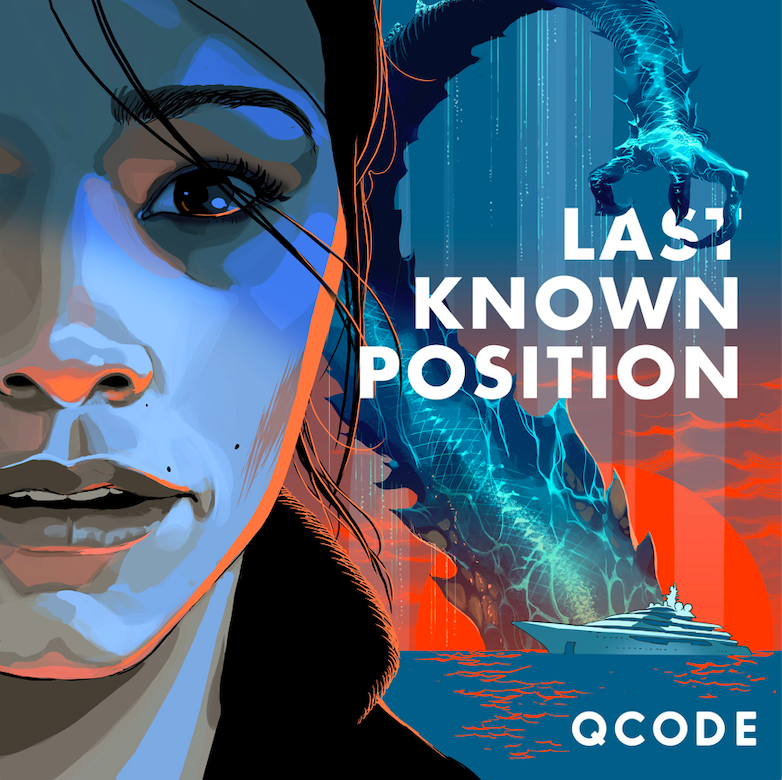 The representation of superyachts in film and TV has never quite aligned with the expectations of industry insiders, owners and crew. Movies about planes can get planes, car chase movies can afford cars. However,  there is an obvious creative and financial ceiling that a production company inevitably runs into concerning the depiction of superyachts on screen. The ambitions of a screenwriter are never met within the production budget. Any production bold enough to set scenes onboard a superyacht usually resorts to one of the few dated charter boats that they can afford, or that will have them. The character may be written as a billionaire, but their on-screen yachts almost always let them down.

The podcasting medium has no such restrictions. As the production values have increased, combined with screenwriting talent and genuine acting star power; the new player in the cultural media landscape is carving out a niche. The artwork for the podcast Last Known Position, from QCode, (shown above), features the unmistakable silhouette of a superyacht, as well as - spoiler alert - a sea monster. Currently lighting up the charts, the series follows a mysterious billionaire who has built a scientific exploration superyacht and has crewed it with specialists and equipment, embarking on an expedition to the darkest corner of the Pacific, after the plane his wife and child were on has disappeared. Things take a thrilling, Easter egg-laden sci-fi turn, that this child of the 80s found enthralling, but I won’t spoil it here.

The tight production portrays onboard life surprisingly well, with the audio letting the imagination paint a vivid picture. Creator and writer of the series, Luke Passmore, joins me from his home in Pasadena California, as we dig into the inspiration for such a unique story. “There's actually a scene in Last Known Position,” starts Passmore "I think it's episode four or five, where the oceanographer character says that; ‘we have more high-resolution photos of the surface of Mars than we have of the ocean floor.' The oceans truly are the last and final frontier. And it's right here on Earth.”

The world of private exploration is growing rapidly, and it is fascinating to hear how Passmore approached it from the outside looking in. “Over the course of my research I went down a few rabbit holes as far as yachts are concerned, and as the uninitiated, my initial thoughts were along the lines of ‘oh Leo DiCaprio has a yacht’ but as I found out, these things are crazy! The size and scale of some of these yachts are incredible. I remember thinking that this is perfect for my story. I saw that these vessels that multi-billionaires build are not always just a vanity project, some have a real purpose and mission.”

“I said to myself," continues Passmore "if the fictional version of Elon Musk or Richard Branson or Jeff Bezos, were to undertake such a private expedition knowing they were going to go up against something unknown and dangerous, they would surely fortify their modes of transportation and, maybe, travel in style.” There was one yacht that, unsurprisingly, was my first thought. And during his research, seems to have resonated strongly with Passmore also: “The yacht that was the biggest inspiration was REV Ocean. It’s pretty amazing. I read about the owner’s vision of scientific and oceanic research, basically wanting to save the oceans. I thought; obviously, onboard, they have the kind of instruments and resources that support that expedition and the kind of story I want to tell.”

Borrowing aspects from REV, as well as yacht concepts such as Valkyrie, Passmore created a yacht that was overflowing with technology and ambition. Because the podcast is an audio medium and not visual, the listener can then fill that space in their imagination. Relying on the descriptions of characters that step onboard for the first time to convey the experience. One memorable line from the main character, submersible pilot Mikaela Soto is: “This is some next level Star Trek s***”.

The interactions between the crew during the series, the description of the equipment and the sound effects make for an immersive experience. Passmore credits advisors like a former submersible pilot, for helping him flesh out the character interactions and idiosyncrasies of maritime dialogue. One point, however, obviously stood out as far fetched science fantasy, and no, it's not the sea creature on the cover. “I say that it took 14 months to build this thing. I don't think that actually could happen, could it? I did justify the timeframe by saying that one of the main characters who designed the ship is also on board in my story! And he says; ‘with enough money and math, anything is possible.’ So that was kind of cheating a bit...Maybe that is the one suspension of disbelief I will ask that of the audience” Passmore says wryly.

QCode has a long history of bringing its hit podcasts to the screen. Series such as Dirty Diana starring Demi Moore and The Left, Right Game with Tessa Thompson, to name a few. My last question to Passmore hints that maybe the next step for the fictional vessel is a silver screen adaptation? “I, as well as QCode, definitely stand behind the podcast as its own thing. We're very proud of it, it is its own story, and it's out there for the world to enjoy. But it would be pretty cool to hopefully one day have people see this story in all its grandeur. And you know, see whatever superyacht that that production can come up and can design! I think it's probably out of the budget to actually build the boat, unfortunately…Perhaps some CGI!”

However, the potential adaptation takes shape, the experience via audio, even during the journey down the sci-fi rabbit hole, feels genuine. In my opinion, it creates a more a more realistic representation of the growing exploration, scientific and philanthropic side of the superyacht industry than any series of below deck or the majority of media coverage. Last Known Position from QCode media can be found on Itunes, Spotify and most major podcast providers. It’s worth the escapism and gets this journalist excited to get back out there into the Pacific. Sea monsters and all.

San Diego - at the heart of the West

Once you hit the Pacific, turn right