Behind the world-class refit centre development in downtown Auckland… 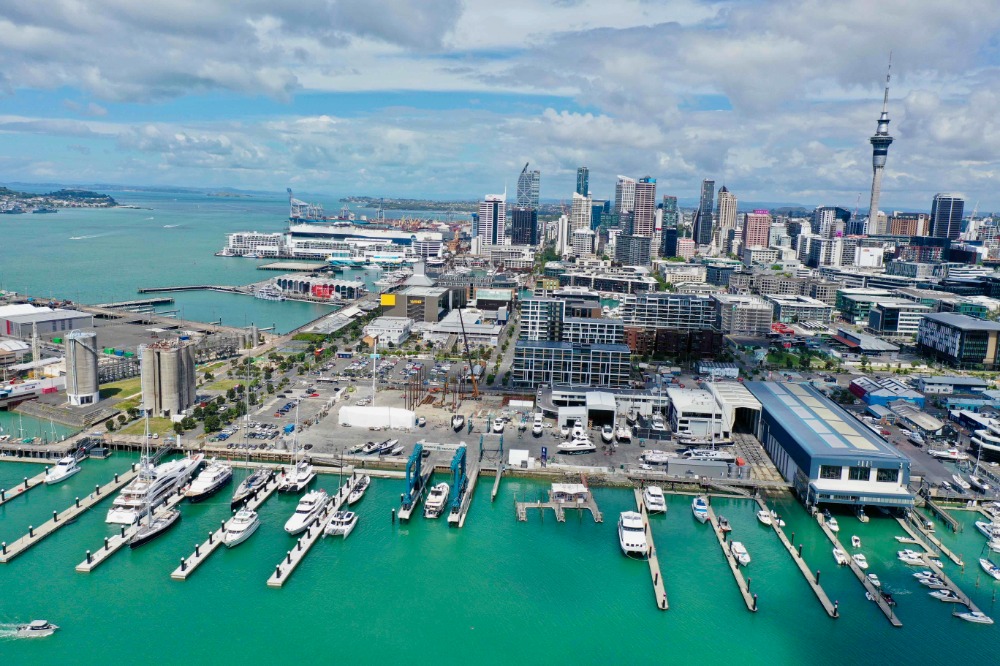 Westhaven Marina has come a long way in the 13 years since I was a student divemaster working there between lectures at university. Built in 1940, it is now home to 1,800 recreational boats, four yacht clubs and a wide variety of marine businesses and hospitality. It also holds the title of the largest recreational marina in the Southern Hemisphere. Central to its evolution has been Orams Marine. In the midst of a substantial expansion of the facilities, I caught up with Craig Park, Orams Marine's managing director, to have a look around, and see how far the Auckland refit sector has come.

Something that was hard not to notice upon returning to Auckland, and reiterated in many conversations with stakeholders here, is the number of mid-range semi-production yachts that are based here, and ostensibly owned by Kiwis. This, Park explains, has kept his team active through the Pandemic affected years. “We have stayed surprisingly busy,” starts Park. “Realistically, we are targeting a return to a full refit season in the summer of 2023/24. The lack of clarity around the border means that many yachts are already booked up for the next season, which is a shame.” 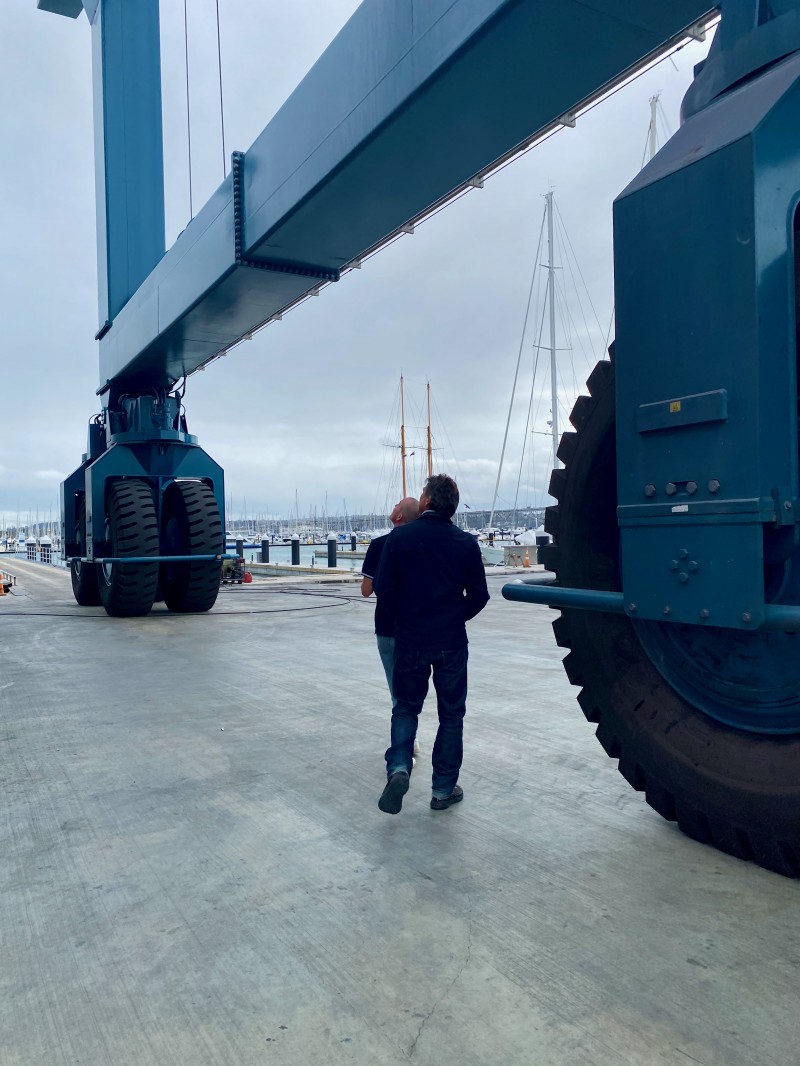 Park reiterates that there is still lingering frustration, from Kiwi owned yachts, as well as international, that despite intentions, they are still unable to commit their yachts to Auckland due to the maritime boarder restrictions.  Additionally, with the strong growth in the domestic market, and with the expected return of international vessels, without expansion, the region may reach capacity.

In recognition of the growing demand, Orams Marine has installed a custom-built 85m 820T travel lift. Park explains that his initial projections for the use of the system were bi-weekly, but even accounting for the decrease in international visitors, it has seen three times that amount of haulouts. The slipway itself is facing the large building site that will eventually house the new painting sheds and office complex, due for completion by late 2022 or early 2023.

Walking around the Oram’s facility is reminiscent of the large specialist yards in Europe in terms of scope of works, with Park going on to explain that Orams Marine has identified its niche. “We know that the meat of the market is 45m to 65m, so that is how we have set up our shipyard for haulouts. We can take larger for in water works, but this size range represents a lot of the yachts that have the capabilities and desire to come down to New Zealand, as well as the size range of an increasing number of Kiwi owned yachts” Says Park. This increase in capacity means that Orams Marine has nearly tripled its large yacht haul out and workspace capacity, from four to 11 yachts. Offering a full refit service option, the inclusion of the two 60m by 24m painting sheds, marks a significant growth metric for the Kiwi refit sector. 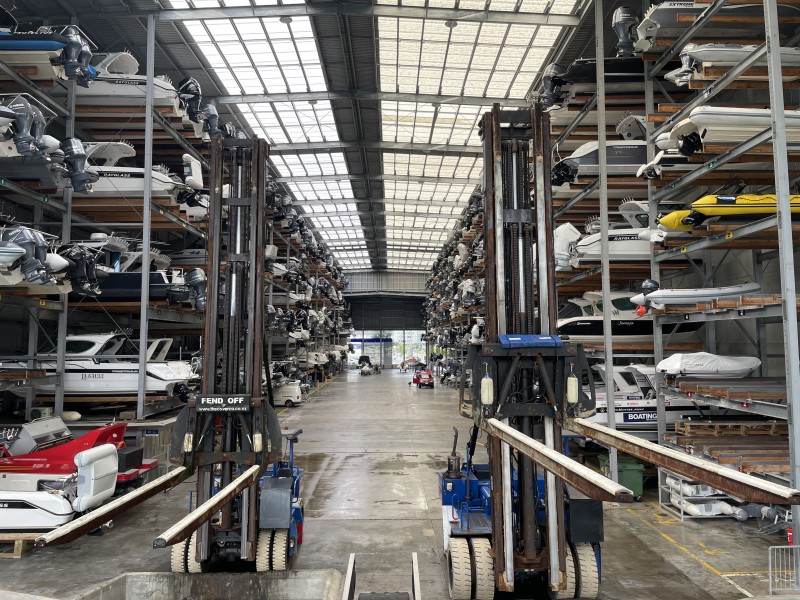 By international standards, the Waitematā harbour is relatively pristine. There are not many waterways that are as centrally located within a major metropolitan city where one can catch your legal limit of table fish a stone's throw from the commercial port. Part of this is down to the environmental controls that the marine industry in the area has implemented.

The water treatment system at Orams Marine is hard to miss. The massive purpose-built steel holding tanks are part of an in-built water treatment plant that separates and treats wastewater and stormwater collected across hardstand and covered work areas. The Orams Marine team worked with sustainability experts prior to the build’s start, with the goal of setting a new shipyard industry standard of discharge water quality, protecting the Waitematā Harbour and New Zealand’s environment long-term.

All too often in yards, the water runoff is an uncontrolled byproduct of shipyard operations. To tackle the issue, Orams Marine designed the hardstand area to channel water into two separate sub-catchments. Wash water passes through a filtration system, with solid contaminants removed and sent to landfills and the water recycled for marina operations or public sewer. Stormwater run-off’s residual contaminants run through a two-stage treatment for suspended solids and dissolved heavy metals are removed.

Orams Marine operates with a subcontractor model for works. The Kiwi boat building market trade skills and intellectual property was not lost when the like of Alloy Yachts shut down but assimilated into residential and specialist companies. Park, and others, have stressed that this quality of craft is still readily available and reflected in the standard of works undertaken.

Refit yards, Park asserts, are highly reliant on word of mouth. Especially true for a yard that is offering full re-sprays of topsides. Not many owners and guests comment on the engine rebuild or the antifoul, but a section of orange peel that catches the light during an Antiguan sunset can be highly damaging to the reputation of the yard where it was painted.

“With a recent respray, we actually decided we were not happy with its finish, even after the captain had signed off on it. We want it to be perfect and are willing to take on the cost to do it. It is a long way for boats to come down here, and we want to deliver the best possible service.” Says Park

Auckland, with my biases somewhat placed to one side, has a unique offering for refits. Yachts that spend the Southern Hemisphere winter cruising the Pacific can then head south for more warm weather during the summer refit season in New Zealand. The first cruises and sea trials take place among the many islands of the Hauraki Gulf, and the New Zealand cruising season extends through March and into April, allowing charters to still take place. The South Pacific refit program is a perfect counterbalance to the long Mediterranean winter and traditional refit schedule. Orams Marine has created a world-class facility in downtown Auckland, adding to the growth and maturation of the region's superyacht infrastructure.

Putting The Sea of Cortez on the superyacht map