Superyacht Fleet Overview and Launches: May 2014

As it typically is, May was an extremely busy month for launches, the biggest of which was the 66m Granturisma from ISA. Good news also came in the form of several new orders, including a second 48m SuperSport for Palmer Johnson...… 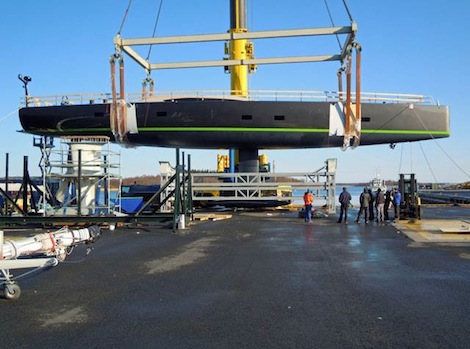 Superyacht Fleet Overview and Launches in May 2014

As it typically is, May was an extremely busy month for launches, the biggest of which was 66m Philmi from ISA. Good news also came in the form of several new orders, including a second 48m SuperSport for Palmer Johnson.

Foam - The Italian Sea Group launched a new motoryacht from its Admiral Custom Division, the 35m Admiral Classique 35, which has been named Foam. Read more here

My Sky - Heesen Yachts launched 51m My Sky (Hull 16551) on January 31st. Featuring an interior by Erick van Egeraat and naval architecture by Omega Naval Architects, My Sky will deliver to her owners in November 2014. Read more here.

Other launches in May included: 47m Anastasia K from Benetti; 32.25m Blue Berry from Benetti Sail Division; the Logica 147-01; and 44.8m Latiko also from Benetti.

48m SuperSport - Palmer Johnson has sold a second 48m SuperSport. Mike Kelsey Jr. confirmed the sale saying, “it’s a great affirmation: before we’ve launched the first one, we’ve been able to sell another one. It shows enthusiasm in the market.” Read more here.

Royal Huisman S&S - Royal Huisman have confirmed the signing of a new order, designed by Sparkman & Stephens. Little other details are available other than that interestingly it will be a carbon project. Read more here.

460Exp - Sanlorenzo have undertaken the technical launch of their first ever ecplorer yacht, the 42m 46EXP. Read more here.

Amels - Dutch yacht builder Amels currently has no less than nine luxury yachts at its yard. At the largest superyacht facility in the Netherlands, the six new builds and three refit projects range from 49m to 65.5m. Read more here.

Nautor Swan 105 RS - Construction progresses apace for the Nautor Swan 105 RS, ahead of its summer 2014 delivery. The build process began in early 2012 it is the first Swan 105 project that allowed the technical office to prep solutions before producing the component or system. Read more here.

Tankoa S693 - Francesco Paszkowski, who is responsible for the design of the recently resurrected Tankoa S693, has spoken about re-embarking on the project, and the newly agreed upon interior. Read more here.

Nariida - RSB Rigging Solutions project manager, Mark Timmins will once again be heading up to Finland to the Baltic facility to re-step the masts onboard the Wally ketch Nariida. Read more here.

IMS - IMS Shipyard has secured a thirty-year lease agreement that will allow it to develop a new site, IMS 700. Upon completion the site will increase IMS' berthing to 100, accommodating yachts up to 80m. Read more here.

Italian Sea Group - Admiral Tecnomar has extended its building capacity to 90m, with the purchase of a floating barge.  Read more here.

Full specifications of all yachts covered can also be found in our online records at SuperyachtIntelligence.com, which are fed daily by our dedicated in house research team.