SuperyachtNews analyses the 40–60m Feadship re-sales for 2016 against what is currently on the market.… 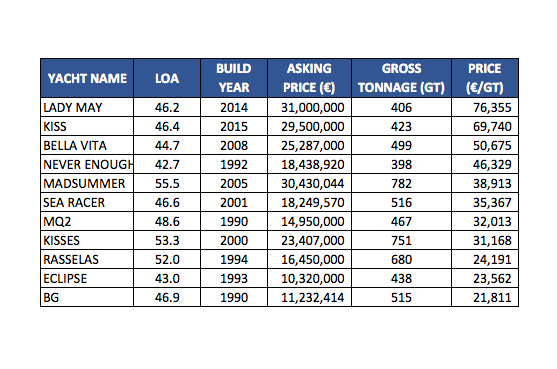 When you consider that five of the nine 40–60m second-hand Feadship sales in 2016 were on the market for less than a year by the time they were sold, the brokerage market would appear resoundingly composed and serene. But, let’s be honest, do brokers representing the sale of a Feadship need to rely on data to be told that their appointment as CA is likely to be a smooth transaction?

Looking at the performance of the Dutch-built yachts on the re-sale market in 2016, it looks to have been the older Feadships that were particularly popular, much like in years gone by. From the nine 40–60m sales, the average age of each vessel sold was 26-and-a-half years old – only two were delivered after 1995.

Interestingly, all nine sales in 2016 were sub-€30,000 per gross ton (gt) at their point of sale. And that is based on final asking prices – actual selling prices are likely to have been lower. For comparison, the table in the gallery shows the 11 40–60m Feadships that are currently on the market (listed in order of their price(€)/gt). As you can see, only three of the 11 vessels are sub-€30,000/gt – and actually rise up as far as €76,355/gt in price – which is a stark contrast to the price of the yachts sold in 2016.

After the sisterships M/Y Kiss and M/Y Lady May, it’s interesting to note the order of the listings with particular attention paid to the ‘build year’ column. M/Y Never Enough, which has a particularly low gross tonnage for her size, and M/Y MQ2, which went through an extensive value-adding refit in 2015 and also has a truncated upper superstructure resulting in a lower gross tonnage, look to be the only vessels that are marginally out of order.

Overall, it's a positive outlook for the Feadship re-sale market. And knowing that there is a liquid market and a good residual value for your vessel further down the line is a reassuring and relatively uncommon position for a modern-day superyacht buyer.

Is now the time to sell your Feadship?