Launched by Vitters in 2016, 33m carbon fibre sailing yacht Missy has been turning heads on the sailing circuit. On board with her designer Malcolm McKeon, SuperyachtNews hears first-hand about the elements and features that have created such a stylish yet comfortable design.

Given the client’s initial brief, Malcolm McKeon perhaps didn’t expect to be discussing the journey from Missy’s concept to design on board during her inaugural participation at The Superyacht Cup Palma. Her owner had been certain that he wanted a comfortable world cruising yacht that was lightweight and fun to sail while keeping his young family protected in a safe environment – there had been no desire to race competitively or partake in any of the superyacht regattas. Yet, here we are after a successful day of racing in the Bay of Palma.

“The drive was never to race the boat – this has all been a big change of plan,” laughs McKeon. “Throughout the design, I kept asking whether racing might be a possibility, and I even suggested that we put reinforcement in the bow just in case he ever wanted to have the option of a bow sprit for racing. But the brief was always for a performance cruising boat rather than a racer. Comfort and reduced noise were the priority and so we had to pay a lot of attention to how we were going to keep the boat quiet, not just in terms of insulation but also the structure.”

“The drive was never to race the boat – this has all been a big change of plan..."

Having previously owned a carbon fibre production boat, the client had originally planned on building a bigger one until McKeon showed him the advantages of building custom. As the particular production yacht he was looking into was at the higher end of the price scale, and what he was being offered in terms of interior layout didn’t suit his brief, he soon realised that he could build something exactly the way he wanted for the same amount of money with a custom build. And so, the initial design for Missy was created.

“In terms of aesthetics he wanted a sleek, low profile,” begins McKeon. “His last boat was flush deck, but I wanted to show him that a semi-raised saloon arrangement could provide a panoramic view while sitting in the saloon without interrupting the yacht’s sleek profile from the exterior – an important feature that I like to include in my designs.”

One of the dominant exterior design features on board Missy is this all-glass canopy, designed to create a light and airy feel in the saloon. The client was initially cautious about whether the feature would cause too much heat on the interior, but was persuaded otherwise by McKeon, who made use of the latest technology in the form of a heat-reflective foil embedded in the glass laminate to keep the heat out and the interiors cool in warmer climates. The result is a spacious saloon that you can sit in and still feel connected to the water and the outside environment. 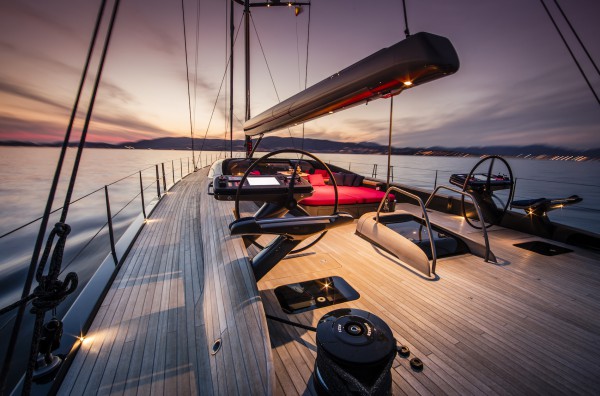 The design and careful layout of the cockpit also played an important part in incorporating the initial brief. “The owner wanted to be able to sit his family in an area that wasn’t going to be disturbed by crew and keep them safe during sailing manoeuvres,” explains McKeon. “Another key elemenet is that the bimini fully covers the cockpit area with an overhang, so that even when the sun starts to go down you are still covered in the cockpit area.”

During the design phase, McKeon spent a lot of time on the smaller details to make sure that aesthetically everything flowed and created a very clean deck. What particularly stands out is his use of teak to do this, with an uninterrupted teak deck rolling up the combings to reduce the number of painted surfaces and give the cockpit area a more organic shape. A lot of time was also spent on the crew companionway – again McKeon rolled teak over this to get rid of the excess paint that you often see on other boats. 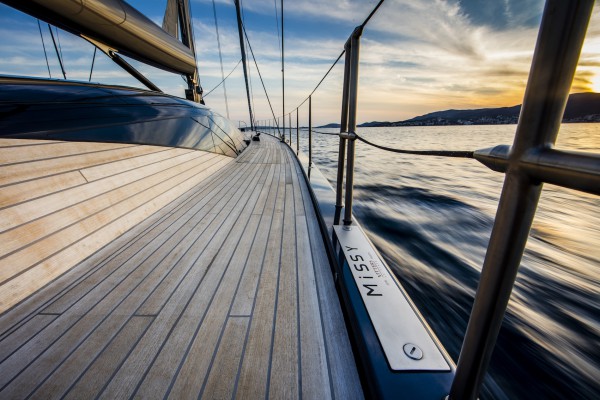 Wanting to design a powerful boat, McKeon designed Missy with a lot of beam aft, which allows more real estate at the back of the boat as well as better sailing performance. It also meant the opportunity to use the same technique in order to disguise the added volume. “It is always a challenge to try and hide the bulkiness of the transom on these sorts of boats, so that was the reason behind the decision to run the teak off the back of the boat,” he describes. “It means that when you look at the transom, you don’t just see a big mass of paint. The teak breaks up the surface area to make the transom look wider and shallower, which I think is more elegant than something more square looking.”

The interior layout is also particularly unique for a yacht of this size. The owner likes to do a lot of cooking on board and so, not wanting him to be stuck away in a galley away from his family, McKeon designed an open-plan galley attached to the saloon, with a TV snug on the other side. The split-level arrangement also includes an office area and seating area, meaning that family and guests can interact whether they are cooking, dining, relaxing or working.

McKeon references one particular challenge of the project as the requirement for a fold-out bimini that was quick and easy to operate so that, at the press of a button, the bimini would fold out of the roof without the hassle of erecting poles and canvas. “It is the first time I have incorporated such a feature on a boat and, because we wanted to keep the profile of the boat low and the headroom in the saloon high, it was a real battle to build the bimini within a certain height,” he explains. “It works brilliantly now, but it did take a lot of fine tuning and extra expense to get the height to something acceptable.”

The owner was also keen to be able to have a long silent period at night, so that he could switch everything off and have just the air conditioning system running on batteries alone. “This was achieved, but at the expense of a lot of extra weight,” concludes McKeon. “As a result, even though I am delighted with the way that the boat sails, she could be an awful lot lighter.”

Now that Missy’s owner has discovered a love for racing and regattas, the next thing for McKeon will be to look at incorporating a bow sprit in order to further enhance her sailing performance. Perhaps that reinforced bow wasn’t such a bad idea after all!

The government has set out the testing requirements for arriving yachts, crew and guests ahead of the 2020/21 season