Summit Furniture played host to the superyacht design community yesterday, as leading names from the design world gathered for The Superyacht Design Summit. This event was the first in a series of ‘Private Conversation’ events that will take place throughout the year. Leading this inaugural VIP event was head of design at Foster + Partners, David Nelson, who was discussing the subject of sustainability, talking the audience through the new – and now iconic – Bloomberg European Headquarters as an intelligent case study.

The superyacht market produces some of the most expensive and excessive products in the world, many of which feature eco-friendly elements as a token gesture. It is essential that we look at how to approach superyacht design in a more sustainable way. The pivotal question at The Superyacht Design Summit yesterday was: how do we change the market place in order to make sustainability a real possibility?

“Sustainability means so many things to different people,” began Nelson. “There is a lot of confusion around the subject, so I want to explain about sustainability in buildings in order to paint a clearer picture of how is interpreted from an architectural perspective.”

Bloomberg have a vast headquarters situated here in London, which they own and occupy, a rare phenomenon in London as most buildings are designed for a developer. “This was an opportunity to work with someone very closely,” says Nelson.

One of the many interesting components to the Bloomberg project was the lighting. Foster + Partners developed a grid pattern of LED lighting, which fills the entire celling. “LEDs produce heat, and a lot of the fittings that you have rudimentary heat exchanges, which shorten the life of the fitting. As a result, we developed a celling system which cools not only the space, but also the lights – so what we have is a water cooled light fitting.” This technology was developed specifically by the Foster + Partners team for the Bloomberg project.

Nelson explained that due to BREEAM agreement, which has been signed by the majority of developed countries around the globe, all new buildings have to become carbon neutral by the year 2025. This means that in the future every new building will have to be the equivalent of what the Bloomberg building is now.

"A loaf of bread is equivalent to one gallon of oil."

The presentation also highlighted the lack of sustainability in each aspect of our daily lives. “Calculations have shown that a loaf of bread is equivalent to one gallon of oil,” said Nelson. “To harvest it, transport it, to process it, bake it in the oven, deliver it to the shop, sell it and deliver it home, all of the energy taken equals a gallon of oil.” This was an example of the importance of sustainable thinking in each stage of the design of a building, as well as its daily use. In the process, energy consumption isn’t necessarily something which is thoroughly considered every day, let alone the environmental impact of the build itself.

Another major factor is the balance between emissions and absorption, “We emit everything that we do from using energy and the greenery and trees absorb it,” explained Nelson. “Deforestation, combined with the increasing emissions, means that these two things are out of balance and they need to be back in balance. If we all, and everybody in the world lived an American lifestyle, you would need five planets to fuel our energy consumption.”

"If we all, and everybody in the world lived an American lifestyle, you would need five planets to fuel our energy consumption.”

The many designers in the audience talked at length about the role of eco-friendly thinking within superyacht design. Inspired by the architectural practices showcased by Nelson, the attendees agreed that a ‘green’ attitude would be very beneficial to mitigate the environmental footprints of vessels. However, there was a general consensus that for the majority of clients, sustainability isn’t high up on the list of priorities.

At the event, it was announced that this year will see the return of Superyacht Design Week at Design Centre, Chelsea Harbour in a new two-day format under the new brand, The Superyacht Design Forum held on the 26 and 27 June 2018. This new format will deliver a fresh, innovative and inspiring mix of brainstorms, think tanks, workshops and social interaction. 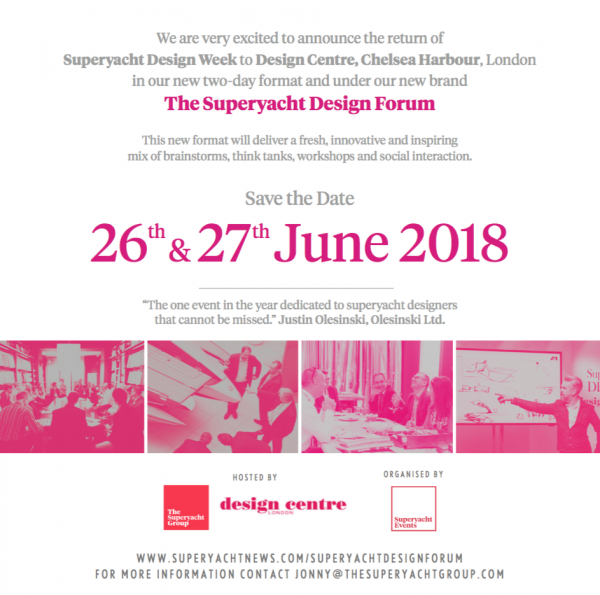