In the lead up to the launch of The Superyacht Report: New Build, we consider a series of metrics that neatly showcase the state of the new build market from 1998-2018, which encompasses the dizzying highs of the mid-2000s and increasingly common lows experienced within the last five years.

The period from 1998-2008 was defined by growth, almost regardless of the metric that is employed to analyse it. During this time (see Figure 1), deliveries grew consistently, from 78 per annum in 1998 to 265 deliveries in 2008, the only minor blip being a fall from 248 deliveries to 234 deliveries per year between 2006 and 2007. However, few today would balk at 234 deliveries in a single year. In conjunction with annual delivery figures, the number of active yards – defined by the number of yards that delivered a vessel in any given year – rose from 78 to 125 during the aforementioned 10-year period, experiencing its own minor decreases in 2005 and 2007. Furthermore, the delivery:yard ratio – the average number of vessels delivered by active yards – continued to rise steadily throughout this period, from 1.5 in 1998 to 2.1 in 2008. 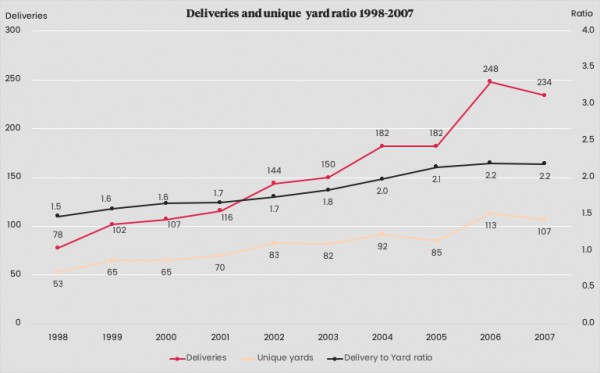 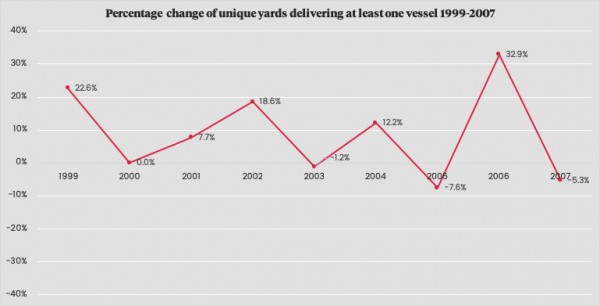 And yet, the decline has not been as formulaic as the growth was during the halcyon days (see Figure 3). In the three years following the financial crash of 2008, delivery figures, active yards and the delivery:yard ratio fell relatively consistently to 181, 97 and 1.9 respectively, bar a small increase in active yards in 2010, with the market reaching its lowest point since 2004. 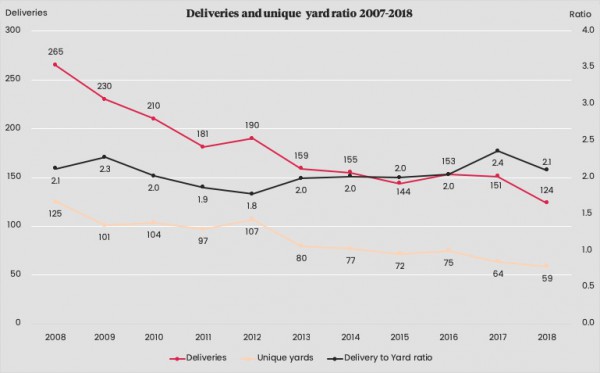 But, in the years that followed, the new build market followed a far less predictable pattern. It is true that both deliveries and the number of active yards have decreased fairly consistently between 2012 and 2018. However, between 2012 and 2018 the delivery:yard ratio rose from 1.8 to 2.1, with a peak of 2.4 in 2017, which is perhaps indicative of a recovery of sorts (see Figure 4). This ‘recovery’ though is more likely a strengthening of the stranglehold that the elite tier of shipyards have on the market. Past Annual Reports and anecdotal evidence have highlighted that the market is within a period of consolidation, and the delivery:yard ratio is increasing lends credence to these claims. 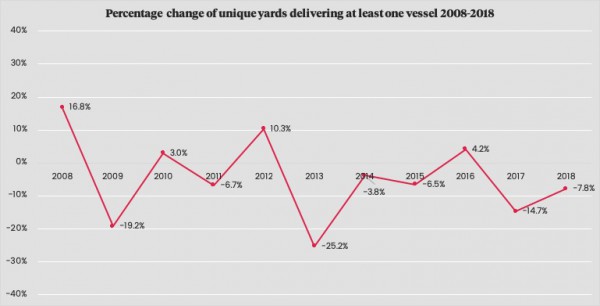 The Superyacht Report: New Build will explore the health of the new build market by deconstructing it into a number of size and geographical sectors, as well as utilising a variety of other metrics that will furnish decision makers with a means of supporting their strategic decisions with empirical data. Click here to receive your copy.

Superyachts are great, but we need to keep it real