Can virtual and augmented reality transform the design process of a superyacht project? 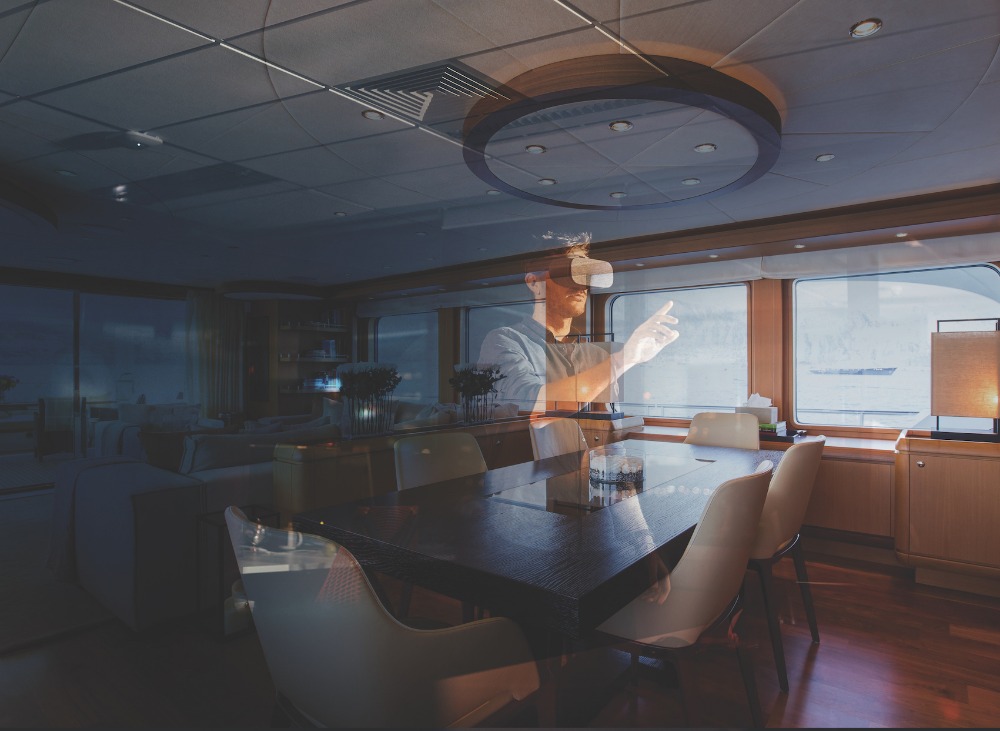 Although the technology behind virtual reality (VR) and augmented reality (AR) is advancing rapidly, the superyacht industry has been slow to adopt it, even though the benefits – particularly of VR for the interior and exterior design phase of any superyacht project – are undeniable. However, a handful of designers and immersive technology companies are now paving the way towards a more engaging design and build experience.

The most important thing to consider when talking about the technology is first to distinguish the difference between AR and VR, and 360-degree VR tours. Many companies in the yachting sector have sold the 360-degree VR experience as AR or VR, which seems to have misled the market on the true potential of AR and VR. Essentially, 360-degree video is what you experience when using many everyday applications such as Google Earth or virtual tours of real estate, which gives the user a panoramic view of a scene from the perspective of the photographer. Because the view is actually a 2D panoramic, the images become distorted and there is no depth or feel to the environment, therefore the image quality is poor and the experience is often frustrating.

Therefore, 360-degree VR tours are quite different from AR, which allows the overlay of the real and digital world, where physical and virtual objects co-exist, and VR, which is a 3D computer-generated immersive media experience that includes use of hand controllers, voice activation or head-mounted displays (commonly headsets). The headset measures head movements and this technology increases the user’s normal field of vision, which results in the immersive sensation with the virtual world.

Benefits of VR during the design phase

VR can be used as a sales tool to transport and immerse a client inside their yacht before it is even built. They can see and experience how the layouts feel in terms of space and volume as they walk around, see the textures of different interior materials and zoom in if they want to see something in more detail. They can change the colour palette of the walls, ceiling or flooring, replicate different types of wood or marble finishing, include fine art and even change the time of day and lighting to see how everything works together. Essentially, clients can walk around and get a feel for a yacht long before they are committed to building the real thing.

Vripack is one design studio at the forefront of such technology; it uses VR to give its clients a clear sense of how their future seagoing home will look and feel, and this not only streamlines the process, it also makes it fun and interactive for the client. Every aspect of a yacht’s layout – from the placement and proportions of the spaces and the relationships between them, to the situation of the stairs, service routes and doors – must fit together coherently and align with its owner’s needs and lifestyle. Vripack’s creative director Bart Bouwhuis says the technology was critical during the development of their recent project Maharani. “We implemented VR as a tool to really imagine the spaces and visualise the connection between those spaces,” he recalls. “We could not have achieved the same interior design and open-plan layout without it.”

Immersive technology company V360 Marine uses bespoke VR and AR applications to assist the design, build, refit and sale stages of a superyacht’s lifecycle. This means utilising custom-built, fully interactive and immersive VR/AR applications as real-time, working environments to help plan projects and analyse options. After taking drawings, floor plans, furniture requirements, mood boards and any other information available, the team will 3D model, light and texture the digital representation of the yacht, allowing design studios, shipyards and their clients to explore the space from any location.

"As a designer, you can create any environment in the blink of an eye by changing the lighting or colour scheme in real time, and this allows you to conceptualise a project for a client and avoid any changes later in the project."

“VR can create a deeper connection with the clients,” explains Sam Slater, CEO of V360 Marine. “It is about giving them the experience without them having to understand naval architecture or interior design. As a designer, you can create any environment in the blink of an eye by changing the lighting or colour scheme in real time, and this allows you to conceptualise a project for a client and avoid any changes later in the project. Often, clients say that they want something and then when they see the finished product they don’t like it. VR gives them an opportunity to visualise their requests properly and pick out things they don’t like before it is too late.”

The use of VR and AR in the superyacht industry is especially interesting because of the bespoke nature of each design. Showing clients a VR walk-through of their project in the very early stages can help to speed up the design process and save money by reducing the number of changes made during the build. By making use of VR, Vripack is in the midst of a six-year mission to reduce the construction time of any new yacht by at least 25 per cent by 2019 and bring back fail cost by 75 per cent.

“After years and years of very low incremental growth, the recent developments in VR are exponential now and allow us to use this tool for our reviews instead of making mock-ups, prototypes and prefabrication, so the cost related to that as well as the time consumption is now fully eliminated,” says Bouwhuis. “After nearly 12 months of R&D we’re at a stage where we’re reviewing complete installation sequences, maintainability, accessibility and so on. We’re basically evaluating the assembly process and the future maintenance of the whole yacht, all before any hour is wasted on building something that could be done better and in less time.”

How has VR technology evolved?

“VR technology has actually been around since the 1970s, but the recent development of the hardware [which has progressed quickly because of massive investments by tech giants] has made it more accessible,” explains Greg Beach, COO at V360 Marine. “Initially, the challenge with the hardware was the expense and also getting the resolution good enough for developers and consumers, but now the advancement and affordability of headsets have made VR accessible to all.”

The most common headsets of choice on today’s market include those made by Oculus and HTC Vive. These headsets make VR so accessible to the superyacht industry because they can be simply sent in a package to a client – without the need for any other equipment – for them to put on and see the project wherever they are in the world.

There really is no limit to how far the technology will go in the future. “The technology is already there to enable two people to be in a virtual-reality space together, so that you could effectively have a designer or broker walking together with a client through the yacht and pointing things out,” adds Beach. “In terms of hardware, we will eventually just be using a contact lens instead of a headset so that you won’t even be able to tell you are wearing the technology – it will just become part of the fabric.”

One of the main challenges to the increasing use of VR in the superyacht industry could be from the brokerage community. “I think this mainly comes from a lack of awareness and the fact that it’s easy to just carry on as normal,” says Slater. “People tend to stick with what they know and wait for someone else to take the jump first, which is understandable from a commercial perspective. But it is important to note that VR is not replacing anything, just complementing what is already in place. It will just take one innovative broker to make use of the technology and the others will realise the huge benefits.”

Some early attempts to use VR technology in the yachting industry failed due to the use of under-developed technology that put the technology before the application.

Another hurdle to overcome is the mis-selling of non-VR solutions as VR. Some early attempts to use VR technology in the yachting industry failed due to the use of under-developed technology that put the technology before the application. VR may seem innovative and forward-thinking, but it needs to add value, otherwise it is just a gimmick. In addition, companies marketing 360-degree VR tours and 3D technology as VR have added to the misunderstanding of what true VR can really bring to the superyacht industry.

Once there has been more evidence of the value that immersive technologies can bring to the table, the latest developments in VR can transform the design and build stages of a superyacht project. For the first time, clients can iron out the elements they don’t like before investing in the build – elements they may otherwise never have thought of when working from a 2D or traditional 3D representation. By keeping clients engaged throughout the process, there will be savings in terms of cost, time and client relations – without the limitations of geography and the unavailability of showcase-ready yachts.