A milestone in the history of marine propulsion? 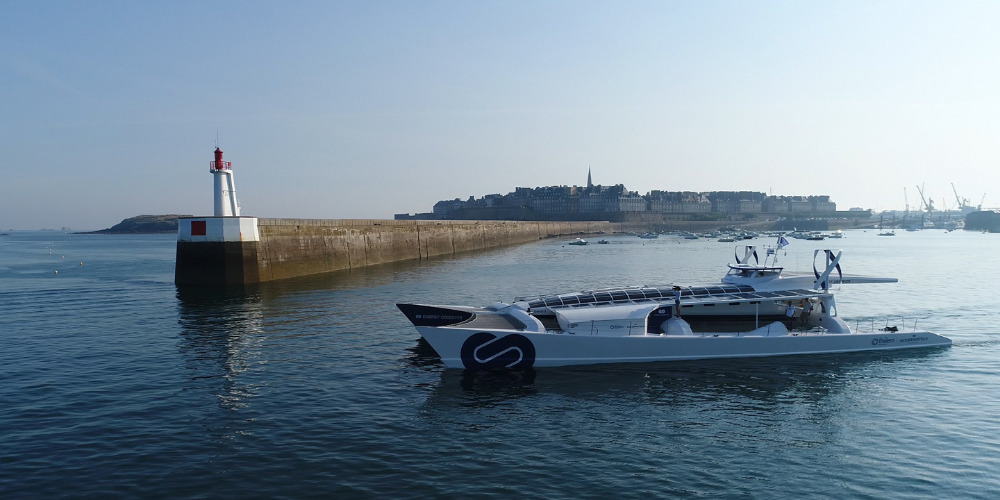 The Energy Observer is the world’s first hydrogen boat, a 32m catamaran with a smart grid, utilising a combination of solar, hydrogen and fuel cell technology for propulsion and all of her on board power requirements.

A global cruising experimental laboratory, The Energy Observer is designed and operated with the goal of total zero-emission energy autonomy, and is now showcasing a great feat for our industry’s journey towards a sustainable future.

At The Superyacht Design Forum 2019, Ivo Veldhuis, technical manager at Mayfair Marine, introduced hydrogen as “the latest development in the maritime world” and hosted a session to inform delegates about what will happen if yachts change from marine diesel oil to hydrogen.

Having spent roughly 20 years researching hydrogen in the maritime sector, and completing his PhD on the topic at the University of Southampton, Veldhuis has noticed a spike of interest in hydrogen in the last two years, from owners who are keen on the environment and the ocean, to designers and engineering offices.

Drawing upon the IMO’s greenhouse gas strategy (to reduce greenhouse gas emissions by 50% compared to 2008, by 2050), Veldhuis noted the intermediate targets prior to 2050, which are as near as 10 years from now. In 2026, the West Norwegian Fjords, a well-known UNESCO heritage site often visited by cruise ships, “will become the first zero-emission control zone in the world” Veldhuis explained.

While The Energy Observer would be permitted to visit sites such as this, post-2026, these restrictions and regulations will have a direct effect on the superyacht industry as they are likely to be applied to other spectacular parts of the world that are visited by boat, which arguably highlights the necessity for an eventual wholesale transition to more eco-friendly fuel sources.

The Energy Observer project draws attention to fuel alternatives that Veldhuis argues our industry should be considering, due to the fact that, according to METSTRADE.com, “maritime transport reportedly emits around 940 million tonnes of CO2 annually and is responsible for about 2.5 percent of global greenhouse gas (GHG) emissions.”

The Energy Observer was “built in Canada in 1983 as a maxi-catamaran”, and had an outstanding racing career behind her… Originally 24.38 metres long, she has since been lengthened four times, and is now 30.5 metres long and 12.80 metres wide”, reported METSTRADE.

She is the first vessel utilising hydrogen power to travel around the world, emitting no greenhouse gases, fine particles or noise. Currently on a six-year, 50-country and 101-stopover world tour, she was recently moored in the harbour of Amsterdam. Project Director, Luis Noel Vivies, who played a key role with the French challenger in the 35th America’s Cup, provided a thorough tour of the vessel, with Captain Victorien Erussard - the founder of The Energy Observer vessel concept. He and his crew set off from France in 2017, immediately after the COP23 Climate Change agreement was struck. Their departure was blessed by French President Emmanuel Macron, who bestowed the project with the hashtag: #MakeOurPlanetGreatAgain.

During the stopover in Amsterdam, together with The Hydrogen Council, a strategic partnership to advance hydrogen technologies was agreed by a council of a global initiative of CEOs representing energy, transport and financial institutions, discussing the necessity for an accelerated deployment of hydrogen solutions.

In line with the hot topic of sustainability, members of The Hydrogen Council realise the potential for hydrogen to turn our industry away from carbon-fuelled transport, and view The Energy Observer voyage as a step towards making the option of hydrogen more well-known.

Before she departs on the next leg of her journey, where she will be heading north to Scandinavia and Russia, she will have two large wing sails fitted in Amsterdam, which consist of a composite mast 12m high, with two sails of 32m2 - increasing the boat’s energy efficiency, and in suitable conditions will allow her to sail without using her engines,  also using the free rotation of her propellers as a hydro-generator to further produce clean energy.

Nearly all of the horizontal surfaces on the catamaran are covered with solar panels, another way in which the vessel reduces its carbon footprint.

SamBoat ventures into the superyacht market