With 4K displays, 3D graphical elements and a new GUI, Air Wings is an evolution of the I-Bridge system… 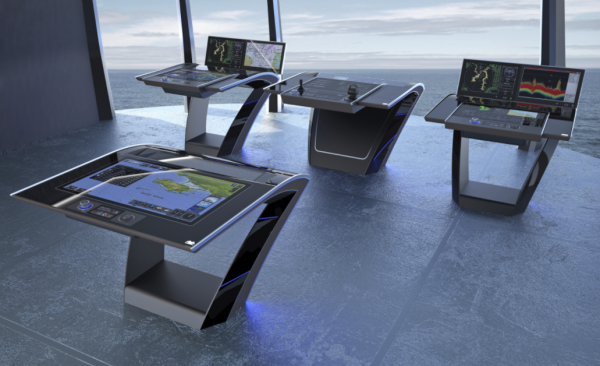 TEAM Italia is using the Monaco Yacht Show to display its new Air Wings system, a new integrated nav-com solution which controls and manages all onboard systems through 3D technology, multi-touch controls and joggers, and a 4K display.

“The most innovative wheelhouse concepts are currently moving towards a clear change in the usability of this part of the yacht,” says Massimo Minnella, CEO of TEAM Italia. “The pilothouse area has become panoramic, and the heavy structures which often used to hold the racks have been removed. By doing so, design has become an increasingly more important feature, creating pleasantly sociable areas which can be enjoyed by both owners and guests.”

The I-Bridge Air Wings features three consoles – port and starboard side consoles that feature the navigation systems, conning display, multi-control touch display and touch joggers and trackballs, and a central console with a stretch 4K display, 4K touch display, and a touch display for JP controls and thrust levers. Also included is the I-Chart table, which is similar to the version shown in 2016 but with the addition of a conning display panel that can be configured according to the operator’s desires.

The ultrawide display on the central console allows for a new type of head-up display. “It’s based on a 180-degree wide panoramic camera, and basically it’s a new way of implementing the head-up transparent display screen we showed last year,” explains Federico Sturlese, CTO of Onyx Automation which is part of the TEAM Italia Group. “This is a more practical version because it requires less space – but it has the same features and you can superimpose whatever function or element you need. It also has a very wide view.”

Configurable display elements, a choice of touch keyboards on demand, new graphics taking advantage of the 4K displays and integration with the new Navis AP5000 autopilot module are just some of the new features shown with Air Wings. Everything can be changed according to the operator’s requirements, and the touch system is slick and convenient for controlling what instrumentation is displayed on which screen.

Moreover, the system includes a document server that allows for schematics and manuals to be pulled up on the console at will, and of course the full alarm and monitoring system is also integrated into the consoles. This also takes advantage of new 3D representations that show where on board an alarm has been activated, and some of these views can also be manipulated through gestures. Further, new graphics showing tanks and piping runs, for example, give a clearer indication of what is happening where. “It even gives you animation for things like fuel transfers,” Sturlese enthuses, “although it’s something that is perhaps more owner-orientated than for engineers. But we happened to have some request from mid-sized yachts that wanted this kind of help so they could better understand what was happening with the piping and the flows and so on.”

Also on display is a new rack unit which features a 32-inch vertical display in the door, designed to take the place of the traditional layout panel found on the bridge. Touch control means the electronically operated breakers can be opened or closed from the screen, while an overview of the yacht’s power system and supply can also be displayed. “You can also switch to the monitoring system application,” Sturlese continues, “replacing the usual physical panel you find in the wheelhouse. The upper part of the display is always fixed, for the bilge pumps and navigation lights etc, but the lower part can be changed and implements access to the full monitoring system.”

“I-Bridge® Air Wings was designed in order to satisfy these requirements,” concludes Daniele Ceccanti, President of TEAM Italia, “and we worked according to the architecture of distributed electronics. This enabled us to free up space by using a lighter design whilst still guaranteeing the very highest levels of safety onboard.”