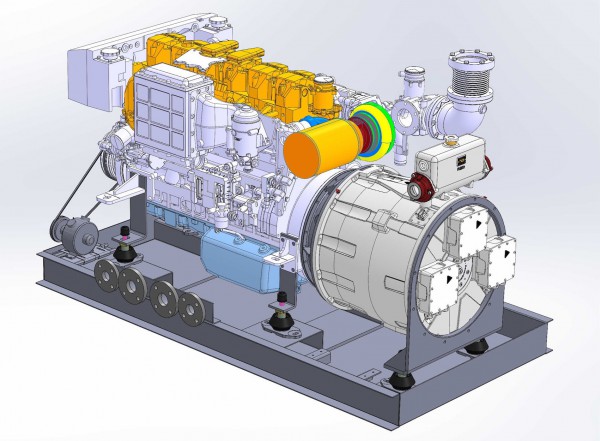 An article looking at pod propulsion technology for superyachts (including ABB’s Azipod, Volvo Penta’s IPS and Reintjes’ Fortjes systems) published in The Superyacht Report last year noted the gap in pod technology suitable for the mid-size superyacht market. While the aforementioned suppliers currently have the over-60m superyacht market and small leisure boat (under-40m) market well catered for, the conclusion of the article highlighted a lack of solutions for the 40-60m size bracket.

Italian shipyard WIDER, however, has been proactively developing diesel-electric pod propulsion systems with DC grid solutions for its mid-size range since 2010, with the technology first featured in 2015 on the WIDER 150 Bartali, and most recently on the WIDER 165  (aka Project Cecilia) currently in build and due to be launched in 2018. Having invested significantly in the research and development of such a system, and now featuring the technology in its entire range, WIDER firmly believes such systems are the future.

“Fundamentally, the diesel-electric system offers numerous advantages over a traditional system which, due to advances in production, is now readily available for yachts starting from 40m in size,” explains Luciano Cardini, head of engineering at WIDER Srl. “WIDER is the first yacht builder to include this system with a DC grid, although others have used it with AC grids and are now following suit. This was based on a thorough consideration of the specific power requirements for yachts in this size range, from very low usage at night time at anchor (around 50kW), through to high usage while cruising at full speed, cooking lunch for guests and crew with the air conditioning on max (around 1200kW)."

"The diesel-electric system offers numerous advantages over a traditional system which, due to advances in production, is now readily available for yachts starting from 40m in size."

Cardini explains that the DC system involves running generators at variable speeds, which allows the system to produce electricity to cater for the specific demands of the yacht at any given moment, no more and no less. This has benefits compared to a standard generator which runs at a fixed RPM, thus producing a fixed output of power and requiring the inclusion of load banks to ensure smooth operation. This is inefficient given that the maximum power is produced irrespective of the specific power demands at the time.

“The DC system ensures a very efficient generator performance, meaning savings in fuel consummation but also benefits in terms of reduced noise and vibration and increased time between overhauls on the machinery, meaning reduced ownership costs,” adds Cardini. “These are all qualities that the modern yacht buyer is seeking – they are readily available in their house, in their choice of cars, now they want them on their yachts.”

Antonio Lupi, director of Asea Nautica, was the lead consultant in the design of WIDER’s propulsion system. Following research and development processes, the team decided to work with Nidec (originally Emerson Industrial Automation) for the power management system, Veth supply the pods and Visedo supply the alternators and motors. Both Veth and Visedo had to work together to create a unit small enough to fit on the 150’ and 165’ projects.

“During the course of the R&D, all of the main suppliers were contacted and options discussed,” explains Lupi. “However, the decision to go with Nidec for the power management system was because of their flexibility to work with us to design a system that worked for the usage we envisaged based on our experience and knowledge of how a yacht of this size is used. At the time, all of the ‘off-the-shelf’ systems were based on an AC grid. An AC grid system is more adapted to usage on larger yachts (over 90m) and cruise ships where the minimum hotel power requirements are significantly higher.”

The use of a DC grid enabled the WIDER team to allow for the variable minimum power requirements more efficiently, which also allowed for other advantages to shine through, such as reduction in noise and vibration, fuel consummation and engine maintenance. Additionally, the DC grid permits for the inclusion of a significant amount of battery power/storage to help run the vessel even more efficiently across the range of power required at different times. As a result, the WIDER range can be powered by batteries alone for up to six hours, depending on state of charge, meaning nights in complete silence or stays at anchorages without the noise and smell from exhaust.

The use of a DC grid enabled the WIDER team to allow for the variable minimum power requirements more efficiently, which also allowed for other advantages to shine through.

Not all diesel-electric vessels have pod propulsion, as some have traditional shaftlne, so having made the decision to focus on diesel electric for the aforementioned reasons, WIDER decided to consider the power train. “Again, the decision to use pods was driven by the advantages these allow, such as increased maneuverability,” Lupi continues. “Furthermore, whereas on traditional yachts the engine room position at midships is determined by shaft line, the flexibility of layout with pods allows us to gain premium ‘real estate’ in the centre of the ship, ideal for guest areas, at the expense of space in the bow which is less suited for guest and crew accommodation.”

Veth was selected based on the quality of its product and its compact design, which includes counter rotating props that aid in reducing noise and vibration, in line with WIDER’s desire to produce yachts with extremely low noise and vibration levels. The worldwide after-sales service support available was also a significant consideration.

Cardini believes that the way the system has been designed lends itself well to yachting. “Essentially because it has been designed specifically for yachts,” he concludes. “We have not simply taken a system designed for another use and tried to adapt it for use on yachts. Yachting is about having fun on the water but that means at times relaxing for days at anchor and at others steaming across the Med. Yachting does not compare to the use of a cruise ship or a commercial vessel, where diesel electric has featured since the early 1900s. However, efficiency and reliability are highly sought after in yachting and we are confident that is precisely what the WIDER system offers: a tailor-made solution specific to yachting that will soon become the norm in the same way that electric cars are in the automotive industry.”

Underwater lights: the challenge of retrofit

The future of smart shipping