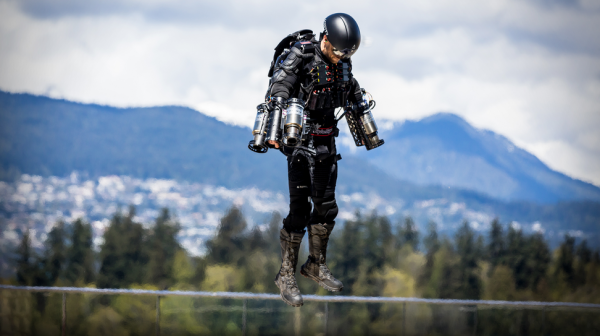 Richard Browning spent 15 years working at BP and has been involved in several innovative start-ups and tech projects. He is founder of human flight technology start-up Gravity, and is currently refining his rocket-powered bodysuit.

During my 15 years with BP I was fortunate enough to be allowed some freedom when it came to innovation. For example, when I came across AIS [Automatic Identification System] I got the company to spend $30,000 on a Google Maps-type application that essentially allowed us to track world trade flows. Within three months, we had generated $50 million. It sold me personally on the extreme value of spending less time worrying about why you shouldn’t do things, and more time just getting out there and exploring.
Two years ago, I started down the route of human flight, really with no commercial idea in mind. I’ve got a healthy respect for what can be achieved with the human mind and body, and I began to wonder where you could be if, instead of putting a human being in a flight machine, you actually augmented the pretty capable human mind and body, and built the flying machine around them. The result was the personal jet-powered flying suit. I thought it would be a really awesome challenge to see if we could get somewhere with it, and it turns out we got further than we imagined – you can see the rest polluting your social media!

With shareholders to pacify and quarterly figures to deliver, it’s not surprising that big corporations are generally wired to be conservative, and therefore they can be inherently rubbish when it comes to nimble innovation, which is all about having little regard for convention, and failing for the most part while wasting time and money. All these behaviours are appalling to most corporate people and, increasingly, it’s not an option. However, if you want to survive beyond the next decade, you have to make room to entertain the crazies.

"With shareholders to pacify and quarterly figures to deliver, it’s not surprising that big corporations are generally wired to be conservative."

For instance, if you’re a major hotel chain and you start wondering about the future of hotels, you shouldn’t go to some country retreat and just think about it. You make desk space for a bunch of crazy 25-year-olds who have got a mad idea about renting out spare rooms. The very fact that it seems appalling and ridiculous and unrelated to your business is exactly why you should put them in the corner of your office. With the Kindle, for example, by hook or by crook, Amazon ended up owning their own disruption. That’s my biggest concern when it comes to big corporations – they rarely see a threat and then take the opportunity to own it.
My rocket suit has already grown out of all proportion. We raised, by mistake, a whole load of money, and it’s a really well-funded aeronautical innovation business now – I’ve even given up the day job. But having spent 15 years in a big corporation, I am determined not to become one. I’ve hired a PA and an engineering graduate but everyone else – around 25 people – is contracted as a plug-and-play resource as we need it and as it suits the business.

I am sympathetic to the fact that big organisations, and many companies in the superyacht or shipping industries, can’t run around pretending they’re Elon Musk all the time because life doesn’t work like that. But for our flying suit there was no drawing board involved.

Perversely, the more people tell me something can’t be done, the more I get excited because it means there’s a chance that what you do could completely change the rules. The corporate mentality finds this so hard to get its head around – but it doesn’t have to be rocket science!

This guest column originally appeared in The Superyacht Report.

Richard Browning presented at The Superyacht Forum in 2017. For more information on the 2018 event, click here.