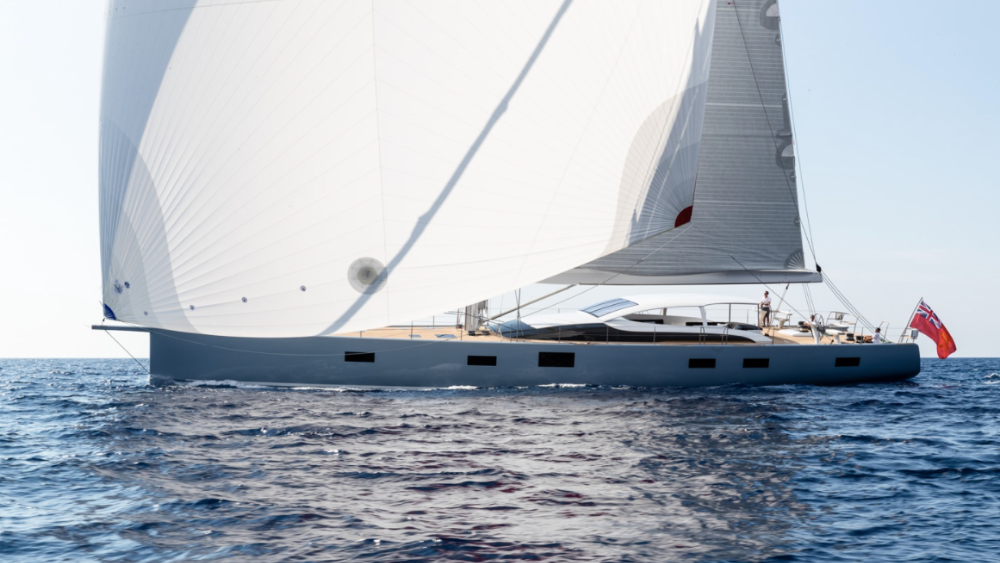 The reliability and running costs of the diesel engine have historically made it the power source of choice aboard yachts, not only for propulsion but also for driving charging systems. They were fitted exclusively to Baltic’s numerous series production yachts and, even today, with other options available, it is taken for granted that a yacht will be fitted with a diesel internal combustion engine.

Despite enormous improvements in diesel engine power-to-weight ratios and reductions in emissions, the fact that they run on fossil fuel puts them at a disadvantage. The growing call to clean up and protect our environment and the acceleration of alternative power source technology will completely change how yachts are powered. Charging systems using more efficient batteries, solar power, electric propulsion, hydrogeneration and now fuel cell technology will all be part of the revolution.

Fitted with an electric propulsion motor and employing hydrogeneration to charge its battery bank, the Baltic 68 Café Racer, currently in build, will be the first yacht we have built without a conventional fossil-fuel-burning generator, although a small amount of gasoline vapour will be needed to fuel a micro-turbine designed to charge the on-board batteries and act as a range extender (REX). Micro-turbines are a fraction of the size and weight of diesels and have just one moving part, dramatically reducing maintenance costs. The technology requires a heat source to drive the turbine which, in turn, drives a generator, the fuel for which could be hydrogen, although, as described later in this article, storage is still an issue. The boat still relies on relatively large, heavy banks of Lithium-ion batteries.

So, how do we reduce the use of fossil fuels and find even more efficient ways of storing electricity? One solution could lie in the fuel cell used as a generator in conjunction with 3D-printed supercapacitors for storing electricity.

Fuel cells convert, typically, hydrogen and oxygen to generate electricity with the only by-products or emissions being water and heat. In the wider marine market, tests have been ongoing for the last 20 years, and there are larger motor vessels with fuel cell technology, but it’s been mainly one-off projects. It’s harder to fit on smaller yachts because of the space it requires. The 114kW hydrogen fuel cell currently being used in the Toyota Mirai electric car is the ideal size for 30-40m yachts and is being examined by the Baltic R&D team. On weight alone it’s a winner, tipping the scales at just 150kg as opposed to 1,400kg for a 100kW diesel equivalent.

The big drawback of fuel cell technology for yachts is the lack of infrastructure needed to store and supply hydrogen. Carrying it in liquid form requires too much energy to cool it to -253°C and, in gas form, it has to be stored under pressure which is potentially dangerous because it is explosive. Inevitable leaks in the system would be a concern and accessing hydrogen in ports is also a major issue. Baltic is looking at ways of making hydrogen on board, but of course you may need diesel as fuel for the reformer, so finding a solution is definitely a work in progress.

Supercapacitors are also exciting. Using electrostatics rather than chemistry to store electricity, the advantages include almost instant charging and discharging. The latter could be particularly useful when, for instance, a large amount of electrical power is needed to drive a hydraulic pump during a sailing manoeuvre. Supercapacitors also don’t use materials like lithium – lithium batteries are very flammable, whereas supercapacitors are not. The materials supercapacitors are made of are also more environmentally friendly. Additionally, the ability to 3D print supercapacitors would reduce manufacturing costs and tolerances, making them extremely compact.

When supercapacitors are developed to a stage where they are lighter, smaller and cheaper than a normal lithium battery today, all the other challenges are minor and can be overcome with technology available today. Also, the self-discharge rate should not be higher than a modern lithium battery. The ideal supercapacitor is also completely non-organic, environmentally friendly and recyclable. They should also be safer than lithium batteries.

At Baltic we are always trying to ‘future proof’ our yachts as technology is constantly changing and evolving. Our dream is to have a combination of fuel cells and supercapacitors aboard yachts, which would eliminate emissions, reduce weight, save space and be cheaper. It’s an exciting prospect, which Baltic Yachts is working on.