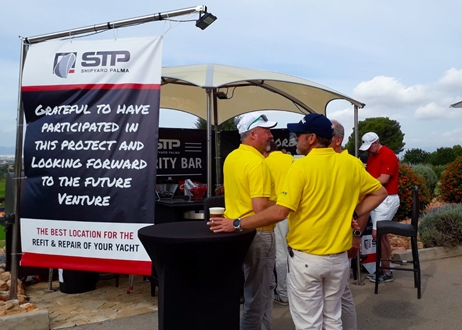 STP Shipyard Palma has wanted to say a fond farewell to the Pinmar Golf Tournament, the most important golf tournament for boat skippers in the sector, in a very special way. This trophy marks the end of an era: 31 successful years during which STP has been a constant presence, performing different roles. In this last edition it has wanted to play a prominent part, supporting the final charity fund raising event in the best way possible.

This year, STP has been charged with managing the Son Gual Charity Beer Bar, with which it has succeeded in raising a total of almost €4,000 which will be allocated to various NGOs and associations chosen by Pinmar. The shipyard is proud to have been able to form part of a major project geared towards skippers and boating sector companies which, at the same time, has served to raise funds for several important causes, including those with a focus on the environment, social issues and the nautical sector.

STP wanted to give a boost to the STP Charity Bar by including a raffle, whose winner will be revealed during the next Charity Barbecue the shipyard organises. The Charity Beer Bar was one of the favourite haunts of players, where they were able to chat about their best shots after a round.

The STP Golf Team have also been present this last year, demonstrating their skills and sportsmanship, but, above all, their good humour and willingness to contribute their small grain of sand to this charity project.

As is now customary, STP played host to the Captain’s Briefing, welcoming participants to the Dock Bar on their own waterfront and the Son Gual Golf Course, to sign up and receive game instructions. Upon enrolling, everyone received a goodie bag which included special STP balls and other gifts.

STP wishes to congratulate the organisers for the history and trajectory of this prestigious trophy, and to all participants who each year have come to the island. It would also like to congratulate the winners of this tournament and especially those who received the prize presented by STP, awarded by its CEO José María Campuzano, for the Best Non Yacht Gross, which was for Marine Cleaning Services.

The fact that Pinmar Golf Tournament is closing its doors after 31 years is not really an adios, but rather an hasta luego, as Pinmar is already thinking about what surprises to spring on everyone next year, and STP will be there to support them with their ideas. We’re eager to find out what will be the next event, which will, without a shadow of a doubt, be as outstanding as this one that has just come to an end.