How WASSP is reducing the environmental damage caused by ghost gear

Ghost gear, as lost and abandoned fishing equipment is known, is not just an economic loss; it’s a large, growing and potentially long-enduring environmental problem. It has been estimated that some 640,000 tonnes of ghost gear, including nets, pots… 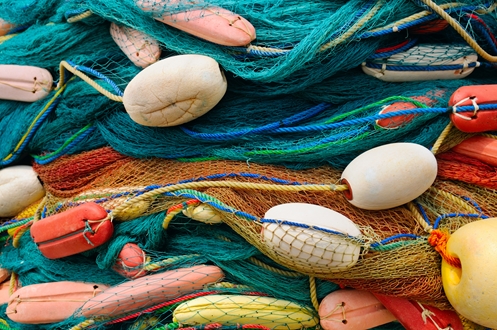 Ghost gear, as lost and abandoned fishing equipment is known, is not just an economic loss; it’s a large, growing and potentially long-enduring environmental problem.

It has been estimated that some 640,000 tonnes of ghost gear, including nets, pots, ropes and more besides, is left in the seas and oceans every year having become so inextricably snagged on a reef or a wreck that the skipper has had no choice but to cut it free for the safety of vessel and crew. Some of this equipment may take up to 600 years to break down and whilst it’s doing that, it continues to entangle marine animals that starve, die and then attract scavengers which themselves get caught in that same net, and the cycle continues. And it’s important to remember that some of these nets are the same size as, if not larger than, football fields.

First brought to global attention back in 1985 by the Committee on Fisheries of the United Nations’ Food and Agriculture Organization, ghost fishing is one of the greatest killers of the oceans’ already depleting fish stocks. Moreover, it’s not just fish that are affected. In the course of their work, many marine organisations have encountered seabirds, seals, turtles, whales, dolphins and porpoises that have all become entangled in abandoned fishing equipment.

Other NGOs, including Global Ghost Gear Initiative (GGGI), have also taken up the cause of addressing the issue along with governments, academia, the commercial fishing industry and other interested parties within the private sector. For example, a number of leading USA, UK and European supermarkets have joined GGGI, some of which are encouraging their suppliers to follow best practice in respect of how they manage their fishing gear, including the reporting of lost or abandoned equipment.

Not only does WASSP welcome and support these initiatives, the company believes that its technology can make a very real contribution to solving the problem.

The F3 series of WASSP multibeam sonar systems, representing the third generation of the WASSP evolution, has been designed specifically to meet the needs of commercial fishing industry. The F3i, for example, features a 160kHz transducer packaged with a GPS compass and a motion sensor, and when matched with WASSP’s newly designed all-in-one digital DRX processor and easy-to-use CDX interface, it has the unique ability to measure depth and position over a very wide vertical area of any fishing vessel’s starboard, centre and port.

At a depth of 10 metres, the seafloor can be mapped at a width of over 30 metres with one single track, increasing to more than 120 metres at a depth of 40 metres. This is achieved using 224 beams, or measuring points, at a sector angle of upto 120°. In comparison, a standard echosounder only has one beam that usually operates at an angle of around 10°and can only measure the depth directly below the vessel.

One of the many advantages of being able to build up such a highly detailed 3D map of the sea floor, as many WASSP customers have testified, is that it enables fishing vessels to significantly reduce the chance of snagging nets.

In the words of the skipper of the Romina Segundo, a purse seiner based out of the Spanish port of Portosin: “I’m really impressed with the WASSP F3i’s bathymetric functions and, as far as I’m concerned, the system has already paid for itself. Early on, I was able to chart a rock which could have caused a lot of damage if it had fouled the nets. It took me just 20 minutes to fully identify it.”

Significant advances by WASSP engineers have ensured that the latest F3 model, the recently released F3X, can produce highly detailed mapping at a depth of up to 850 metres – significantly extending the range at which fishing vessels can identify submerged hazards and take the action needed to avoid finding themselves in the position of having no choice but to add to the ghost gear statistics.

Prevention is clearly better than cure. But WASSP can help in the cure too. As the Romina Segundo’s skipper went on to say: “On another occasion, I identified a net that had been dumped at sea. Because it was off to starboard, not directly beneath my vessel, I would never have seen it with a single beam sonar. But the F3i picked it up and, once again, saved me a big repair bill. The WASSP F3i not only saves my time, it saves my fishing gear.” The point is that If abandoned nets can be identified, they can potentially be retrieved.

So, when it comes to fishing gear, WASSP ensures that less is lost and more is found.

In addition, apart from reducing damage to the marine environment, the use of WASSP multibeam sonar systems can deliver other environmental benefits too. The level of detail of both the seafloor and the water column that WASSP can provide means that skippers can identify and subsequently target the most promising fishing grounds for the particular species they want to catch. As a result, they can spend less time steaming and more time fishing, crucially using significantly less fuel per catch.

In some quarters, technology like that developed by WASSP, has been criticised for aiding unsustainable fishing. But criticisms of that nature ignore a number of facts. As WASSP CEO, Gareth Hodson, says: “Firstly, systems like the WASSP F3 series actually support sustainable fishing because they enable fishing vessels and their skippers to target the species they’re after rather than just trawling along catching anything that’s in their way. Secondly, because they can target where they fish, they spend less time steaming around and therefore use less fuel. And finally, because fishing vessels are much less likely to foul their nets and have to cut them free, WASSP multibeam sonar systems can make a major contribution to minimising the environmental damage caused by ghost gear.”