Alvaro Guell from Spain has won this year's model yacht race - an annual event that began more than 40 years ago as a bit of end of term fun - for Southampton Solent University yacht engineering students. This was the first-year BEng (Hons) Yacht and P… 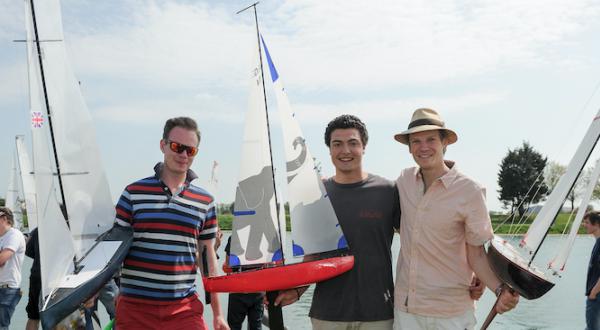 Alvaro Guell from Spain has won this year's model yacht race - an annual event that began more than 40 years ago as a bit of end of term fun - for Southampton Solent University yacht engineering students.

This was the first-year BEng (Hons) Yacht and Powercraft Design student’s first attempt at designing (building and racing) a yacht, as his first love is power vessels. Second place was Marcus Mauleverer, followed closely by Harry Biddle (both representing ‘Team GB’).

Giles Barkley, Programme Group Leader of the yacht engineering courses says, “The sun was out, but the wind direction was a little awkward. Nonetheless, all the yachts sailed up wind very well. There were only a few collisions, resulting in one or two sinking.
Congratulations to all three podium winners, who now go on to join the illustrious hall of yacht design fame.”

This year, 40 first-year student yacht designers competed for the coveted title on warm and sunny Friday 13 May at Gosport Boating Lake, under the scrutiny of their lecturers.

The students spent 100 hours designing and building the vessels to conform to the yacht design rules, with 85% of the unit mark awarded on their computer aided design, and the build quality of their models. They then race them upwind and downwind to pass their design unit. The last 15% of their mark is awarded on how their yacht performs on race day.

"As usual, the standard of design and build of the yachts was high. This year, two students had incorporated wing sales as used on Ben Ainslies Americas Cup challenge yachts. Both sailed well, but just missed out on podium positions,” adds Giles.

With a reputation for leading the world in maritime education and technology, Solent continues to produce graduates who shape the world of sailing, including: Jason Ker, designer of many famous race yachts including Americas cup yachts; and Guillame Verdier, who designed the yachts that came both first and second at 2012 Vendee Globe.

On the sailing-side, world-class alumni include: Helena Lucas, who won Great Britain’s first ever sailing gold at the 2012 Paralympics; Paul Goodison who took gold at the 2008 Olympics; and Herve Piveteau, who sailed to victory in the Production Boat Class at the Mini Transat 2008.

You can watch a short film about the day on Solent’s YouTube channel.

For more information about the yacht engineering courses visit www.solent.ac.uk

FOR FURTHER INFORMATION CONTACT THE MEDIA OFFICE ON 023 8201 3040 OR EMAIL news@solent.ac.uk

With a population of around 12,800 staff and students, Southampton Solent University offers over 200 qualifications ranging from HND to PhD, in subjects as diverse as maritime education and training, fashion and design, media and television, music, health, sport and leisure, business, IT and technology. Every year we are joined by around 10,000 additional students on short professional courses.

Winner of the Times Higher Education ‘Most Improved Student Experience’ Award 2015, the University was also awarded the 2013 Quality Assurance Agency kitemark for quality and standards of teaching and learning, and voted one of the UK’s most creative universities in Which? University‘s 2013 and 2014 student polls. Solent’s business school has been awarded ‘Gold approval’ by the Association of Chartered Certified Accountants (ACCA), and also holds the Small Business Charter Award, which is supported by the Association of Business Schools and the Department for Business, Innovation and Skills.