The two brands are committed to improving their ecological footprint… 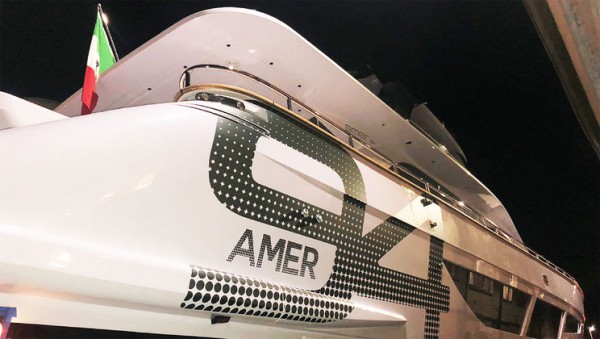 Earlier this month, Volvo Penta and Amer Yachts hosted an event to celebrate both brands’ commitment to sustainability. The event saw representatives discuss the elements of their collaboration, as well as presentations from a local marine biologist Sabina Airoldi from the Tethys Research Institute, and Dee Caffari, world-renowned sailor and skipper for the Turn the Tide on Plastic boat in the 2017–18 Volvo Ocean Race.

The collaboration with Volvo Penta and Amer Yachts is showcased in the Amer 94, the latest vessel from the Italian shipyard. The Volvo Penta Inboard Performance System (IPS) has been designed to be more efficient, and have much lower emissions than other systems. Volvo aspires to “become the world leader in sustainable power solutions” according to Nicola Pomi, vice president of marine sales division for the company. The Amer 94 has been nicknamed ‘the innovation lab’ due to the multiple components and technologies that were used on board for the first time.

Barbara Amerio, the owner of Amer Yachts, highlighted how in addition to the Volvo systems, the Amer 94 also features a number of elements that reduce the weight of the vessel, including using cork decking (rather than teak), lighter pantograph doors and stabiliser fins. According to the Amer team, this weight reduction amounts to 20 tonnes. Other elements of the latest vessel that Amer has incorporated includes materials with a reduced impact to the environment in mind, such as airlite paint that reduces CO2, high-efficiency lithium batteries, reduced plastic usage, eco-friendly submarine film instead of anti-fouling paint and a water system for crew use that reduces waste. The Amer 94 is the fourth model in the series, following on from the 94 model launched in 2015, which was the first in the range to use Volvo’s IPS system.

To illustrate the impact of marine traffic (and thus the importance of eco-conscious technology), marine biologist Airoldi explained that the Pelagos Sanctuary (the largest protected area in the Mediterranean) is home to over thousands of cetaceans, with an estimated 38,00 dolphins and 400 fin whales in the area. The main concern within the sanctuary is the high amount of the maritime traffic that passes through each day; the pollution from the ports and from the vessels themselves is incredibly damaging to the area. Sound is vital for cetaceans to communicate, and the noise pollution caused by yachts and shipping traffic is affecting the marine life in the area. Further, the busy passages mean a significant risk of collisions between yachts and wildlife. “The Mediterranean is one of the most polluted oceans in the world,” commented Airoldi. “We are all responsible.”

“The Mediterranean is one of the most polluted oceans in the world,” commented Airoldi. “We are all responsible.”

In addition to the presentations on the collaboration, the event also hosted a ‘sea clean up’, where attendees spent time collecting plastic and litter from the San Remo marina. The troubling issue of plastic in the sea was discussed in detail by sailor and ocean advocate Dee Caffari. The skipper for the ‘'Turn the Tide on Plastic' vessel in the 2017-18 edition of the Volvo Ocean Race, Caffari spoke of the research her team conducted while sailing across the world. “Our main focus was on single-use plastics, and to get people to change their attitude and behaviour, as we sailed around the world,” she explained. As part of the race, Caffari and her team took water samples from various locations. “[During the race] we go to some very hostile, remote environments, that not a lot of people go to so it makes us a very valuable platform for research and support we can give.”

After finding microplastics in the most remote parts of the ocean, (“Even at Point Nemo, the furthest point in the southern ocean away from any humans, we found them”) Caffari and her team used their platform to educate each country they visited on the impact of their plastic usage.  “It’s a vast subject, but we can make some very simple changes to our lives,” she concluded. “There are seven billion people in the world, so you can understand how a small difference can make a really big change, a small step forward by an industry leader has a huge knock-on effect, and the power of the consumer has never been stronger. We can demand change.”

The role of the superyacht industry in sustainable initiatives will be discussed in great detail at The Superyacht Forum next month. To find out more, click here.