Spotlight on The International SeaKeepers Society

The organisation, committed to ocean conservation, was started by yacht owners… 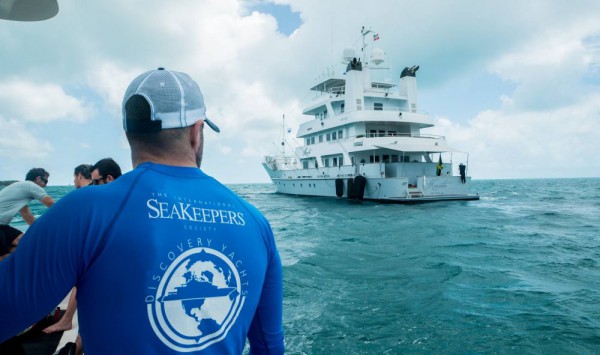 The International SeaKeepers Society was formed in 1998, when a number of yacht owners established a collaborative programme to monitor conditions of the oceans around the world. Growing its areas of expertise over the last two decades, the organisation now hosts researchers, utilises yachts as platforms for marine research and conducts scientific expeditions.

Glen Allen, fleet captain for Fleet Miami and board member of the International Seakeepers Society, recently spoke to SuperyachtNews to outline his role in the organisation, and why he commits his time to helping out with environmental causes. “After almost 31 years on the water, you can imagine what changes I have seen in our environment. Growing up I would sit on the back porch with my grandfather and shuck oysters and eat them out of the shell. I would never dream of doing that today,” he says.

“After almost 31 years on the water, you can imagine what changes I have seen in our environment."

Allen recalls a recent trip to the Galapagos Islands (“It was one of the most spectacular experiences we have had in all of our travels”) where he and his wife were shocked by the plastic pollution that they witnessed. “[There] was the huge problem with plastic. The islands are at the convergence of three major currents, especially the north islands. Each day we would return from land expeditions with pockets full of plastic that we picked up ashore. It made me want to work that much harder to solve the garbage problem but in particular, the plastic problem.”

Allen has been a yacht captain since 1987, but first came in contact with the International Seakeepers Society when his yacht was installed with an instrument that recorded atmospheric readings and water quality via satellite. Then, he was approached to play a more intrinsic role in the organisation. “About four years ago, I was asked to join the ‘Captain's Circle’ to help coordinate discovery yachts with scientists. That lead to me asking the owner of Fleet Miami if we could use his yachts,” he explains. Fleet Miami comprises seven yachts, ranging from 9m (32ft) to 46m (154ft).

The owner of Fleet Miami “readily agreed” to become involved in the programme and the yachts now carry out three or four missions a month. Allen and his wife have undertaken many trips on the vessels for shark tagging and testing underwater drones, including hosting the television show ‘Shark Week’ for the Discovery channel.

The breadth of the missions that Seakeepers is involved with is incredibly varied, and gives the research community opportunities that would never before been available to them. “We took three scientists on a transatlantic crossing to collect plankton samples in areas of the ocean they would not normally have access – due to cost – and it cost us almost nothing for that mission since we were moving the yacht to Europe for charter,” he remarks. “Two of our medium sized yachts took an expedition to the Bahamas to do research on sponges and we currently have one of the yachts at Tiger Beach in Grand Bahama on a shark mission.”

“We took three scientists on a transatlantic crossing to collect plankton samples in areas of the ocean they would not normally have access – due to cost - and it cost us almost nothing for that mission since we were moving the yacht to Europe for charter.”

Allen explains the primary initiative of the organisation, the Discovery Yacht Program, utilises vessels in a number of different ways. “[The program] is a fantastic way for the yachting community to contribute to the scientific studies and observations that are needed for all types of research. The cost is very minor to the owners of the yachts and in most cases no cost at all. I [also] use the opportunity of Seakeepers missions to help with crew training as well, which is a benefit to the yacht.”

Seakeepers understands that often the most limiting factor in oceanographic studies is the sheer cost to scientists of finding a platform to carry out research. By owners ‘donating’ their vessels for short periods of time, they can involve themselves in vital initiatives to save wildlife, understand ocean health and engage with the scientific community. Without a doubt, yacht owners are passionate about the oceans and this is a tangible way to involve themselves in philanthropic causes, in an environment that they know and love.

Further, as Allen illustrates, some of the trips that he has carried out have often incorporated activities that the yacht would already be undertaking or that benefit the vessel in some way. In addition to the positive scientific work that can be carried out during an expedition, this is a compelling way to encourage owners to involve themselves in oceanographic research.