What are the main considerations around having these furry friends on board? 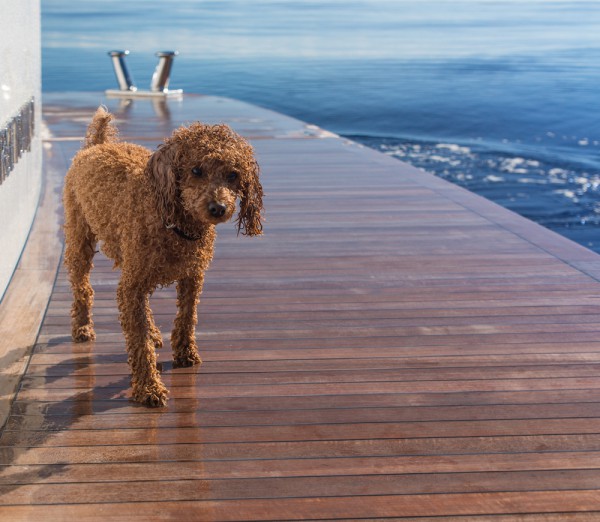 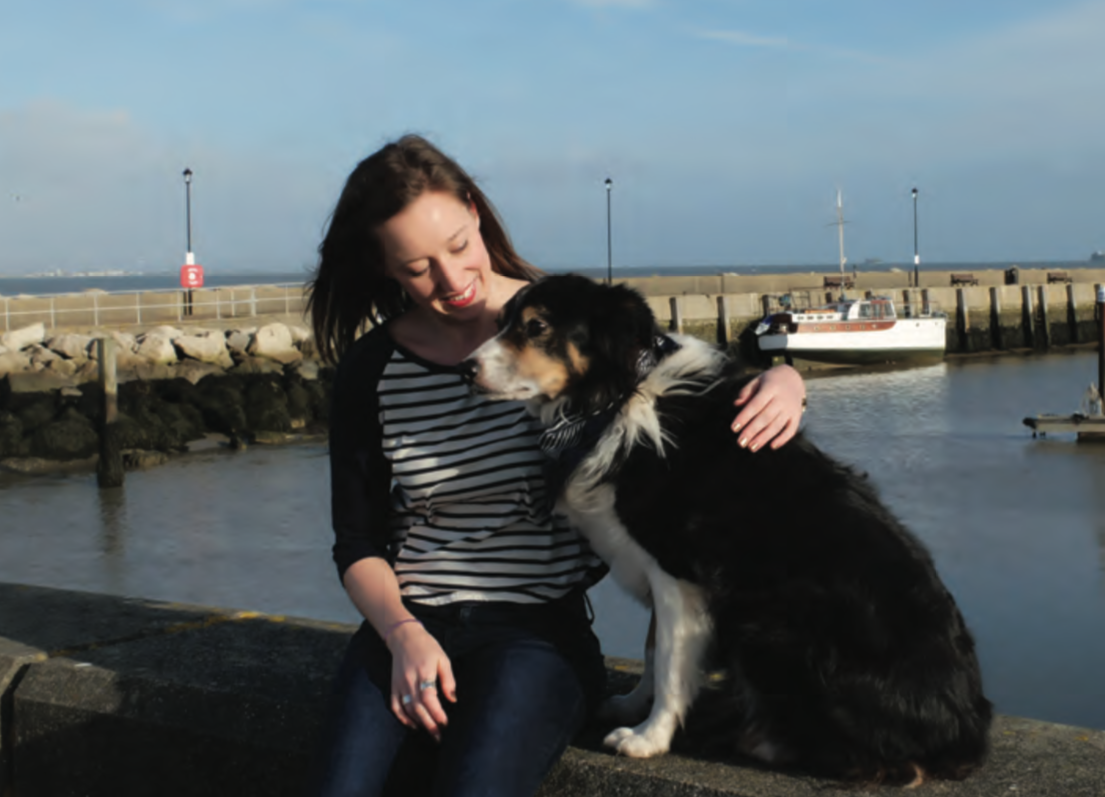 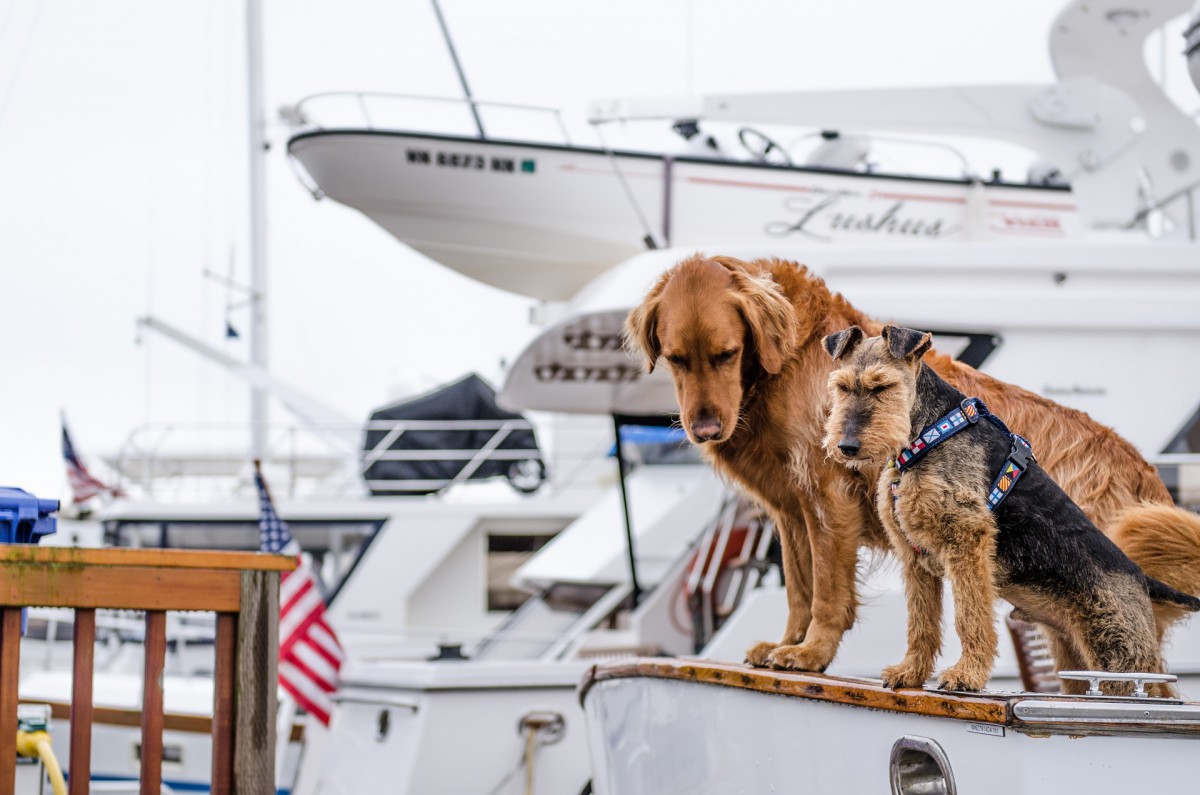 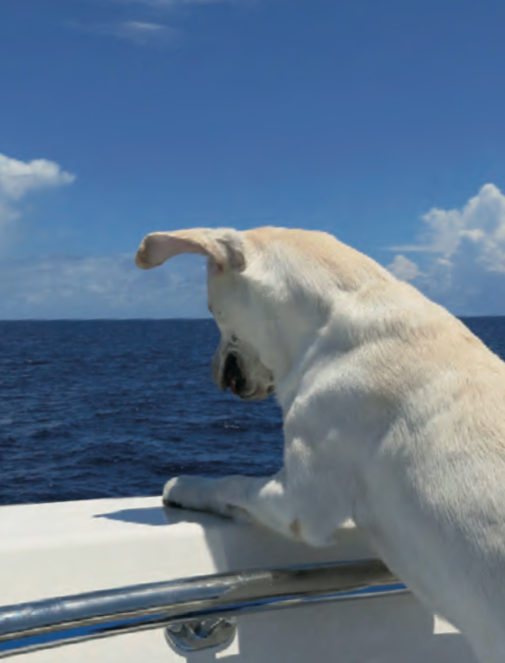 When an owner decides they want to take their dog on board for the season, captains can find themselves inundated with questions ranging from import regulations to medical vaccinations, not to mention interior crew biting their nails thinking about the mess the dog will make to those just-cleaned carpets. But it’s not all bad, and it’s certainly a morale-booster for the crew. With advice from Superyacht Veterinary Service and stories from captains who have done round-the-world trips with canine companions, we take a look at what it’s really like to have pets on board superyachts.

Meet Victor. Victor is a miniature Teddy Bear Poodle, and might just be the luckiest dog in the world. He lives on board Delta Marine’s 66m Invictus and, according to the superyacht’s captain, is the ultimate sea dog. “Victor loves the yacht. He’s a true boat dog,” admits Captain Mauro Barletta. “He’s never been seasick and he actually sleeps better when the boat is moving.”

Victor is one of many dogs that either live on board permanently or spend significant time on board with their owners. Take The Big Blue’s Labrador Retriever Levi and Madame Kate’s eponymously named Bichon Frises Kate and Princess. Having pets – most commonly dogs – on board is a viable option for today’s owners. Yet while it’s the owners who make the decision, it’s the crew, and largely the captains, who are left to consider the logistics.

"Recently, a captain told me how a member of his crew was very ill at sea, and the dog scratched at her door for hours until he was allowed in, then stayed by her side until she was better." - Siobhan Brade, director, Superyacht Veterinary Service

The actual costs of import permits and veterinary inspections are minimal, particularly in the context of superyacht ownership. Where the costs come into play is through mistakes in documentation, highlighting the importance of being confident all paperwork is correct – just take a look at what happened to Johnny Depp.

“The financial penalties for mistakes in a pet’s documentation can be high, and could come either in the form of collateral costs, for example as a result of a change in cruising schedule or route, the use of aircraft to transport an animal out of the country, or costs in the form of fines for breaking import rules,” reveals Brade.

Aside from the legal requirements surrounding taking an animal on board, there are non-mandatory facets that should still be considered. It is worth getting advice on optional treatments and vaccinations that will keep the animal safe from disease and give the owners peace of mind.

Considerations could go so far as the actual design of the superyacht. Amels’ 60m Madame Kate is a good example. The superyacht, with its signage being a clear testament to the value the owners have placed on having their animals on board, has had some slight modifications from the 199 platform we see on Event. Designer Tim Heywood added rails to the lower part of the deck-edge rails and around the stair openings, while the yacht’s sensors have been set not to open the doors when the dogs approach. “Because the dogs are small we need to ensure there isn’t space for them to fall,” explains the yacht’s captain, Daniel Sola, who was with the owners during the build. “We also have to protect the dogs from the technical areas such as in the bow or the places where the crew are working so we have included mini-gates to block off the areas.”

Designer Tim Heywood added rails to the lower part of the deck-edge rails and around the stair openings, while the yacht’s sensors have been set not to open the doors when the dogs approach.

Animal life-jackets should be purchased and a plan should be made for rough weather, while it’s advised crew undertake animal first-aid training and are briefed on plans for pet emergencies. Quite simply, to cover all bases, Brade advises, “It is important to inform owners and crew of potential risks and what can be put in place to prevent them.”

Dogs get seasick: fact or fiction?

Fact. Not all dogs get seasick – Victor, once again, is a case in point of a dog perfectly suited to life at sea, as are Princess and Kate, who spend 120 days of the year on board Madame Kate. But Levi, the four-year- old Labrador Retriever, has, unfortunately, had a different experience. “Levi was part of the family. They just couldn’t leave him behind while they spent a year cruising the Pacific. They thought he would be miserable not being with the family,” explains Captain Gareth Sheppard, the then-captain of The Big Blue. Levi spent approximately six months on board, during which he became arguably one of the most well travelled pets. Levi completed 16,000nm from Florida to Panama, Marquesas Islands, French Polynesia, Samoa and New Zealand, from where he was deported back to the United States due to a complication with his rabies vaccinations not being within the required time frame.

But going back to the United States might not have been the worst result for Levi. “We made several rough crossings, all of which Levi was on board for while the family travelled by plane. Not only did he miss the family, as they had feared, but he could not handle the motion,” explains Captain Sheppard. “He would not eat, he could barely walk as the floors were hardwood and he would slide around, and then there were stairs he needed to negotiate which didn’t always work out too well. Towards the end, he would not go down the interior stairs at all, and when underway and rough, the crew would carry him to his toilet. And, to top it off, it was often difficult to get him ashore at the destination.”

It is for these reasons that Brade offers one crucial piece of advice. “Ultimately, it should be considered whether a dog or cat is suited to life on board,” she says. “The answer is almost always yes, but the welfare of the animal should always come first.”

Of course, the nature of the cruise will come into play, something Captain Sheppard believes is a deciding factor in having an animal on board. “I think dogs are fine on board yachts that are doing short cruises where the pet can come and go with the owners,” he suggests. “But making it a responsibility of the crew to care for the owners’ pet when they are gone is putting more than enough risk of failure on a crew. Having a pet complete long passages where they are barely able to move, cannot run and are away from their owners is not fair on the pet.” It is for this reason the Kate and Princess only set paws on board Madame Kate during appropriate voyages. “We don’t sail with the guests [and dogs] on board when the winds are too bad, so we’ve never had a problem. But because they’re on board for long periods they get used to it,” Captain Sola explains.

But when the animal is happy, the chances are the crew will be happy too. Studies have shown the significant impact animals – dogs in particular – have on a person’s happiness. Research has proved that canine companions lower blood pressure and decompress in high-stress environments – a UK university even introduced a ‘puppy room’ to combat exam anxiety. So, when we consider the additional pressure and stress placed on superyacht crew, in the context of the niche demands of this industry, and providing the owner is happy, having an animal on board actually makes sense.

But when the animal is happy, the chances are the crew will be happy too. Studies have shown the significant impact animals – dogs in particular – have on a person’s happiness. Research has proved that canine companions lower blood pressure and decompress in high-stress environments – a UK university even introduced a ‘puppy room’ to combat exam anxiety.

“Having a dog on board can have a huge impact on crew morale. Of almost all of the boats I know with a dog on board, all the crew absolutely love them as if they’re their own dogs, with arguments, albeit lighthearted, about whose cabin the dog sleeps in at night,” recalls Brade. “Recently, a captain told me how a member of his crew was very ill at sea, and the dog scratched at her door for hours until he was allowed in, then stayed by her side until she was better. The captain said the crewmember couldn’t even describe how much of a difference the dog being there made to her.

It is this effect that Victor has on his crew. “Having a dog on board really does affect the crew in a positive way. The crew just love having him on board,” explains Invictus’s captain, Mauro Barletta. “He brings a calming factor to the yacht and is a neutraliser on a stressful day. He helps the crew relax and feel slightly normal in this crazy life that we live by offering the crew the chance to do something simple such as taking him for a walk.”

Even Levi, who was certainly a challenge for the crew of The Big Blue, made a great impression on his crew. “The crew loved Levi,” recalls Captain Sheppard. “He was an important member of the team who always brought up morale and gave lots of licks when wanted. The girls even loved him after he shed shortly after the cleaning was done.”

A man with a plan

Despite all the benefits for animal lovers of having their pets on board, it is complicated, and this is where the help of dedicated logistics support really plays its part. “It’s about long-term planning of the movement of the animal,” says Captain Andy Smith, who regularly hosts the owner’s small dog on board and uses the support of Superyacht Veterinary Service. “From Brade’s experience as a vet, there are things that can be amended, because rules become outdated and she can push for people to modernise these rules. And if that facilitates more people to modernise their rules, then all the better.”

During Captain Smith’s most recent voyage with the dog on board, every single aspect of the trip was planned 12 months in advance. “It was all to make sure the dog’s paperwork was up-to-date and it could travel. If the dog couldn’t go, we didn’t go,” he recalls.

It’s all about the owner

If an owner wants to travel with his or her pet on board but they don’t take them, due to complications with regulatory paperwork or perhaps simply lack of research, we as an industry are not giving these owners the best experience possible. And for Brade, a true dog lover, this is what it’s all about. “If you can have your pet with you, why would you choose to leave them at home? They bring so many positives with them. They provide a sense of comfort and familiarity that is so often lost with constant travel. Pets can turn something ordinary, such as a walk or a meal, into something unforgettable just by being there, so imagine what they can do for an owner’s overall experience on board a superyacht. Every single activity will be enhanced by the fact that their pet is there with them.”

What do captains look for in an interview?