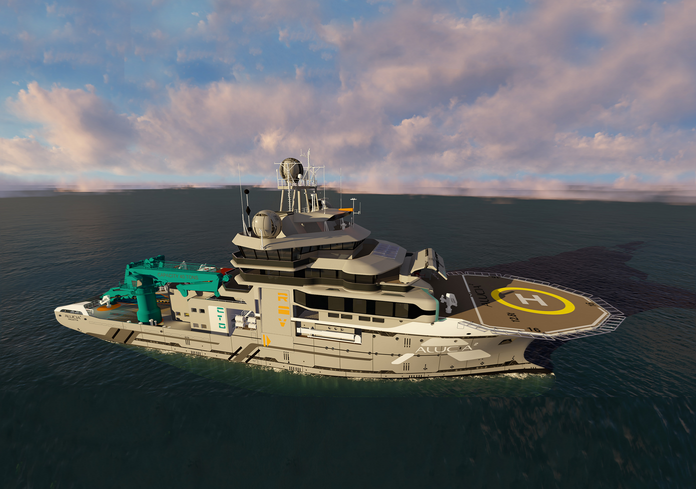 Superyacht owner and philanthropist Ray Dalio, with his son Mark, director James Cameron and a number of other leading scientific partners, announced the launch of OceanX yesterday. This initiative, to further explore the ocean for educational and scientific purposes, will be undertaken by a brand new vessel, 85m M/V Alucia2. The project aims to follow the huge success of ocean exploration carried out by Dalio’s existing research vessel, 56m M/V Alucia.

In a statement about Alucia2 and OceanX, Dalio illustrated his passion for conservation and understanding more about our oceans. "I believe that ocean exploration is more exciting and important than space exploration [and] we are on a mission to show people that." The Prince Albert II of Monaco Foundation is among the many philanthropic partners of the project.

Alucia2 will be delivered in 2019 and was originally built as a deep-sea diving survey vessel in 2010. According to reports, she will be “the most advanced science and media vessel ever built” and her refit has been designed by Gresham Yacht Design. Features of the vessel include marine research labs, media equipments (and an entire media centre), manned and autonomous deep-sea submersibles, as well as a range of helicopters and drones. James Cameron, known for his filmography and ocean exploration, was consulted throughout the development of the media centre. "With OceanX and Alucia2, we will reignite global passion for and curiosity about the ocean in our global, digitally-connected age,” said Cameron. In addition to hosting scientists and media teams, OceanX will conduct virtual classes and museum exhibitions for people across the world.

"With OceanX and Alucia2, we will reignite global passion for and curiosity about the ocean in our global, digitally-connected age.”

Ray Dalio is founder of OceanX and the president of Dalio Philanthropies. His son, Mark, is the founder and creative director of OceanX Media, who worked with the BBC team behind the Blue Planet II series. In a conversation with The Superyacht Report last year, Alex Flemming, co-CEO of marine operations for the family office that operates M/V Alucia, revealed the driving force behind Dalio’s entrance into the yacht market. “He is a very intelligent man and he was always fascinated by the scientific community. He was introduced to Woods Hole Oceanographic Institution and he was so fascinated and taken aback by what they do – and what they achieve – that he had the idea to buy a boat.”

Flemming also echoed the importance of Dalio’s focus on ocean – not space – exploration through engaging media content. “We are trying to make it interesting, and fun, so that it makes difference and people actually say, ‘that’s cool’. Not only promoting the project and the idea, but also make people aware of what is going on. 70 per cent of our planet is ocean, and we only know about 15 per cent of it, how does that make sense? We’re spending more money trying to populate the moon than we are in our ocean backyard.”

The impact of Dalio on the superyacht industry’s attitude to ocean conservation and scientific research is undeniable. Hopefully, his commitment to these causes will inspire more owners to follow his example. And as M/V Alucia has been at the forefront of many exciting ocean discoveries in recent years, we eagerly await the successes of OceanX and M/V Alucia 2.

All images courtesy of OceanX

Fraser commits to cleaning up