SuperyachtNews.com - Owner - Making waves in the world of scientific discovery 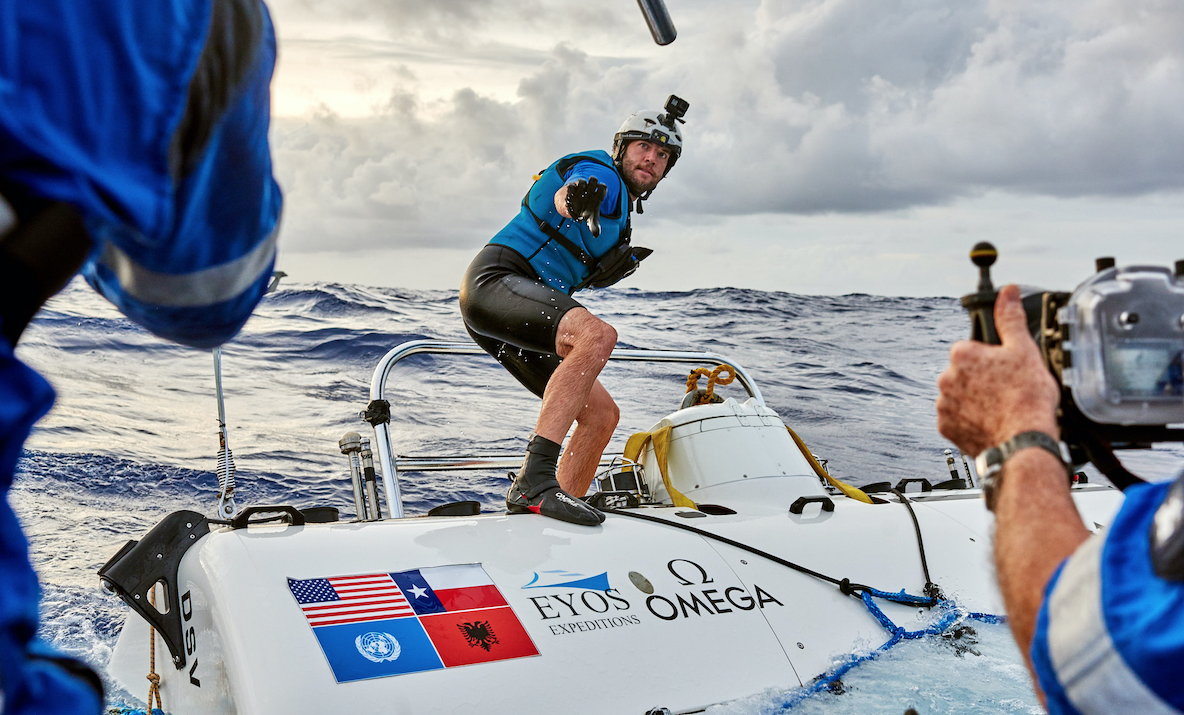 Australian swimmer Tim MacDonald Australia prepares to take the submarine under tow for recovery by the mothership DSSV Pressure Drop at the conclusion of a 12 hour dive into the Challenger Deep.

We sat down with Rob McCallum, founding partner of EYOS Expeditions, to hear more about the Five Deeps Expedition which sees Victor Vescovo, who we have previously spoken to, attempt to reach the deepest point in each of the worlds five oceans and discuss the technical considerations that must be taken into account when attempting these sorts of expeditions. 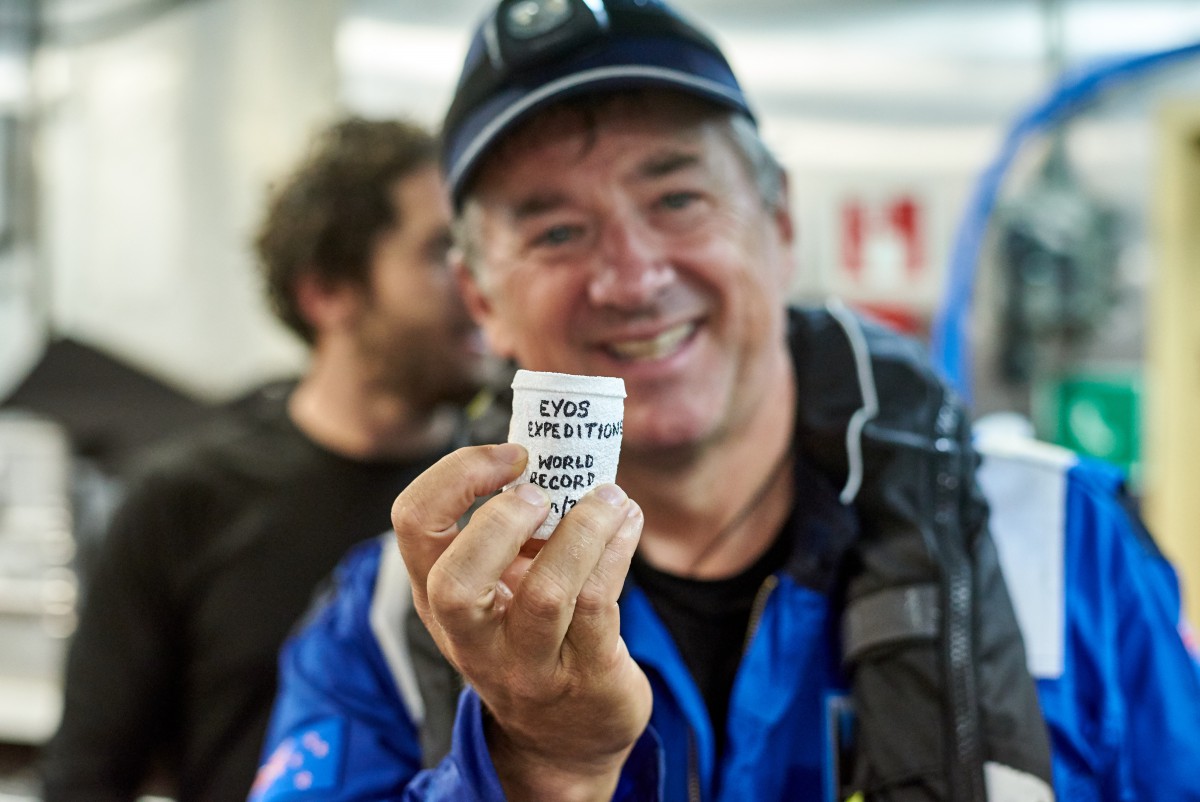 Rob McCallum with some of the findings from the expedition.

SuperyachtNews met with McCallum following the completion of a successful dive to the bottom of the Tonga Trench, the 2nd deepest point on Earth (10,824m). The submersible, DSV Limiting Factor, was built by Triton Submarines and is the only vehicle in the world today that can dive below 7000m. During each dive, the team was able to map the sea floor with their prototype full ocean depth bathymetric sonar (Kongsberg EM-124), which has provided various interested parties with access to information that was previously unavailable. “We are scanning up to 2000sq. miles per day and seeing vast seascapes for the very first time. The sonar allows us to pinpoint the bathymetry of each trench and to identify the very deepest point before we dive.

The Five Deeps team has reportedly discovered several new species on average during each dive. “Most of our dives represent the first time human eyes have seen the landscape and the creatures that inhabit these remote corners of our world….this is pure exploration; a rare opportunity in this modern age”.

“It's a very exciting time,” continues McCallum. “We have made a quantum leap in technology which means this is the first time in history that humans have the ability to go anywhere they want in the ocean.. depth is no longer a limiting factor. We’ve never had that before. Furthermore, the ocean is far more exciting – when you
go to space it's a dead void – at any depth of the ocean there is life. We gathered a small rock from the Challenger Deep, cut it open and we found organic matter living inside it. There is life, inside a rock, at more than 10,000m under water. That is extraordinary”

“Our level of understanding of the ocean up until last month was simply putting bait in front of a camera and and a light, dropping it down at random and seeing what comes up. Imagine if we surveyed the UK like that. The site in question that we’re talking about is also far larger than the UK, the ocean accounts for 71% of the world’s surface.” 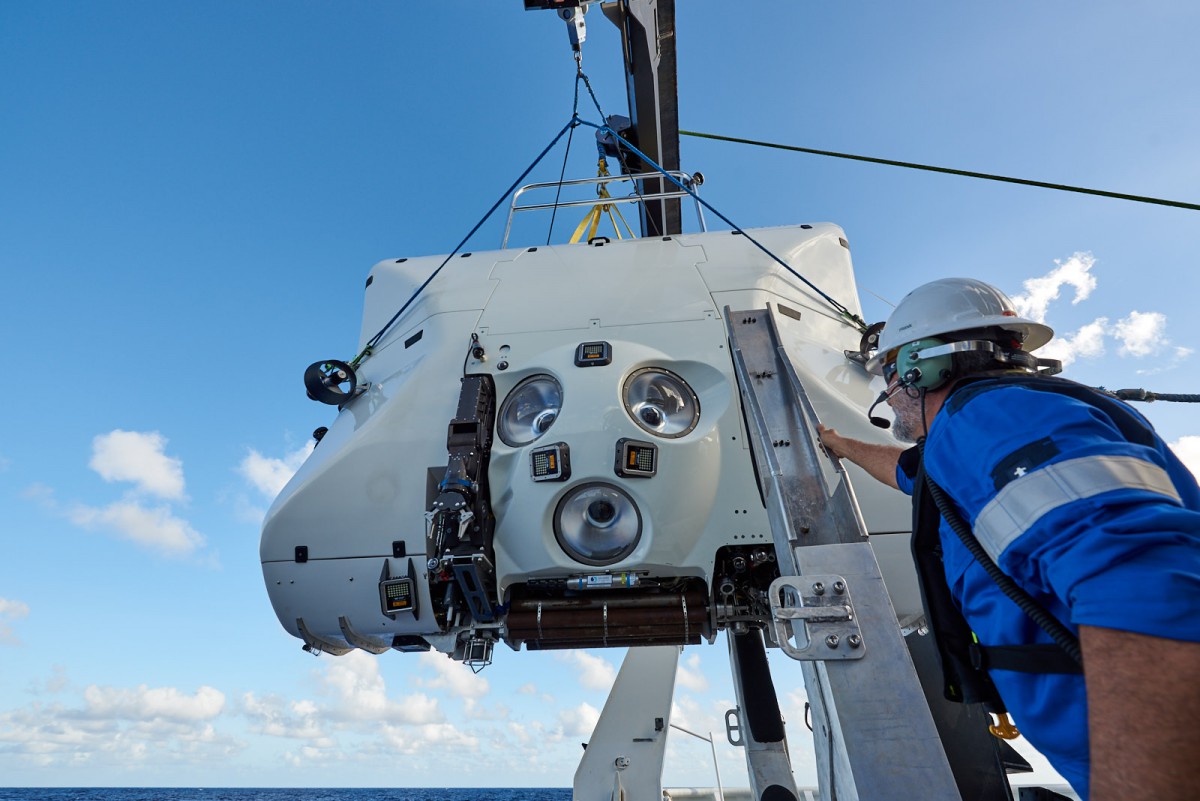 DSV Limiting Factor being launched to dive 10,928m into the Challenger Deep, Mariana Trench. The DNV-GL certified two-occupant vehicle manufactured by Triton Submarines is the only full-ocean-depth vehicle in the world.

In terms of the technical and regulatory considerations, McCallum highlights that, by comparison, the Five Deeps expedition has been right up there with his most challenging expeditions to date.

“As with any ‘world first’, there is no template to follow….so you are always on the learning curve….and this is one of the most complex that I’ve ever had to undertake when planning a journey. At the moment I have been dealing with 57 different government entities – 12 in Indonesia, four in the UK and six in Norway. No one really knows what to do with us,” he explains. “Quite often governments won’t give us permission, but they won’t deny it either. However, they do always want to be informed of the results. The lesson is that if we’re going to be serious about an international approach to understanding operations and an approach from mankind to conduct science we need to make it easy for scientists.

“At the moment it’s nearly impossible and the reason for that is that everyone immediately focuses on resources – what are they here to take? We need to get beyond that. We even have a pirate flag on board which we fly while cruising in a grey zone and it’s to remind us that the world needs a better mechanism for allowing philanthropic science. We’re not a state-owned company, we’re owned by a very well-meaning philanthropically disposed individual.”

It is unfortunate that a well-meaning enterprise is being hampered by preconceptions and fears about the exploitation of natural resources. However, as the scientific community continues to have more exposure in these locations, then, one hopes, the process of engaging in said activity will become far smoother. As the superyacht industry becomes increasingly involved with ocean conservation and scientific endeavour, let us hope that it benefits greatly from the hard work already put in by McCallum, the EYOS team and other pioneers.

Operating submersibles on board

The rise of submersibles