SuperyachtNews.com - Owner - Catamaran tenders: are two hulls better than one?

Catamaran tenders: are two hulls better than one?

Typically seen as workboats, owners are realising the benefits of these capable platforms for guest usage… 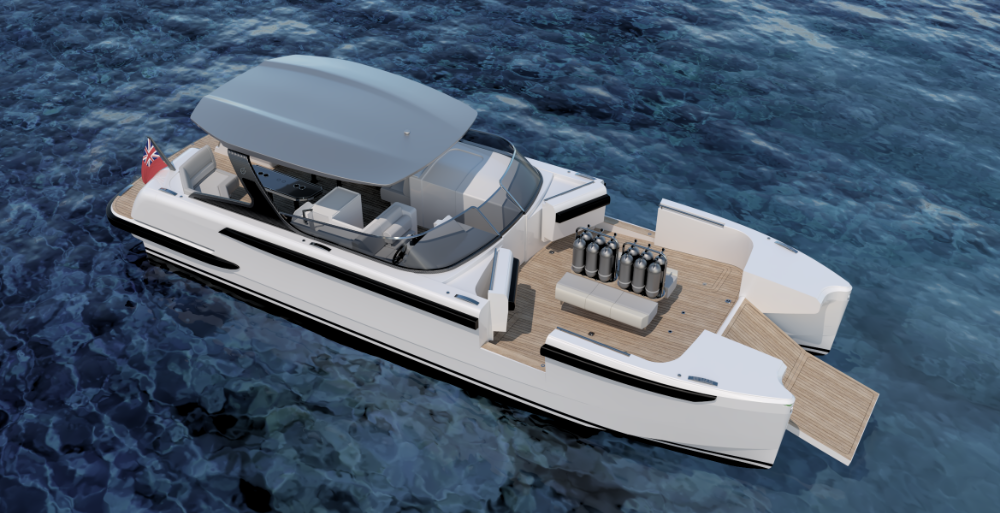 As tender design has evolved to accommodate the changing nature of yachting, the designs of the mothership and the needs of crew, the trend for carrying a dedicated crew tender or workboat is increasing. Catamarans are becoming increasingly popular with the largest superyachts, initially being integrated onto the motherships as crew boats. But, as a type of tender that is normally overlooked by owners for its more stylish monohull counterparts, the catamaran’s specific features hold numerous advantages for guests that deserve more recognition.

Gunnar Vikingur, managing director of Vikal International, believes catamarans are underrated as superyacht tenders. “While they are more complex than monohulls – with two of almost everything there is more to manage – they can deliver a large lightweight platform, needing less horsepower and fuel than a monohull but offering the same amount of useful space,” he explains. “Given the friendly sea conditions that most yachts seek to operate in, a catamaran offers many advantages over conventional hull types, including superior comfort, turning and manoeuvrability because of the big distance achieved between jets or sterndrives. Catamarans are also easy to beach because of the inherent stability with two hulls.”

According to Tom Southern, vice president of Pascoe International, a catamaran tender would be viable on most motoryachts over 70m. “Pascoe’s recently built 10m catamaran tender has a beam of 3.4m, which isn’t much more than a normal 10m monohull tender, so it’s not as if it is double the width,” says Southern. “A catamaran is typically bought as a second or support tender, but it could potentially even be used as the sole tender.” 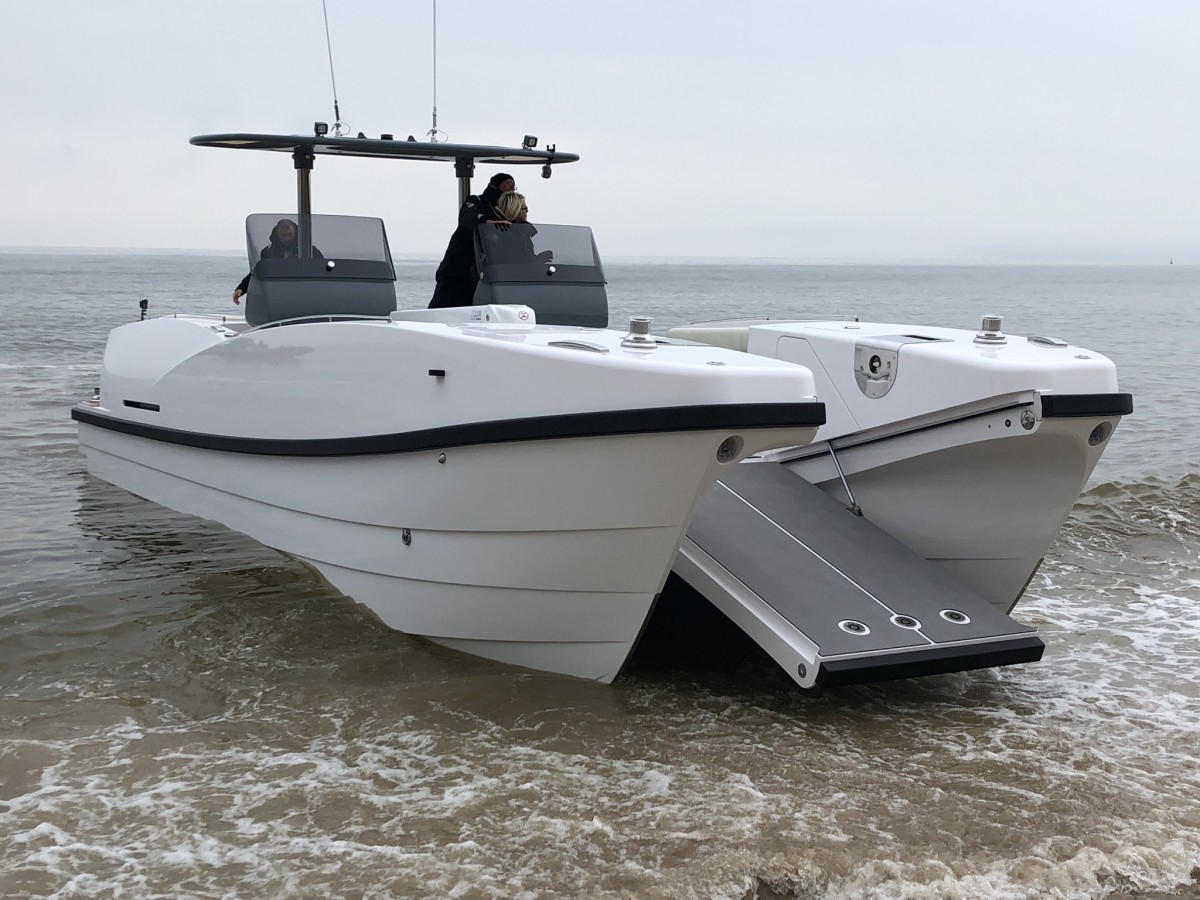 Most owners, however, would not consider a catamaran as a sole tender, due to the connotations it has with a working boat. “Catamarans are typically seen as quite utilitarian, especially at the superyacht tender size – they are normally used as fishing and commercial boats, but are not really associated with the tender world,” continues Southern. “But when you start considering all the things you want to do in a tender, the additional beam of a catamaran makes them the perfect option. We are now seeing more and more enquiries for catamarans, which are being driven predominantly by captains and crew.”

Designed to be workhorses, catamaran tenders are typically used by crew to transport bulky equipment and supplies, store fuel and carry out all sorts of maintenance tasks. But catamarans do have the propensity to evolve into owner and guest tenders. As Richard Faulkner, CEO of Compass Tenders, describes, catamarans are starting to be considered as the ‘high-end Range Rovers of the sea’.

“One of the main draws is the space on board for a given length, with one level to walk around and enjoy,” explains Faulkner. “The comfort is far superior to a monohull of a matching LOA, at any speed but particularly at higher speeds above around 25 knots. Our current 12.8m catamaran project, which is now at the sea-trial stage, is particularly comfortable between 30 and 40 knots compared to a monohull of similar length, not only when traveling in a straight line, but also during turns where it simply doesn’t heel over as a monohull would. It’s no coincidence that the America’s Cup committee and press boats are now wholly or predominantly catamarans.”

The large platform that a catamaran tender offers naturally provides a useful tool for the crew to carry large amounts of supplies and equipment to and from the mothership, but it can also be useful for carrying a large number of guests in comfort, with a superior beach landing function for beach trips and shoreside activities. It is also very suitable for guest diving or fishing trips, and can extend as a base for watersports – a catamaran could be capable of taking up to 20 people on a diving trip, with all the equipment that would entail. Such an outing would generally not be possible on a standard monohull superyacht tender.

“The beam on a catamaran is around 30 per cent greater than the beam of a monohull of the same length,” says Vikingur. “When you add on side decks of the same width to both boat types, the effective work deck remaining on the catamaran will be near double that of the monohull. This is overwhelmingly attractive for a buyer looking for bang for his buck.”

“Catamarans are typically seen as quite utilitarian, especially at the superyacht tender size – they are normally used as fishing and commercial boats, but are not really associated with the tender world...”

Southern agrees this ratio is what is most appealing about catamarans as tenders for owner and guest use. “We had an owner’s team approach us with a list of requirements for an owner’s tender on an 100m-plus project,” he recalls. “When we looked at everything it needed to be able to do and the activities that they wanted covered with the craft, a catamaran made perfect sense.”

The superior comfort of a catamaran is then the characteristic that can make it the preferred tender of owners and guests. “We have a client to whom we have delivered a 12m catamaran and a 12m monohull limousine tender,” adds Vikingur. “In bad weather, he prefers to ride in the catamaran, even though it is open, whereas the limo is enclosed and air-conditioned. In wave height of up to 1.2m, the catamaran offers superior ride quality and safety.”

While many owners might appreciate a catamaran tender once they have been able to use it, there are still negative associations surrounding catamarans that might prevent some owners from considering one as the primary owner tender, the main issue being image. However, this might start to change as tender manufacturers respond to demand with designs that are geared towards guest use, in terms of style and features.

Pascoe’s catamaran, for example, can be configured in any way to suit its function. “The catamaran we recently delivered has two large luxurious sofa units in the cockpit area and all the other features you would expect on a normal guest tender,” says Southern. “Forward of the helm, in what we call the work deck area, there is additional seating that folds away when not required, in addition to a hydraulic crane, working deck space and multi-use racking system that can be used for Seabobs, bicycles and other cargo. It’s like a mini support boat.”

Vikal is currently building a high-specification 12m catamaran tender for a large yacht – the third 12m catamaran of a similar kind built over the last few years. “This 12m cargo catamaran is a large and stable work platform,” explains Vikingur. “The range of equipment is comprehensive and the scope of work expected to be delivered by the vessel is equally impressive. In short, this tender serves the yacht as a people mover, dive platform, re-fueler and cargo supply ferry as well as carrying consumables and refuse to and from shore.”

Vikingur believes that catamarans are gradually gaining appreciation from superyacht owners and, as such, Vikal’s 12m catamarans have now developed to a point where they can be offered as fully enclosed limousine tenders. With styling more in keeping with a traditional limousine tender, a limousine catamaran might help to dispel any concerns owners may have over a catamaran’s association with a work boat.

For owners considering having a catamaran tender on board, Vikingur advises that the main point of purchasing one should be to achieve a large platform. “It is a given that a large garage will be required,” he explains. “On board, catamarans become good value at 10m in length and above – a tender built as a catamaran any smaller does not have the scale to offer the same value, and value refers to more than just the cost in dollars.”

For any owner planning on building a 100m-plus yacht, Vikingur adds that the best value for money would be two catamarans. “One as a large open platform, fast multi-purpose, beach-able and lightweight catamaran,” he concludes. “The other as a large catamaran limousine – the view out for the guests is superior to that of any monohull because of the higher seating positions and incomparably generous amount of space available for the guests. The hulls could share the same hull platforms and be inter-changeable in their respective garages. They could be built and equipped near-identically below decks.”

Faulkner also advises against a catamaran tender under 10m LOA. “Below this length, the package starts to have diminished returns, particularly with regards to ride comfort and performance satisfaction,” he says. “The true LOA ‘sweet spot’ is at around 12.5m – anything much bigger than that then raises issues with handling the tender for launch and recovery, as well as getting inland out of small ports or marinas. The overriding point is that, from our experience and feedback, when a superyacht owner has a number of tenders at their disposal, the catamaran tender fast becomes the favourite.”

As with many designs in the superyacht industry, when choosing a superyacht tender, sometimes form takes priority over function. And it is for this reason that many owners might overlook the functional benefits of having a catamaran tender on board. But, with tender manufacturers recognising the market for catamaran tenders purposed for guest use, more owners could be drawn to the concept with more owner-friendly designs and features.

This is an article originally published in issue 202 of The Superyacht Report. To access the full library, please click here.

One to One: Richard Faulkner