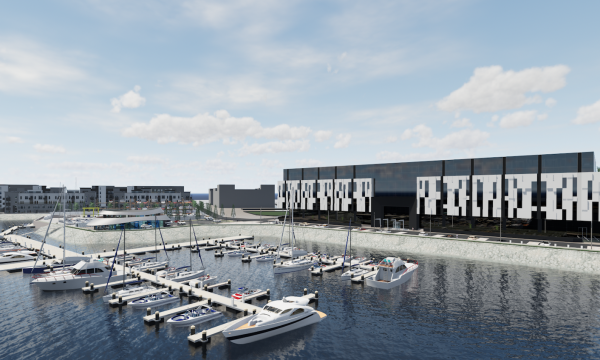 Camper & Nicholsons Marinas has announced its plans to develop a new, state-of-the-art marina in Edinburgh, Scotland. The site will have six berths at 30m+, with linear berths allowing up to 60m.

The new Edinburgh Marina, which will form a core part of a new £500 million waterside development, will be located just a stone’s throw away from the city centre. The marina will be situated next to new luxury residences and hotel facilities. Dan Hughes, chief operating officer for Camper & Nicholsons Marinas, feels that this new development is “probably the most important new and exciting marina development in Europe in the last 25 years.”

According to Camper & Nicholsons, this new project will allow Edinburgh to tap into Scotland’s ever growing marine tourist industry, expected to grow to £3.7 billion. Hughes reveals that the works are to begin in the next six to eight months. “The marine licensing is expected to be granted in summer 2018, with construction commencing thereafter,” he says.

The Edinburgh Marina will feature 315 fully serviced berths providing 24/7 access to the sea, a fully serviced boatyard, dry-stack operation and a state-of-the-art marina office on site. In a statement to the press, Kevin Fawcett, developer of Edinburgh Marina Holdings spoke of the partnership with Camper & Nicholsons Marinas. “I believe that their design and operational management skills and their commitment to customer service will help ensure the successful delivery of this exciting development for Edinburgh and Scotland”.

As outlined in The Superyacht Annual Report: Marinas & Migration last year, the overcrowding found within the Mediterranean has reached almost unreasonable levels; the report detailed that 72 per cent of owners encountered issues related to travelling in the region. This is driving many owners to consider other options for cruising. Furthermore, the growing interest in yachts heading to more extreme climates, Scotland is ideally located for those journeying on to cruise in the Norwegian Fjords or Iceland.

72 per cent of owners encountered issues related to travelling in the Mediterranean... driving many owners to consider other options for cruising

In late 2017, SuperyachtNews reported on the release of a marketing and development initiative entitled ‘The Cool Route’, which hoped to encourage yacht cruising in the areas of Scotland, Ireland, Northern Ireland, the Faroe Islands, and Norway. The Scottish parts of The Cool Route are split into four regions: Argyll and the Islands, the Firth of Clyde, Skye and the North West, and Orkney and Shetland. The development of this marina is not directly related to ‘The Cool Route’ funding, but will be another selling point for visiting vessels.

One of the attractions of venturing to Scotland is the uncrowded, pristine scenery, with superyachts including 78m Amaryllis, 49.5m Exuma and 65m Lady M spotted cruising there in recent years. The improvements in infrastructure and facilities available will undoubtedly contribute to the positive experience owners and their guests have in this destination, and will hopefully see more vessels venturing north of the Med to enjoy all there is to see.