SuperyachtNews.com - Opinion - Should heads of department be cleaning the heads?

Should heads of department be cleaning the heads?

Why doesn't the superyacht industry model itself on other hospitality industries that separates service staff and cleaning staff? 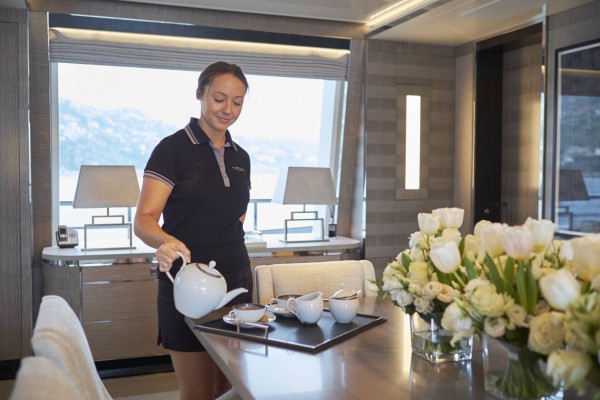 Take a moment and think back to your last flight - if you're reading this, you most likely work in the superyacht industry and most likely you can count the number of days since your last flight on two hands. You're exiting the aircraft, with a tired  but happy steward or stewardess thanking you for traveling with EasyJet, and on the other side of the aircraft door is the cleaning team, ready to relieve the service team after a tiring shift that could have been anything from 45 minutes to 17 hours. That steward/ess and their colleagues will refresh and recharge, and get ready to provide an excellent service on their next flight. And, while all this is going on, the cleaning team is getting their hands dirty, detailing the aircraft.

Just imagine if this is what happened in yachting. Imagine if after a two-week charter, just at that moment where the crew is feeling absolutely exhausted, they don't have the burden of knowing that for the next two days they're detailing every millimetre of the yacht; instead, the cleaning crew comes on board, while the service crew (which could well include the deck team) have a well-deserved break and reenergise for the next charter.

When you think about the fact that this happens in the aviation sector, it's actually quite a surprise that yachting hasn't adopted this same model. In fact, as I was getting the train to work this morning I saw a group of people cleaning the train, under the title 'Train Presentation Team'. If we're asking for career-driven professionals, as opposed to money-driven, month-long jobs, is it fair to ask someone to work towards being the head of an interior department and, after a gruelling two-week charter, still expect that same head of department to clean the heads? In an office would we expect one of the directors to do the photocopying for meetings? No, and not because the latter isn't important; rather because the two are completely different jobs that require a completely different skill set.

It's actually quite a surprise that yachting hasn't adopted this same model.

The manifestation of the fact that this doesn't happen in yachting can be easily seen in quality of service. Someone recently told me they were having lunch with an owner on board, and the crew were at the end of their season. Drinks were being poured shakily, plates weren't being carried smoothly and, if I'm being truly candid, the crew physically looked absolutely exhausted. And these are just the service implications - I don't even want to think about how this might have manifested itself should there have been a fire on board that had to be dealt with by that same crew.

The superyacht industry is very niche and owners are looking to cut costs much of the time - no doubt this is the reason the sort of model described above hasn't yet been adopted. But, when we think about these service models, does yachting's really work in comparison? I won't say I have the answer (yet, anyway), but I do know that working our service teams to the bone isn't helping anyone.