SuperyachtNews.com - Opinion - A for awful?

She's one of the most talked about superyachts in the fleet, but does global recognition really mean that S/Y A is an attractive vessel? 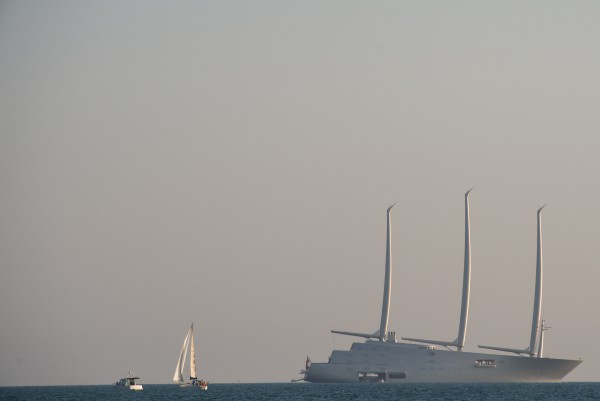 Since S/Y A first entered the public eye, there has barely been a second where the 142.8m superyacht hasn’t made it into headlines. But despite the seemingly relentless stream of media attention, my feelings are that there is a rather large elephant in the room when it comes to the yacht’s appearance. ‘Unique’, ‘breathtaking’ or ‘interesting’ are all words that have been used by various news outlets to describe Nobiskrug’s latest creation in the past year or so, but am I really alone when I say that S/Y A is not an attractive-looking sailing yacht?

From a purely aesthetical perspective, S/Y A, designed by Phillipe Starck, takes the concept of a sailing yacht and turns its back on the fundamental values of yachting - or even being on the ocean at all. Due to the acute levels of privacy on board required, and the sheer size of the enclosed hull, it looks as if a relationship with the ocean could be more easily achieved on land – a villa with a sea view perhaps.

Each and every one of us views sailing-yacht design in a way that is unique and intrinsically subjective, because we have different views on what looks good and what a sailing yacht should offer; ‘beauty’, as they say, ‘is in the eye of the beholder’. And perhaps I’m more of a traditionalist when it comes to sailing-yacht design, but my views are that a vessel should be elegant and well balanced in its proportions, which is perhaps where my – let’s call it ‘lack of understanding’ – of S/Y A’s exterior profile stems from.

The sheer volume of this metallic giant looms over the rest of the fleet in the Mediterranean, often alongside its predecessor, M/Y A, built by Blhom + Voss in 2008, and also designed by Phillipe Starck. But there is something about the motoryacht which is particularly interesting, if not infatuating. And while M/Y A may be unusual, she certainly isn’t ugly.

According to SuperyachtIntellignence.com, S/Y A has a gross tonnage of 12,600gt, which is over two times the gross tonnage of M/Y A, making it the fifth largest superyacht in the fleet. So it’s easy to see why she may look inherently out of place among all but the largest motoryachts. Yet, there is even more to it.

Unlike M/Y A, the lack of exterior lines or stylistic features encourages you to fixate on the yacht’s vast silhouette, whereas other vast superyachts benefit from a segregated hull and superstructure or long, drawn-out panels, which serve to accentuate a yacht’s length, rather than its height, preventing a bulky appearance. Furthermore, the lack of stylistic elements and camouflaged windows means that gaining any kind of perspective of her size is also quite difficult, which makes her proportions appear unusual.

There is no doubt that Nobiskrug, Starck and all those involved have achieved an astonishing creation, having entered into an unprecedented realm of superyacht design and achieving the realisation of the largest sailing yacht ever built. The sheer size of the vessel would have meant for an immensely challenging build – one that the world has never seen. And having succeeding an immensely challenging brief, which is to the owner’s request and far beyond anything that we’ve seen in the superyacht market, the project is certainly an astonishing one but, in my view, is not an attractive one.