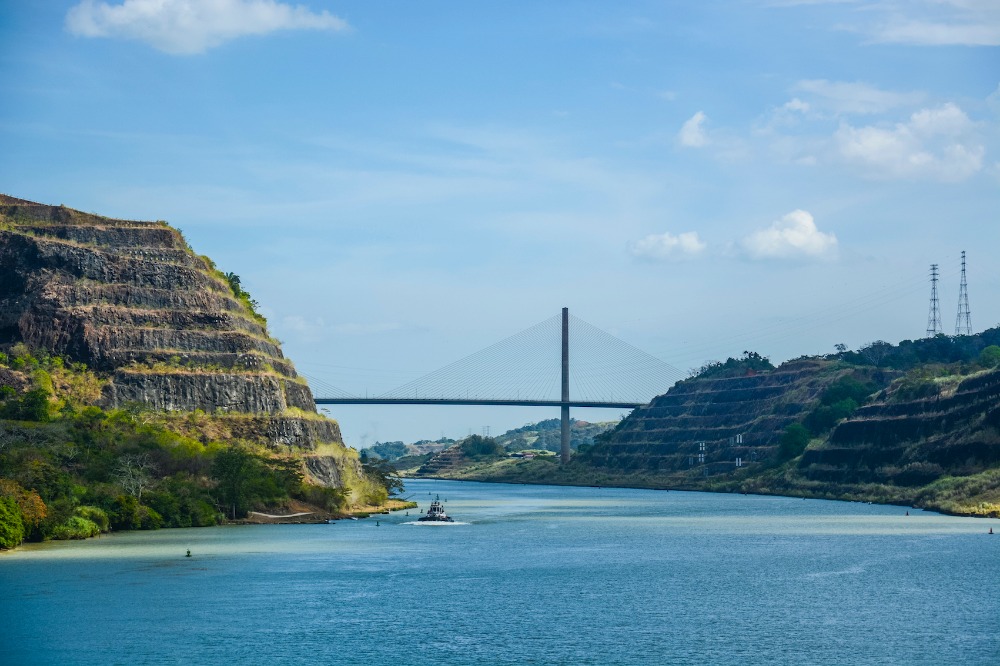 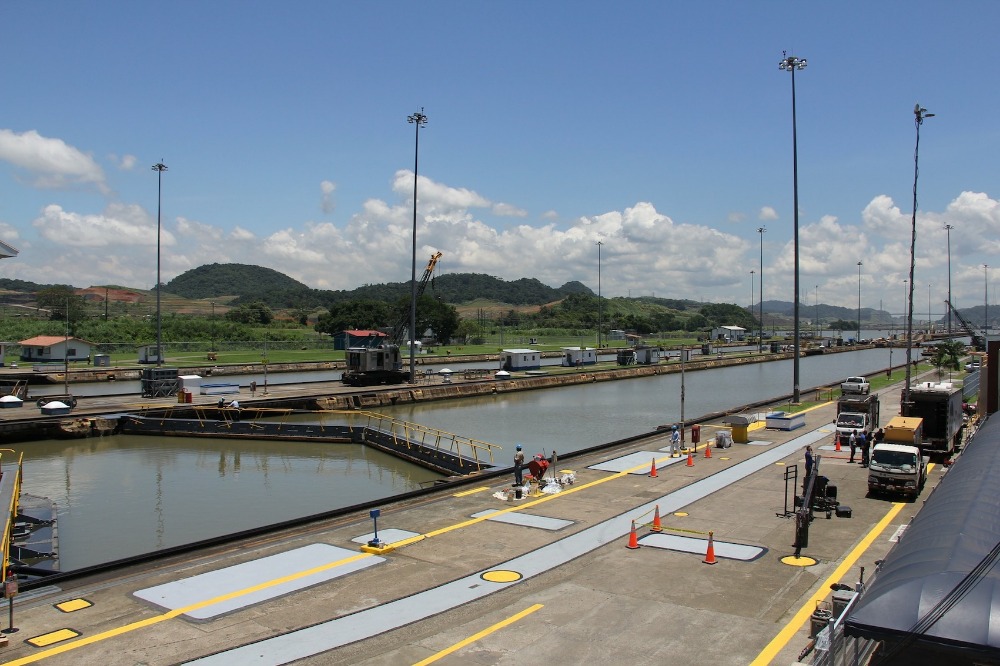 The planning for our east-bound Panama Canal transit began after we were requested to head over to the Caribbean for a Christmas charter, following two months docked within Cabo San Lucas. Being the second transit of Here Comes the Sun’s short lifetime, the required paperwork submitted to our agent was minimal and very straight forward. It included the list below:

Our canal agents for this transit, and all our cruising requirements from Cuba through the canal and up to Baja California, were Pacific Bound Yachts. They made the process incredibly simple and were always on hand to answer any queries and requests we may have had. Pacific Bound Yachts sent us our transit time and plan the day before arrival.

From previous experience, we planned for two teams of four crew rotating four hours each on deck, and the captain and chief officer on the bridge. The reason for these numbers will be explained later.

The morning of the transit we approached Flamenco and are directed by Flamenco Signal Station (Ch12) into the explosives anchorage to take fuel (no pilot is required for this anchorage). Our agents, PBY, had organised bunkering with Stward Oil, a yacht-friendly barge and tug. On dropping the anchor, they came by on their small tender to discuss operations. They then brought the 20m barge over with their 40m tug. This is well protected with ‘yacht standard’ fenders. The process is very efficient and bunkering starts as soon as all checks are done. The barge can supply a flow rate of 400 gallons/minute but we started slow. They also provide drone footage free of charge! 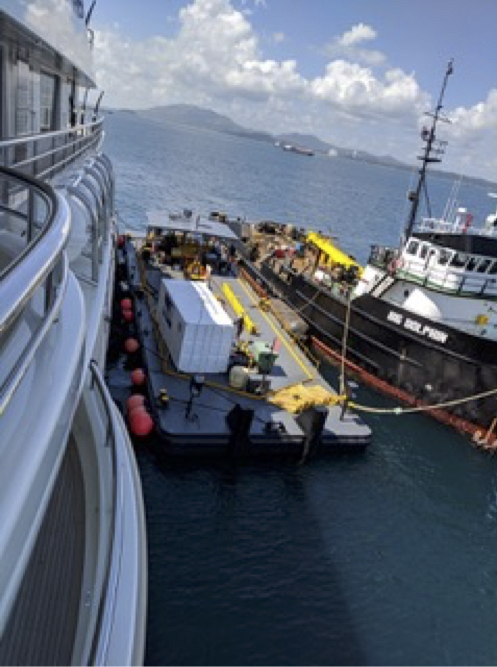 During bunkering we prepared the decks for the transit. Fenders are prepared both sides (as you would when docking side to) and prepare two mooring lines fore and aft, and have a spare line flaked at each mooring station. For yachts, the correct way to prepare lines is called a ‘soft loop’ by the canal authorities. A few turns are put around the cleat with about 10m of line to the eye remaining. Half way along this length we cable tied a heavy-duty chafe guard. The line handlers will put our eye through the loop of the mooring cables and bring the eye back to the yacht’s cleat. This keeps the very ‘commercial’ cable away from the yacht’s stainless steel.

The line handlers use their own heaving lines and like to wrap them around our nicely varnished or stainless-steel capping rails. To avoid this, protection is applied as shown below. Our pilot was also kind enough to give them a stern word not to damage anything!

You can’t have enough drop cloths – protect everything you can. One situated at the pilot boarding gate is a good idea to wipe the handlers’ feet before they put their shoe covers on. We protected the teak with flexi-teak matting down the walkways and blue diamond sheeting on the aft deck. To be honest, compared to a few years ago, they are a lot more considerate so too much protection can be a bit of over kill, and your crew should be supervising all operations anyway. Another tip is to cordon off sections of the vessel that you don’t want people wandering to, like stairwells up to the upper decks.

Here is a deck checklist that we used on the transit;

As well as deck preparations, the interior also prepared the wheelhouse. It is a good idea to have an interior crewmember on duty throughout the passage for any requests the pilots may have. We set up a coffee, tea and water station in the wheelhouse so that they could themselves. We offered a meal at a down time, but they just asked for sandwiches.

We were then ready to begin the transit and the crew took some rest before a long night ahead. Our pilot boarded at 1745, this time with a pilot in training, both of whom were excellent English speakers. After introductions, a good chat and show of mutual respect will work really well in your favour.

After heaving the anchor (leaving both in emergency drop), we headed towards the channel. The pilot boats (or ‘launches’ as they call them) are about 15m long with a 2m freeboard. These are used for both pilots and line handlers. The pilot boat drivers are very skilled and can sit hard on your fenders for as long as they want while they transfer crew. We used two large mooring fenders either side of the ladder. 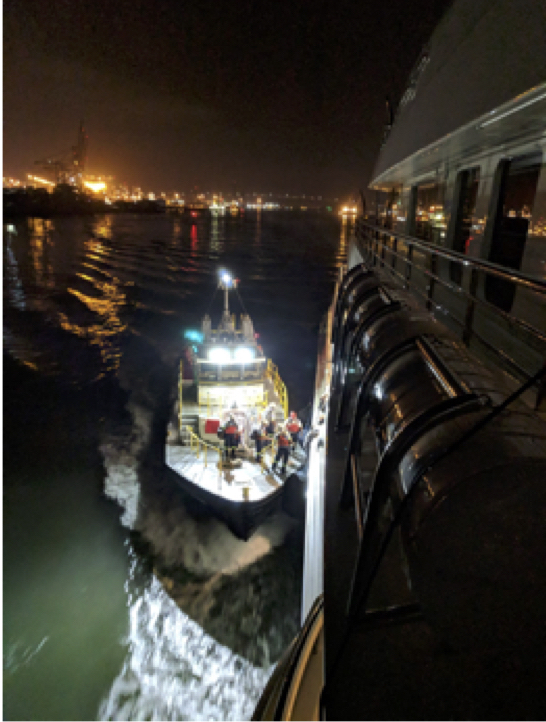 As we passed the first bridge, at 1908 the first group of line handlers embarked – 11 in total. The bosun is escorted to the bridge and hands a radio to the pilot and the crew list to the captain. He is then taken to his station on the foredeck. We positioned two crew fore and two aft so that we could constantly monitor their operations, and escort them to the head when requested.

Just 10 minutes later the first lines were ashore and we received the cable on our starboard bow. The cables were attached to locomotives (or mules) and the yacht ran on its own engines into the lock and within 10 more minutes we were made fast in the middle. Be careful when the shoreside line handlers throw their heaving lines, the monkey’s fists are small but incredibly hard and heavy – there is definitely a hidden bit of lead in there! Get your deckhands to watch though – the way they throw them is a sight – they have targets near the locks where they practice! The mooring lines can come under huge stresses when the water level rises and falls, so your crew should be monitoring at all times.

Each ‘chamber’ of the lock is 1000 feet long so we went in with another vessel. The chamber doors close and water rises. Sea level is 26m below that of Gatun Lake, so between Miraflores lock and Pedro Miguel we must make this up. We figured that this was a perfect opportunity for a drone shot, but unfortunately it is not allowed. We could, however, tell our family and friends to log onto www.pancanal.com and watch us on the webcams in the locks.

This first lock has two chambers, so the cables were slackened, and we moved ahead on engines, with continuous support from the pilot. We were made fast once again, and the process repeated. The doors opened, cables disconnected, and we cleared Miraflores lock at 2026, an hour after entering. Only half an hour later we arrived at the entrance of the Pedro Miguel lock. During this time, the line handlers sat down (they seem to bring their own drop cloths to sit on nowadays) and ferociously make their way through the chocolate bars and cans of Coke.

There is only one chamber here, so after 40 minutes we were free of cables again and made our way into Culebra Cut. Five minutes after leaving the lock, our senior pilot swapped out with another, leaving the trainee on board for the whole transit. Our team of line handlers also disembarked, making sure to fill their pockets with all remaining chocolate and sodas.

We tidied up the decks, restocked, and traversed Culebra Cut, leading into Gatun Lake. This channel and lake exhibit great examples of buoyage and transits/leading lights. You will also catch glimpses of dredgers exhibiting full navigation lights, which is a rare sight on our usual yachting itineraries. This is a good opportunity to get any deck crew in the wheelhouse who want to learn – the pilots welcome it and like to pass on their knowledge.

At midnight we received 11 more line handlers as we approached Gatun Lock. Here, there are three different chambers, lowering us 26m to sea level in stages. We were clear of all cables by 0145 and the line handlers disembarked leaving just the pilots on board for another 20 minutes before we were left to go to our Caribbean destination.

The process will go very smoothly if you prepare correctly. This guide comes from experience and helpful tips from our agents. The behaviour of the line handlers has improved tenfold since the last time I made the transit, only five years ago. They are more experienced working with yachts and have adjusted their procedures accordingly. We also found the pilots to be incredibly helpful, friendly and talkative, making for an enjoyable experience for all parties involved.