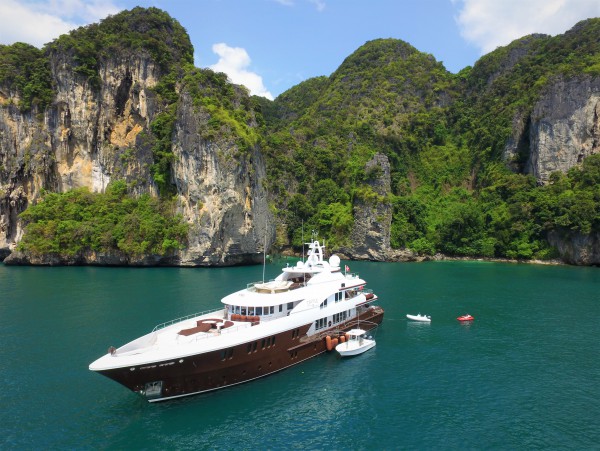 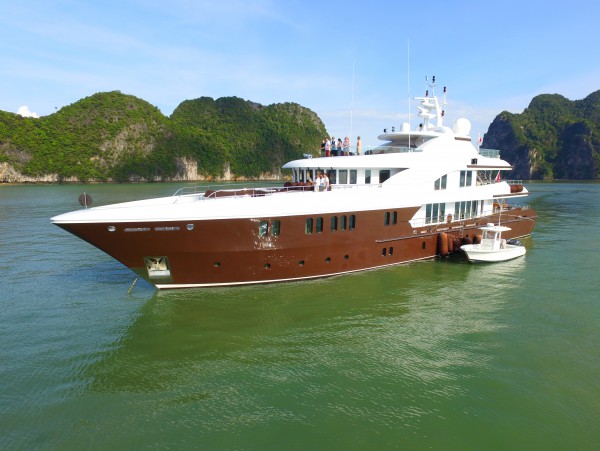 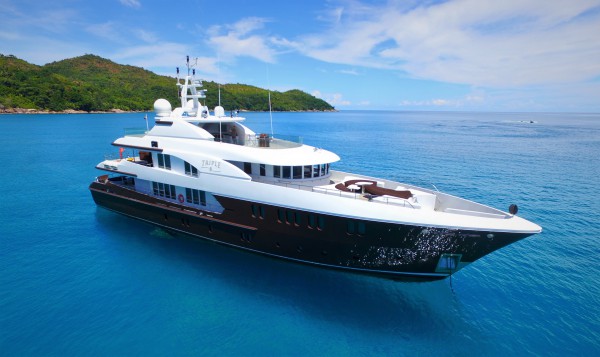 From Thailand to South Africa, 43.4m motoryacht Triple 8, which is currently listed for sale with Burgess, has spent the last few years cruising around all kinds of locations, some well prepared for superyachts and others not quite ready to host a our niche sector. Having kept a detailed log of the yacht’s circumnavigation, Captain Nick Maccrossan shares his experiences of extensive cruising.

In the last year, Triple 8 has visited an extensive list of locations, including Thailand, Maldives, Mozambique, Brazil – the list goes on. But there were a number of locations and passages that tested the diligence of the crew, highlighting the importance of a strong team on board, careful planning, and a full understanding of what one may encounter in these locations. “We recently completed a passage from Thailand to Grenada, which is over 12,000 miles, in three months,” says Maccrossan. This trip was with just the crew, and the yacht only stopped for bunkering, provisions and servicing.

“We did,” the captain continues, “take a little time for crew rest and relaxation in the Seychelles and Cape Town, which made it quite interesting.” Maccrossan explains that Cape Town has excellent facilities for crew. Additionally, the exchange rate (15.3ZAR to the Euro at the time of writing according to XE), means that things are more affordable for the crew. “Cape Town was a welcome break, and for those who had never experienced South Africa, it was an opportunity to see just how developed and tourist-friendly the ‘Mother City’ could be,” explains Maccrossan.

There were, however, some incidences when security was put to the test. On two separate occasions, Triple 8 had incidents concerning the approach of suspicious boats, one off Sri Lanka and one at the top of Madagascar. “It is important to be vigilant and to take early action when such things occur,” advises the captain. Due to the length of the cruising time and the vast expanse covered by the yacht, it was always likely that security threats could arise. Luckily, on these occasions, the incidents bared no immediate risk.

“I was not looking forward to our stop in Brazil, as we were repeatedly told that we would have security concerns on the dock, mainly petty theft,” he continues. However, the yacht ended up spending just one night at anchor before moving on, so any concerns here were alleviated. Logistics in this area, however, were another matter. “ In Brazil, the logistical side of things was really quite painful,” admits Maccrossan, who adds that the discovery of ISS Shipping changed this, describing them as “excellent agents covering every port in Brazil.”

When such an extensive itinerary, Maccrossan stresses that there are a number of essential elements that need to be considered in the planning stages. “You need excellent logistical support. We had good local agents for each bunker stop, who pre-arranged everything and found out about duty-free fuel and approximate costs beforehand, to avoid nasty surprises,” he advises.

“Make sure,” he adds, “you have the support of a dedicated agent to procure spare parts and anything else that may become necessary while underway.”

But perhaps most crucial for this captain is something far bigger than shoreside support. “For such an extensive itinerary, you need to ensure that you have a capable, seaworthy vessel, extensive spares and equipment, and an owner who appreciates that, without these, the trip could turn into a nightmare,” says Maccrossan. His advice to others planning an extensive trip such as this, is that having a fully competent and reliable crew, especially experienced engineers, is an absolute must, so much so that there is no point in even starting a voyage if you can’t rely on the engineering team. Not to mention the bridge team, whom he says must be able to “handle the long hours and occasional poor weather conditions without complaint”, adding, “there is a substantial difference between a North Atlantic hop and a larger ocean passage, so be aware that it can exhaust less experienced crew”. And, just as the yacht needs fuel, so too does the crew. “Have a decent chef,” the captain advises. “It makes all the difference if everyone can eat good food for the duration.”

For an extensive itinerary, there is a vast amount of planning and preparation that needs to take place prior to beginning the journey. But, there is more to it than having a full plan, its about having a fully competent team and a seaworthy vessel thayt can cope with a diverse set of situations.

From yacht crew to yacht manager

How captain supply is changing recruitment