For this article, we reveal the responses to our survey on predatory behaviour in the superyacht industry… 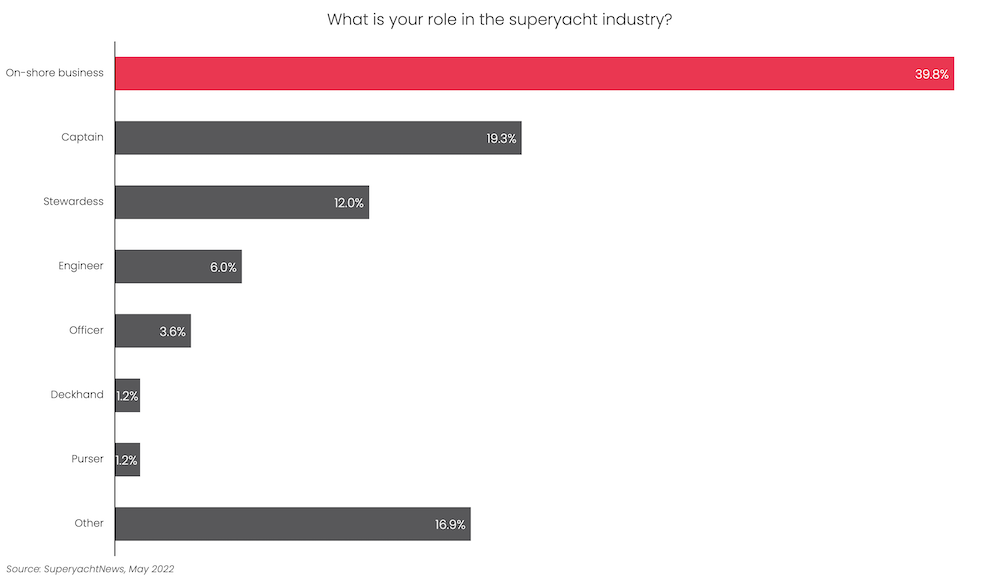 Over the past five months, SuperyachtNews has been reporting on cases of predatory behaviour and sexual abuse in the superyacht industry. In conjunction with this series of fortnightly articles, we have included an anonymous survey for our readership to take part in, we now share these results back with our readership in the hope that it will engage positive discourse and drive tangible change. Over 500 industry stakeholders engaged in our survey and roughly one fifth provided full responses (Complete with written responses suggesting solutions to the issue).

Although the survey is anonymous, the first question most readers would like to know is who is taking these surveys - for this survey we categorised responders by profession. We found that under half (39%) of responders were shore-based, whereas 43.3% are seafarers. Interestingly, more captains took part in the survey than any other crew members (19.3%), although this could also be a reflection of The Superyacht Groups' readership rather than a reflection of which crew members are more inclined to take part in the survey. Stewardesses were the third most frequent job role with 12%, other roles included engineers, deckhands, officers, recruiters, and pursers. 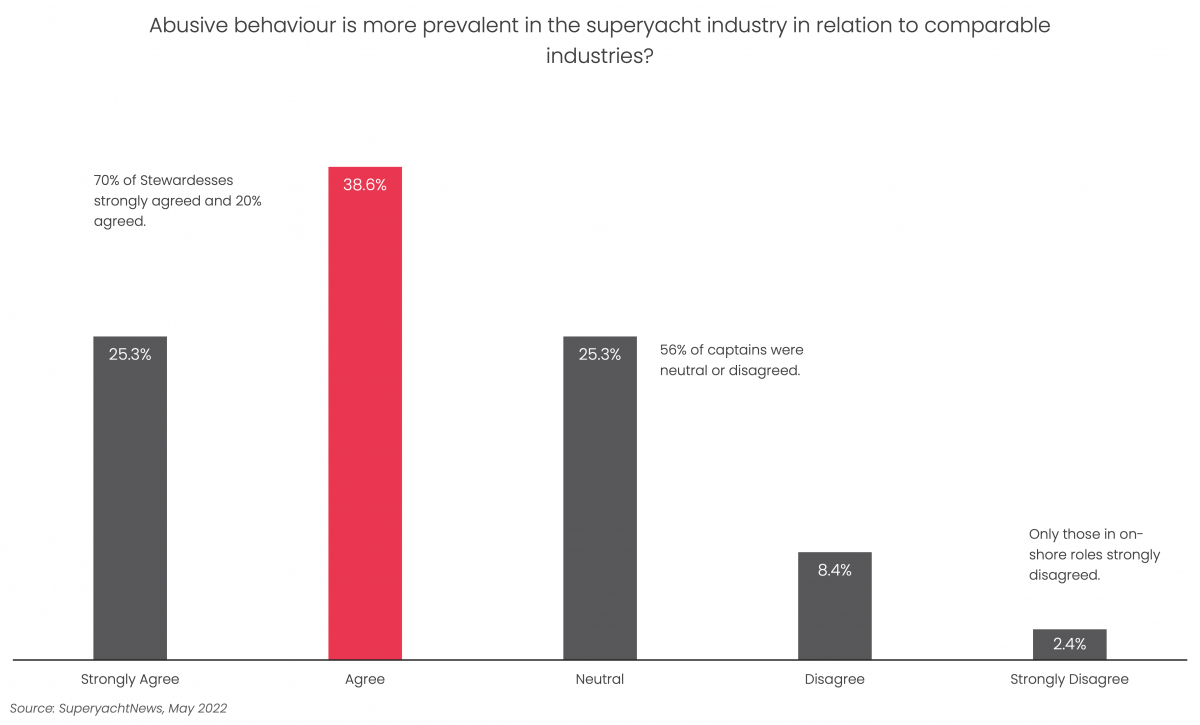 Only 10.7% of people either disagreed or strongly disagreed with the notion that abusive behaviour is more prevalent in yachting than it is in comparable industries. Of all the respondents who disagreed, just one was a stewardess while the rest either worked as a captain or in a shore-side business. On the other hand, the 25.3% of people who said that they strongly agreed with the statement came from a variety of backgrounds, with no particular professions appearing to stand out more than others. Moreover, the majority of people who agreed also gave the poorest score to industry bodies that are meant to support and give aid to victims of abuse in the private yachting world.

Overall it appears that stakeholders don’t think there is enough aid and support for victims of abusive behaviour. We asked our survey takers to rate industry bodies on a scale of one to five for effectiveness (1 being very poor and five being very good). The most popular rating was poor (37%) while the rating of very poor came second with 30.9% of the vote. It should also be noted that just four respondents said that industry bodies were very good, and all four worked in shore-side businesses. 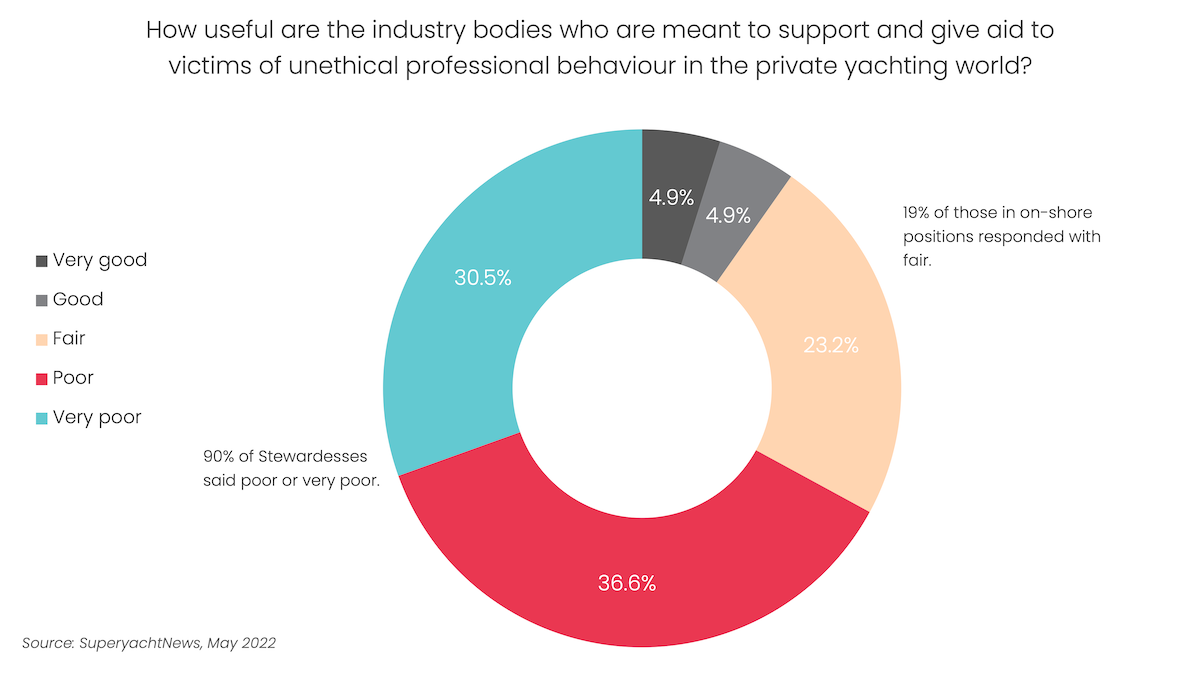 The superyacht industry has always been lacking behind worldwide social movements such as the #Metoo campaign. Mental health has only come to the fore relatively recently with managers, trainers and recruiters realising the benefits of retaining crew and ensuring that there is a healthy and inclusive environment onboard. Even the fully-fledged industry bodies are still in their nascent stages and the industry as a whole is still in the process of spreading awareness and convincing certain stakeholders that this is a serious issue.

What is perhaps the most valuable facet of this survey, is the written responses providing solutions. With this, we were able to hear a number of different opinions and perspectives from a variety of sectors in the industry. This is exactly the issue. With abuse occurring in one legal region, under flag of another, and by citizens of yet another country that may also be different from the abusee's, who/what law enforcement entity will take up the charge? Some of the responses proved to be somewhat discouraging…

While others suggested what seemed to be logical and feasible solutions…

"Individual Boat training. Everyone should have to go to a course as a team and create and know the signals for when someone is in trouble. Like a man overboard signal."

"Change the indemnity arrangements from the Owner on down. Force change via changing who owns risk. Right now all the contracts defer risk to the victim. It’s not compliant with various jurisdictions but regular people don’t know how to enforce their rights."

"Just be aware and share should be enough. The problem is the false ones and a gaggle of crew will get together and exaggerate a tiny thing into a big problem that is not really there."

In general, it appears most of the respondents had a unified response to the question - who should we be looking to for real tangible change when it comes to protecting minorities? According to our readership, management companies, captains and owners are the first group of people we should be addressing. It's not to say that they are necessarily the main culprits or that they hold all the responsibility, but one thing that management, captains, and owners do have say in, is how a boat should be run. By taking a top-down approach and putting pressure on those who have the power to inflict real change we can create a professional environment whereby the perpetrators of abuse bear the brunt of the consequences instead of the victims. 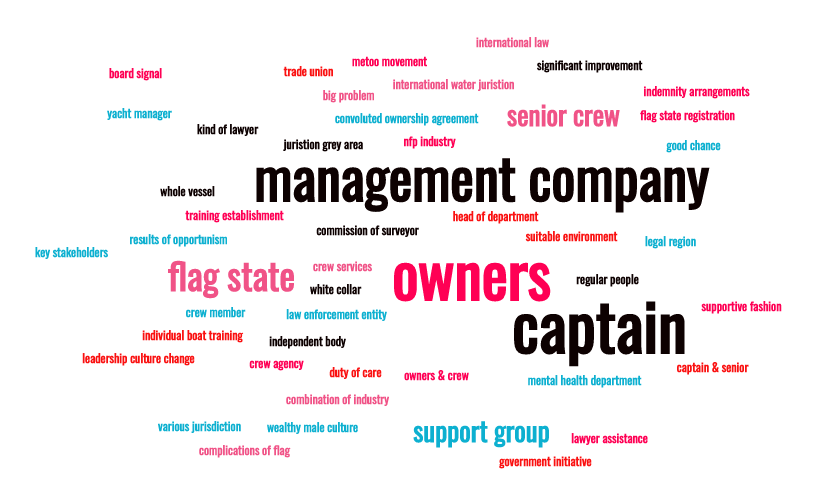 Most common words and phrases when responders were asked - Who should the industry be looking to for real tangible change when it comes to protecting minorities in the superyacht industry?