Rotation is on the rise, what impact could this have on an already candidate short crewing landscape? 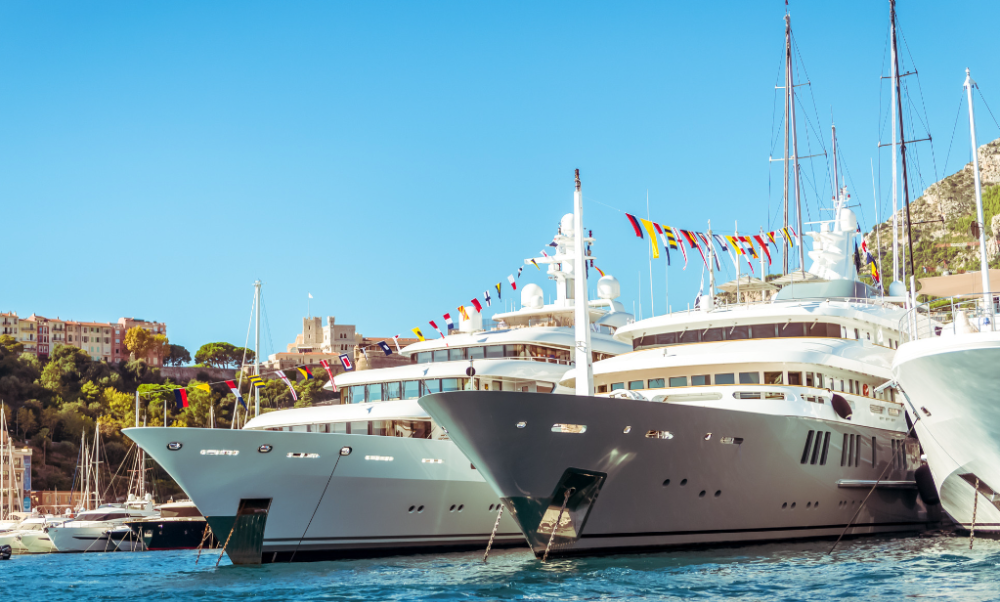 The goal of attaining a rotational position is a driving force for many ambitious yacht crew. Rotation can be held up as the ideal endpoint for crew on their career pathway through yachting, with many captains working towards it for their entire careers. It’s seen as the moment when the hard work pays off and the elusive work-life balance is achieved. However, the complexities and costs associated with it are often a sticking point for yacht managers and owners.

Rotational structures range from five months on, one month off (5:1) up to the idealised time for time spilt, most commonly two months on, two months off (2:2). When a rotation is implemented effectively, it can give a level of balance and structure to the vessel’s operational profile, the guest experience and the life of the crew on board and ashore. It also elicits a strong reaction. As a friend once put it to me, "in the industry, rotation is an emotive word."

As the comprehensive report from Quay Crew highlights, rotation is on the rise. As crew expectations for it evolve from privilege to what they feel they are entitled to, the need for quality crew may exceed the capacity of an already strained market. 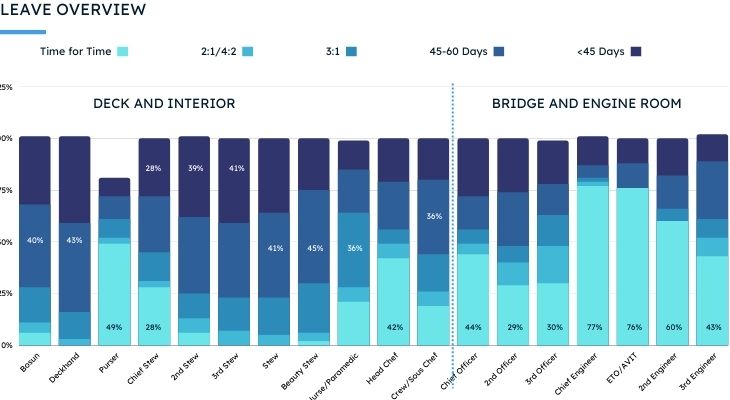 One of the key findings of the report is that junior roles offering rotation are increasing. One in three deckhands and stews surveyed are now getting some form of rotation onboard 70m+ yachts. This, as termed in the report summary, comes as the industry scrambles to appeal to more crew in a competitive and candidate-short market.

The survey was from 170 captains, who provided a full breakdown of the salary, leave and benefits packages for over 1,500 crew across all onboard departments. For 11 of the 18 roles featured in the survey, time for time rotation was the most common form of leave, including all HOD’s with the exception of chief stews and bosuns.

In a surprising finding, across all yacht sizes, 15 per cent of deckhands and 23 per cent of stews have some form of rotation. The former largely get 46-60 days leave while 28 per cent of chief stews get less than 45 days leave and the same amount get time for time rotation. 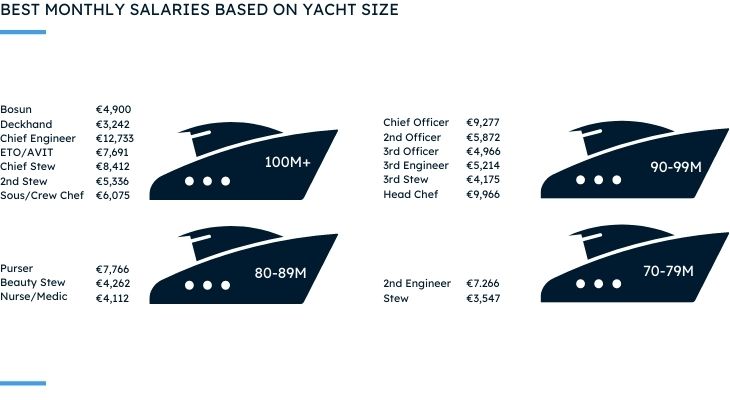 As could be expected,  there is a mostly linear increase in salaries for the senior roles with the most training expectations, such as the chief officers on 100m+ yachts. The above graphic showing the best monthly salaries proves that bigger is not necessarily better for all roles, highlighting a few sweet spots for certain roles, such as 2nd engineers on 70-79m yachts.

Although not published yet, Quay Crew will be releasing a separate report featuring the captain's salaries later in 2022.  Of note, according to Quay Crew, 58 per cent of captains surveyed said their yacht reviewed pay annually as standard, but two-fifths are still taking a sporadic or informal approach.

Tim Clarke, one of the founding Directors of Quay Crew, comments: “We’ve seen many of our own clients improve salary and leave packages for some time now, particularly for junior crew, but wanted to get a more accurate picture of the whole market. What this survey tells us is that there is definitely an upwards trend in pay as well as leave, but personally, I think it’s disappointing to see how many yachts continue to only give 60 days or less leave.”

“Having said that, I believe 3:1 will increasingly be seen as the norm for junior roles onboard 50m+ yachts and those who do not review their leave packages will become far less appealing employers for the most talented crew.” Says Clarke. 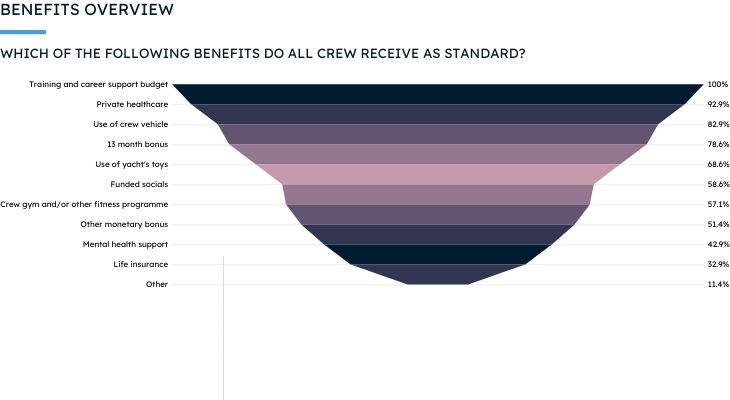 While some of the largest, commercially operated yachts offer better rotational packages, they often underperform when it comes to benefits. As highlighted above, it is encouraging to see such strong support from yachts have a training and career development budget.  Private healthcare is also one of the top additional benefits, but despite the findings of our recent mental health survey, too few yachts provide any support.

Just under half of 90-99m yachts have some kind of mental health support, followed by 80-89m (40 per cent), but only 9 per cent of 100m+ yachts offer this and none of the 40-49m yachts surveyed provide it.  No 100m+ who responded to the survey allowed the use of yacht toys and only one-fifth give a 13-month bonus and/or life insurance.

“With the superyacht sector experiencing an extreme candidate shortage and increased competition to secure the best crew in the fastest possible timeframe, yachts need to evolve their offering," Clarke continues.  "COVID, especially, has made everyone reassess their career goals and work-life balance, seeking out more leave over higher salaries and some yachts are starting to take notice."

“However, even though anecdotal evidence from our own clients suggests packages are improving, the survey reveals that industry-wide, the uptake is still slow." Concludes Clarke "The fact remains - if yachts don't review the compensation for crew, they will have to be more flexible on candidate requirements and potentially look to recruit talent from other sectors.”