Tragedies often teach us that accidents are avoidable, should the private superyacht market curb its dedication to secrecy in order to avoid future incidents? … 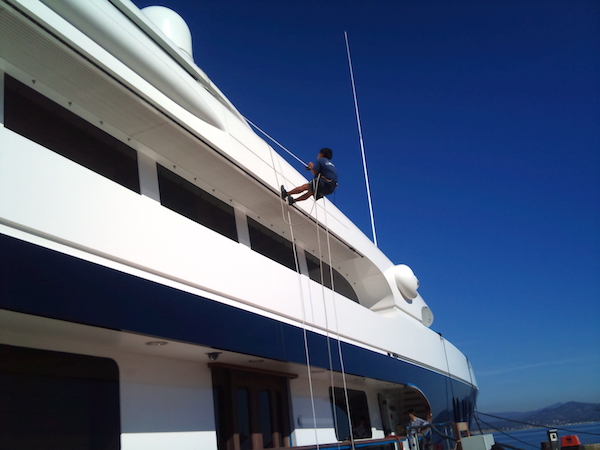 On 14 June, around midnight, a fire tore through Grenfell Tower, a 24-story residential tower block in North Kensington, London. The shocking revelations of the fire at Grenfell Tower, which has resulted in at least 80 people dead and missing, as well as hundreds homeless, raised profound safety questions for all architectural and construction disciplines, including the maritime sector. What the horrific incident highlighted was that fundamental and systemic errors can lie dormant before they cause serious damage.

As the investigation into the cause of the fire began, it became increasingly clear that errors were made at various levels of governance, from the local council refusing to listen to the concerns of Grenfell Tower’s residents, to various legislators failing to consider the protestations of those who advised against using the more flammable type of cladding – a type of covering or coating used to increase the visual appeal and energy efficiency of a building.

Since the Grenfell Tower incident, 60 other towers in 25 areas of England, as well as some student housing, have been found to have unsafe cladding. Sajid Javid, the UK’s community’s secretary commented: “We expect that authorities and landlords are very sensibly giving the highest priority to buildings with which they have the most concern…How this occurred – and preventing this from happening again – is likely to be a key question for the public enquiry”.

Within the maritime realm, it took the sinking of the RMS Titanic on 14 April 1912 to spur on the creation of the International Convention for the Safety of Life at Sea (SOLAS). But disaster should not be the catalyst for change.

It would be misguided to suggest that a number of superyachting institutions do not do a fantastic job of making the industry safer for all those engaged. The commercial yachting market benefits greatly from the IMO International Safety Management (ISM) Code and accident reporting is relatively consistent. That being said, a culture of secrecy – sometimes referred to as privacy – persists in the private market. In the private superyachting sphere, candid, but anonymous, discussion could save lives by highlighting fundamental and systemic errors, not ignoring them.

Numerous accidents and incidents occur and, in the name of protecting the beneficial owner, they go unreported, and the same is even truer of near misses. The oil industry, as well as a number of other larger industries, hosts closed-door discussions within which, and unbeknownst to the media, senior executives dissect incidents and accidents in a constructive manner. And this is a model that could easily replicated in yachting, the only question is, who would you have behind the closed doors?

Owners, who at the end of the day are the parties that control the assets, will not commit to such a system – and nor should they. To mar, what is for them a pleasurable pursuit, with additional responsibility and negativity will only damage the industry. The responsibility for such a discussion would rest, like so many other things, on the shoulders of the captains and yacht managers, far away from the prying eyes of the media and supplemented by willing participants from the commercial yachting sector.

I stress again that there are a number of institutions that do an excellent job of dissecting accidents and drawing conclusions that will save lives down the line. However, perpetuating a culture of secrecy will, at some point, cost lives – it may already have done so.