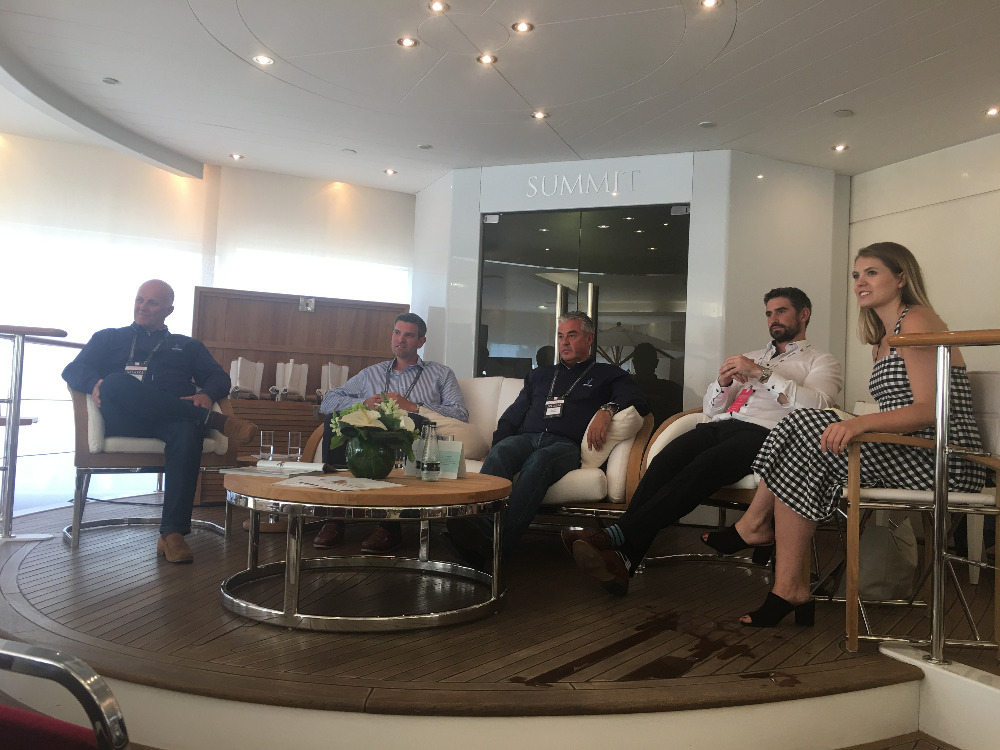 At The Superyacht Design Forum, the Summit showroom hosted a discussion on superyacht designs, and if designers who favour aesthetics over efficiency could be putting the lives of crew at risk. Wealth and philanthropy editor Rachel Rowney was joined on stage by technical expert Jo Assael of Döhle Yachts, David Goldie and Derek Munro of Divergent Yachting, and the chief engineer of S/Y Black Pearl, Richard Tatlow. In light of recent accidents, the panel examined how more intelligent and informed design can remove some of the risks at sea.

“It all comes down to communication and engaging with the right people at the right time,” offered Assael. “There is a misconception that these items are at odds with each other, but more often than not they are just neglected at the right stage, which means that when we have to implement an item – which is a very basic crew safety element. It then has to come in as a change order and has an additional cost.”

If the safety elements of the yacht can be approached in a collaborative format between technical parties and the designer early in the process, the panel agreed that these safety aspects don’t need to be disruptive or incur a long list of unnecessary costs. That is, if they higher up on the priority list and dealt with in the correct way and by the right people, which does include crew. “There is a fine balance, as we don’t want to muddy the water with too many consultants who will be pulling the safety requirements in too many different directions,” said Assael.

“Designers should also get involved in the project at a later stage. It’s not a fire and forget thing, this is a living beast that people need to operate, so go and see what you have designed and watch people operate it, and if something doesn’t work than you won’t design it like that again.”

The discussion highlighted how crew have been side-lined in this industry and the implementation of legislation such as the Maritime Labor Convention (that draws more attention to the crew and their welfare) is a great thing. “I think it’s time that the industry started to think of the crew as part of the design process, rather than dealing originally with aesthetics and then see how to fit the crew in later on,” observed Assael.

If there are cases that favour aesthetics over crew safety, it should not be something that is allowed to make it through the process of design and build. “When I look at a boat, I look at it in a very different way to a designer,” revealed David Goldie. “I look at a boat, and instead of looking at the flowing lines, I’m looking at where the safety rails are or asking where they launch the rescue boat from. So, the sooner someone from SOLAS, ISM, Flag and Class, looks at designs from the safety perspective, then the cheaper it will be at the end and by default, a safer boat for the crew.”

One of the methods that could help the process considerably is the use of 3D modeling, which is accessible to the crew and enables all involved to understand how the boat and crew will interact. “Oceanco provided us with 3D modeling told within six months of signing the contract,” said Derek Munro. “It benefited the engineers, the crew on board and the way that the boat functions.”

A major problem area on yachts is the tender garage, which are often designed in a way that doesn’t provide the crew with enough space to maintain the tender and often blocks exit routes. “The problem is that a designer will be really pleased that they managed to fit the tenders in the space with only a few centimeters of clearance,” argued Goldie. “But, how can anything be done from an engineering perspective when you can’t fit anyone in there to go and do it? There is a conflict between the designer trying to use as little space as possible and those who need to do the work.

“The way around this is 3D modeling of the tender bay,” Goldie continued. “If you 3D model it, somebody can tell the owner that the tenders that they have selected are too big and you can’t have them.” At a very late stage in the design phase, if safety issues arise and they need to be rectified, it will not only add time to the process, but it will also usually have a cost attached.

“My advice to designers is at a stage that they deem to be appropriate, they need to bring somebody else in that looks at a design operationally, not just aesthetically, and then reverse that,” concluded Goldie. “Designers should also get involved in the project at a later stage. It’s not a fire and forget thing, this is a living beast that people need to operate, so go and see what you have designed and watch people operate it, and if something doesn’t work than you won’t design it like that again.”

Tearing Up the Rulebook