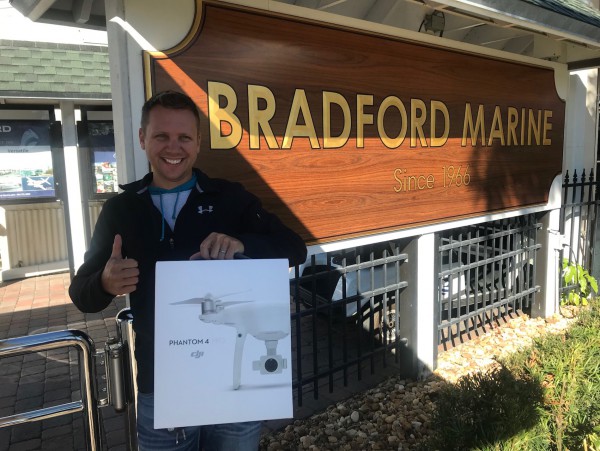 Bradford Marine recently announced the winner of its ‘Drone Giveaway’ sweepstake held during the autumn of 2017. The campaign, launched with the help of The Superyacht Group, was geared exclusively towards captains and crew and was announced online, on SuperyachtNews and via social media channels. Zach Gallagher, a yacht captain and aerial photography enthusiast, was chosen as the winner out of hundreds of entrants.

The prize included a professional-grade DJI Phantom 4 PRO Quadcopter Drone, accessories and a case. “I’m happy yet stunned that I won,” said Gallagher, who is currently interviewing with his wife for new positions on vessels based out of the West Coast. “The new drone has tonnes of high-end, autonomous features to capture stunning videography with less worry and less time behind the controls. I plan to use my new drone in my travels. We’re excited for the possibility of seeing more of the California scenery while putting the drone to good use.”

Gallagher had brought his previous yacht to Bradford for refit and repair, which is when he learned about the sweepstake. “Bradford is a great shipyard that operates very smoothly,” he added. “We appreciate the care that was taken by the contractors and technicians in the yard. Bringing the yacht to Bradford was worry-free for us since we didn’t need to shop around – everyone is right there and ready to help. It was a pleasure being at Bradford and we would love to come back.”

While there could only be one winner, Bradford Marine is grateful to the high number of captains and crew that entered. “On behalf of Bradford Marine and our support team at The Superyacht Group, we congratulate Captain Zach Gallagher and wish him well with his next yacht command,” commented Bradford’s Jimmy Floyd, Vice President, Yacht Services. “We hope that he keeps in touch, sends us some footage, and thinks of us if and when he’s back on the East Coast.”