A video that has been widely circulated online shows 36.6m Benetti-built Andiamo on fire at the Watson Island marina in Florida. It is believed the superyacht is the property of US singer Marc Anthony. Reports are currently suggesting that the incident will result in the total loss of the vessel.

According to the reports, more than 45 firefighters, as well as fire boats, were called to the scene in an attempt to fight the blaze from both the water and the land and stop it spreading to other vessels in the marina. However, the damage has been described as ‘catastrophic’.

Fire remains a major cause for concern for the superyacht market. Indeed, since 2000 there has been 55 reported superyacht fires, which accounts for one per cent of total deliveries. In fact, fire represents the second most common superyacht incident reported, with many resulting in major or complete losses. Importantly, if these fires occur in either a shipyard or marina, it is more than likely that the blaze will generate a series of claims from neighbouring vessels and businesses, whether that be fire damage, smoke damage or other fire related claims.

Rather concerningly, since 2000 there have been a total of 397 reported superyacht incidents and, when one considers the private nature of the market, we can assume that, in reality, this figure should actually be significantly higher. The 397 reported incidents represent 7.1 per cent of all 30m-plus superyachts. However, by far the most common incident is detention/port seizure and, while arguably less serious than some of the other incidents, clearly highlights the market’s need to professionalise. 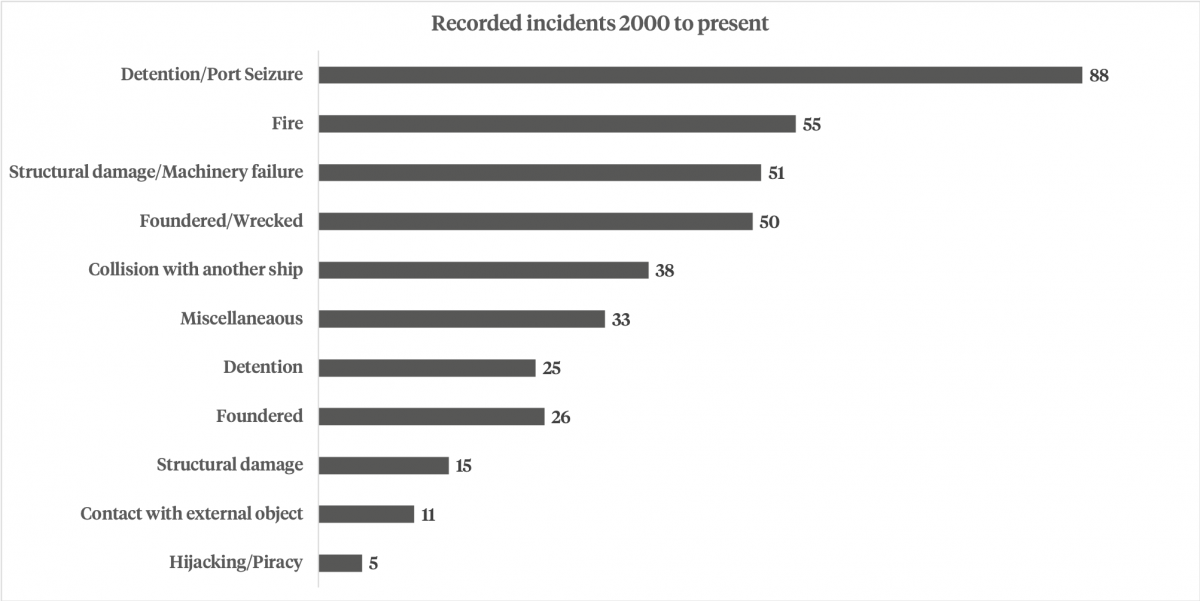 More often than not, when one considers the causes of fires on board superyachts, the natural inclination is to assume that the fault lies with one of either the new build or refit shipyards that have worked on the vessel over the course of its lifetime. The truth, however, is far more complicated. Increasingly, the causes of fires can be traced back to human error and third-party technologies.

On 7 September 2018 MY Kanga was at anchor in the coastal area of Dubrovnik, Croatia. While the first officer was on the bridge the fire panel gave off an alarm, indicating that there was a fire in the garage.

Upon inspection the first officer was overwhelmed by the presence of heat and smoke in the garage. The main fire alarm was triggered and the first officer called all crew and passengers to muster at the bow. An attempt was made to fight the fire; however, it was unsuccessful. The fire rose towards the upper decks and subsequently grew out of control. The yacht was abandoned on orders given by the master. No injuries were reported.

The ensuing safety investigation concluded that, in all probability, the fire had been caused by the Lithium-ion batteries of four electric surfboards.

Engineers, for the most part, have complete control of the engine room and technical spaces on board. They know the risks associated with these areas and they know how to manage them. The same, however, is not true of some of the more innocuous technologies that fall under the care of the crew.

As owners and guests have begun demanding more technology on board, an increasingly large number of third-party elements are being added to the vessel’s cargo, many of which rely on Lithium-ion batteries. These batteries are typically used in technologies that require charging. They are inexpensive, lightweight, powerful and, unfortunately, extremely combustible. For this reason, is it advisable that crew pay special attention to the risks associate with Lithium-ion batteries and how these differ from product to product.

While working on Kanga the crew had indicated that they were experiencing problems with the batteries of the surfboards, namely that there was sea water leaking into three of four of the batteries. They had notified the manufacturer in order to receive replacements, and the manufacturer advised the crew not to use the affected batteries. During the investigation into the cause of the fire, the crew admitted that they were not aware of how dangerous the Lithium-ion batteries were.

While we can only speculate about the cause of the fire on board Andiamo, this incident highlights just how common superyacht fires are becoming. Whether the blaze is caused by a fault with the vessel itself or as a result of human error and third-party technologies, as the industry continues to professionalise, it must be impressed upon crewmembers, guests and owners, just how common the incidents are becoming and what can be done to stop them.