€1 million in unpaid wages secured for crew of 'Indian Empress' 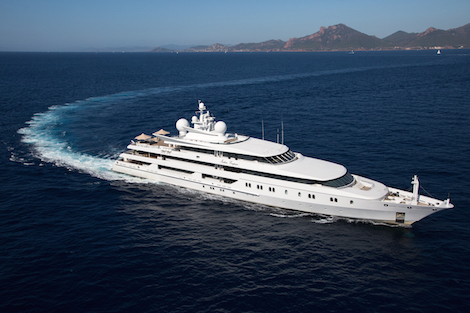 Legal experts at maritime union Nautilus have finally concluded a long battle to secure almost €1 million in unpaid wages for the crewmembers of 95m M/Y Indian Empress, which was abandoned by its owner over a year ago. Since then, the union has been representing the interests of its members that were employed on the yacht, which was arrested in Malta in March this year.

The Nautilus legal team initially managed to secure US$615,000 in owed wages following discussions with the superyacht’s P&I club under the terms of the Maritime Labour Converntion (MLC)’s financial security provisions. Having entered into force in January 2017, the financial security amendments to the MLC established mandatory requirements for owners to have financial security in place to cover the abandonment of crew, as well as death or long-term disability due to occupational injury and hazard. SuperyachtNews.com explains these provisions in further detail here.

The vessel was sold in a private sale to the company Sea Beauty Yachting for €35 million in September, after the first sale fell through. The yacht had been scheduled to be reauctioned after the previous winning bidder Crediyacht, which was representing an Iranian buyer, failed to pay the winning bid price of €43.5 million in time. However, the Maltese Court allowed a private sale of the yacht for €35 million before the second auction could take place. Crediyacht was banned from participating on the second auction and ordered to pay the difference in sale price. The yacht has now been renamed NEOM.

Since the confirmation of the sale, Nautilus' lawyers have been working with court authorities in Malta to ensure that crew are paid the remainder of their outstanding wages as part of the process to pay all the creditors. The list of other creditors includes suppliers, service providers and financiers who were owed money by the owner. A total of US$290,426 has been secured for the crew through these negotiations, with individual payments ranging between US$1300 to $55,000, and averaging $20,745.

Nautilus’ head of legal services Charles Boyle says he pleased to see the end of this long-running case. “It has been a complicated process, which was not helped by the first sale [of the vessel] falling through,” he explains. “However, it has demonstrated the importance of the Maritime Labour Convention’s financial security amendments, which meant that the P&I club Skuld paid up to four months’ wages owed to crewmembers earlier this year. Had those provisions not been there, the members would not have received this money at that stage and the value of the MLC is very clear.”