As Inmarsat’s $1.6 billion Global Xpress system comes on-stream, SuperyachtNews.com heads to the company’s operations centre to get a behind-the-scenes insight into the new high-throughput satcomms service… 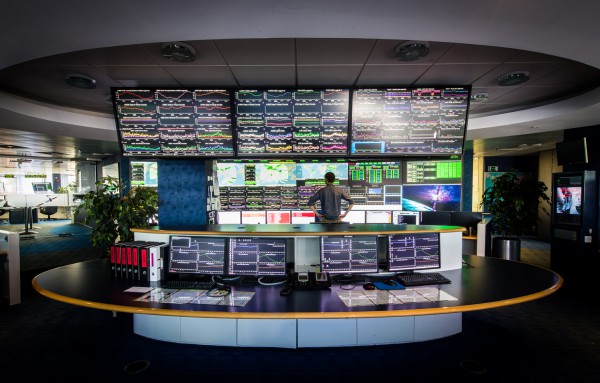 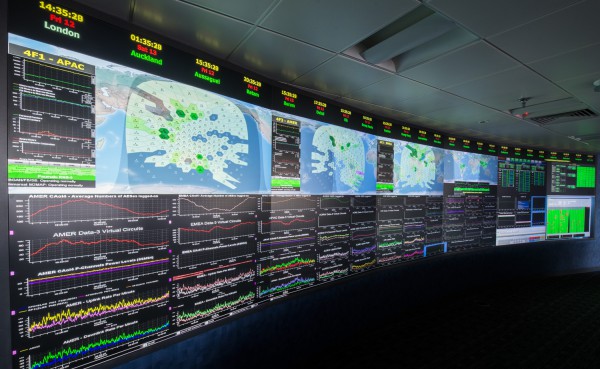 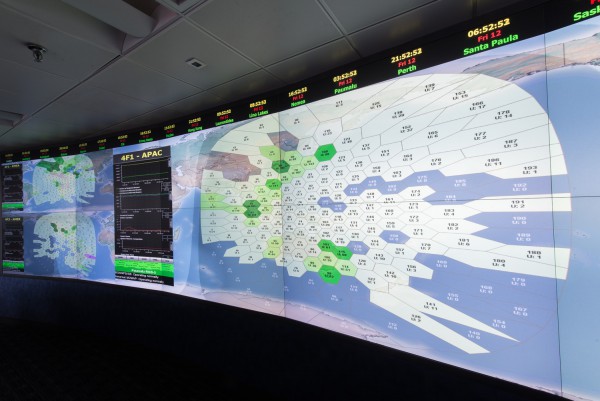 There is a reassuringly quiet efficiency in the Inmarsat operations control room. On one side, a giant curved wall of screens displays global maps with honeycomb overlays, flanked and supported by dozens of live line-graph monitors. A central, oval hub of smaller screens flickers with alerts and data, while a small team calmly points, clicks, interprets and tweaks. It feels like a Bond villain’s high-tech lair on Diazepam.

SuperyachtNews.com is exploring the operations and nearby satellite control centre that form the heart of Inmarsat’s network (below). We are here to learn more about the company’s next generation I-5 satellite network which has just gone live, providing global high throughput data for marine traffic ranging from fishing vessels to commercial ships, leisure boats, offshore platforms and superyachts.

The I-5 network – a constellation of three geostationary satellites developed and launched for a total investment of $1.6 billion – represents Inmarsat’s current next-generation global satcomms solution. Labelled as Global Xpress (the high bandwidth element) and packaged as Fleet Xpress (which combines the I-5s’ Ka-band throughput with unlimited L-band back-up for seamless global coverage), Inmarsat claims that their system is the only fully serviced, single-provider satcomms network for global coverage.

There are several aspects of Fleet Xpress, however, that Inmarsat is hoping will be game-changers. “We’re not like a traditional provider,” says Peter Broadhurst, VP of service development. “We’ve got to change the mindset of our partners in terms of you don’t need to buy a big pipe anymore. A lot of people buy a big pipe [high downlink/uplink data bandwidth] but they may only need that pipe for a short period of time, and that’s very inefficient.”

Inmarsat’s solution to this is what it calls application triggered bandwidth – essentially, individual applications will be able to call up additional bandwidth on top of the subscription data package meaning, for example, that if your general bandwidth usage is low but you need to make a satcomm-based video conference call once a month, the video conferencing app will call up additional bandwidth just for the time it’s used. Central to this is the idea that the extra bandwidth can be billed independently, or even charged back to the app provider rather than the vessel. The app provider can then incorporate this into a flat app fee, meaning far easier cost prediction from the yacht or vessel operator. “People are requesting these things,” adds Ronald Spithout, president of Inmarsat maritime, “but it’s the first time this offer is out in the market and the flexibility is there. Most of the demands you get from a vessel are based on their perception of how you used to buy VSAT.”

Other elements that Inmarsat has focused on include a separate pipe for voice to data, meaning voice calls can not only be made without impacting on data down- or uplink performance, but also that additional controls can be put in place – for example, with each crew member getting their own PIN associated with a voice account that can be billed directly to them for usage.

Currently, Inmarsat has unveiled 15 base plans each for 60cm and 1m antennas, with the top-end plan currently offering a committed information rate of 1024 kb/s down and a maximum burst rate of 4096 kb/s down, backed up by a service level agreement guaranteeing the CIR. While this upper end package may seem limiting when the demands of a modern superyacht are considered, Inmarsat is quick to point out not only that the vast majority of its customer base do not operate in the superyacht sphere, but also that it will be developing further high-end plans for specific market segments in response to both demand and the input from its partner suppliers such as e3, MCN, NSSL and SpeedCast. “We’ve achieved over 40mb/s in demonstrations and trials,” says Broadhurst, “and we’ve already been asked for packages such as 10:10mb/s down:up which will look at closely in the coming weeks and months [to broaden the packages available].”

The I-5 constellation, the launch of Fleet Xpress and the associated out-of-the-box thinking in terms of functionality, usage and potential for triggered bandwidth third-party apps is not the end of the story, however, and the development continues apace. With a continual turnover of orbital hardware, and with a need to meet increasing demands with advancing technology, Inmarsat’s tech team is already finalising the i-6, it’s next next-gen satellite, which is due to reach orbit around 2020. The new satellites will be further optimised for higher throughput capability on both L- and Ka-band frequencies. The calmness of the ops centre, it seems, belies the frantic pace of development behind the scenes.

To read more about the next generation of satellites, the issues affecting superyachts, and the future of satellite communications be sure to pick up the latest issue of The Superyacht Report, issue 169 May 2016.