This invaluable piece of market analysis is out now… 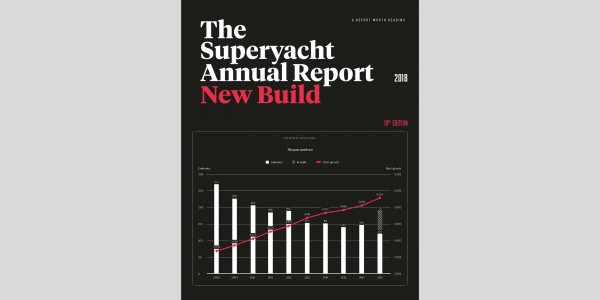 The Superyacht Annual Report 2018: New Build has been published and is now available to download.

Documenting the travails of the new build market, like any form of historical analysis, tends to bring with it segmentation of periods of activity into eras. We have the ‘modern era’, broadly defined as the last 25 years, and of course ‘the boom’ period, where between 2003 and 2007, the industry saw both a surge in output and a spike in new orders.

Of course, it all came to an end in 2008, when the world’s economy, and major markets, collapsed dramatically. And the knock-on effect has been felt by the new build market ever since, in what we’ve defined as the industry’s ‘post-crash era’ – a decade-long period of market adjustment, and consolidation.

Our first Annual Report of this new era was published at the beginning of 2009, evaluating the fleet activity of 2008. And so it is, a decade later, that we find ourselves ‘celebrating’ the 10th anniversary of this landmark moment for the superyacht industry.

The contraction of the market in this ‘post-crash era’ is irrefutable; the number of annual deliveries has effectively halved in this period, and the fall in the number of shipyards making these deliveries is even more pronounced.

But it is fair to argue, and many do, that this ‘adjustment’ is actually the return of the market to its more realistic size and scope, and 10 years after the bottom fell out of the world economy, we are operating within a sustainable new build market.

A problem still exists, in the conflation of order book numbers by shipyards around the world, which to any untrained eye evaluating the health or strength of the market, presents a distorted view of ‘record numbers’ and ‘unprecedented growth’.

But this is simply not true; and that is why we have opted to include a projected delivery number for the year 2017, as part of our cover graphic. Despite being a retrospective, this projected number of 72 deliveries is based on information provided by shipyards.

When we ceased our data collation, on Monday 4th December, there had been 124 deliveries made in the year. Yet, according to shipyard-submitted data, there were another 72 deliveries due in the remaining 27 days of the year, a percentage increase of 41.9 per cent, or 2.7 deliveries every day.

If this had occurred (which it didn’t, by the way), it would have returned annual new build output to 196 units, a figure not reached since 2010 (206 deliveries). So, when it’s put this way, it’s easy to see why analysis based on fudged numbers and projections conveys a period of record market growth.

We’re sometimes accused of cynicism, but we prefer to see this intrinsic and insightful work of analysis as one of candour and realism. I think this objective stance is to the benefit of all who read it, and to those who do, I firmly believe you will find this to be the most informative piece of new build market reportage published to date.

Memo from the Deck Chairman: Is it going to be a Happy New-Build Year?