SuperyachtNews.com - Fleet - The rise of the sportfish

The rise of the sportfish

We examine America’s love affair with the sportfish, the most idiosyncratic of vessels… 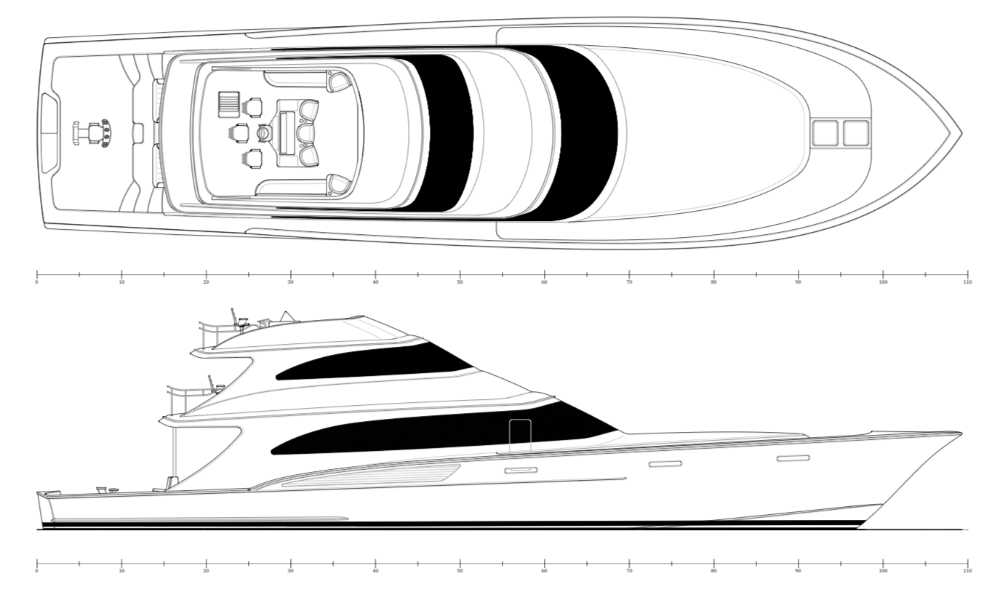 The sportfish is a boat that is entrenched deeply at the heart of the US market. It’s actually rare that one would stumble upon one of these wonderful vessels anywhere else in the world, but the passion that the American market has for sportfish boats is undeniable. However, while most sportfish boats remain below the 30m threshold, there are a handful that take it to the next level and merge the sportfish lifestyle with that of a superyacht. Moving up to the 30m-plus threshold appears to be a relatively new concept for this sector of yachting, but it is certainly a very exciting one that will hopefully develop further.

Jarrett Bay Boatworks, which has specialised in the construction of sportfish yachts since 1986, has unveiled a striking new 110’ concept that takes all the best parts of a typical sportfish boat and amplifies them to create an advanced custom-build sportfish yacht over the 30m mark. Thanks to pioneering technology and America’s unconditional passion for sportfish boats, we are now seeing larger versions in the design sphere, some of which have come into fruition, others that remain at conceptual stage. But is the American sportfish obsession only for those below 30m or could we see more 30m-plus yachts enter the market in the near future?

“The popularity of sportfishing, on the eastern US in particular, is being tremendously influenced by the Gulf Stream and all of the abundant species of fish it constantly supplies up and down the coast,” says Gary Davis, new construction superintendent at Jarrett Bay Boatworks, North Carolina. “The natural movement of fish creates a very predictable pattern, which drives the numerous [fishing] tournaments in their respective locations and time frames.”

“The popularity of sportfishing, on the eastern US in particular, is being tremendously influenced by the Gulf Stream and all of the abundant species of fish it constantly supplies up and down the coast. The natural movement of fish creates a very predictable pattern, which drives the numerous [fishing] tournaments in their respective locations and time frames.”

It appears that sportfish boats provide the perfect balance between the joy of fishing and that of speed – a much-loved combination in the US. Unfortunately, this passion isn’t something we see as much of in the European market, perhaps because of the reason outlined by Davis above. Of course, there is still a passion for fishing and speed in Europe but the motoryacht market there hasn’t the same desire to create as many of the classic sportfish boats as in the US. There have been a handful of sportfish yachts from European shipyards such as Feadship, which built the 26.6m custom sportfish yacht Patriot in 1984, or Hakvoort which built 34m Ace of Diamonds in 1988. But when the European market thinks of a yacht over the 30m threshold, sportfish vessels don’t seem to be considered.

Jarrett Bay Boatworks’ new 110’ sportfish yacht, its most advanced custom design to date, aims to cater for exactly what the market needs for yachts above 30m, with its ‘striking profile and perfect proportions’, as described by the shipyard. When researching and learning more about this niche area of the superyacht market, I find myself appreciating their design that bit more each time I delve into the details. The sportfish is a functional boat with both style and gumption. Not only that, it caters to a market that don’t necessarily want something that looks completely different from other boats around it, but is far more concerned with what the boat can actually do and how it performs.

While there are a number of 30m-plus sportfish yachts out there, these larger versions seem to be a relatively new concept. However, it does seem they are becoming more common. “The trend over the past few decades has been towards larger boats, and that pattern seems to be continuing,” says Davis. “If you look back 20 years ago, a boat of 55 feet was considered pretty large and 30 knots was extremely fast. Now, with the development of more horsepower, lighter and stronger construction methods, and more advanced equipment, the gradual increase to larger boats has been the trend.” So while these concepts are relatively few in numbers, perhaps we will see more shipyards beginning to focus on this area of the market.

The new Jarrett Bay 110’ concept has been developed to incorporate all the amenities that an owner could possibly need from a high-performance yacht. The in-house team has incorporated the most frequently requested items from the existing Jarrett Bay client base such as Seakeeper gyro stabilisation, whole boat control systems, unmatched electronics, navigation and A/V systems, and seawater desalination systems. The team have taken the design one step further and included a breakfast bar and common area centrally located below with the guest cabins, as well as a third generator that provides for an ultra-quiet sleep mode.

But it’s the speed and power that has been a focal point for the design; because of the enormous leaps in engine technology, shipyards such as Jarrett Bay now have the capacity to integrate propulsion systems that can propel sportfish yachts as large as the 110 up to speeds that were totally unfeasible a few years ago.

“In today’s market, boats in the 90-foot class and larger, such as this 110, are more and more commonplace, along with speeds approaching 50 knots,” says Davis. “This gives owners the capability to travel much more and use the boats in a combination-style arrangement, crossing over between traditional motoryacht amenities while at the same time allowing sportfishing requirements of speed and manoeuvrability.”

One thing that becomes apparent when researching these wonderful boats is the passion behind them – a passion which seems comparable to that of the sailing-yacht market in Europe. While we are focusing here on the new Jarrett Bay concept, there are a number of 30m-plus sportfish yacht concepts peppered throughout the industry, some of which have come into fruition. This year, for example, Auckland-based shipyard Yachting Developments delivered 39.5m M/Y Lanakai which is recognised as one of the largest carbon sportfish yachts in the world, and received another order earlier this year for a 33m custom sportfish project designed by New Zealand studio Warwick Yacht Design. The company has also been closely associated with a number of other large sportfish projects, including 27.4 Satu in 2012.

The new Jarrett Bay Boatworks design is an evolution of its clients’ requests, and it certainly appears it will enhance the sportfish experience, making it bigger, faster and better as larger versions hit the water around the globe. This 110’ project is an interesting approach for the American builder, with an enclosed bridge, something the shipyard had never done before. However, for the larger projects it seems this would be the best option for a boat which, according to the shipyard, is also considered to be an explorer yacht.

“The time frame of construction on something like this would likely be three years at a minimum,” says Davis. “However, construction time is largely driven by each individual owner, and the level of work to accomplish individual expectations. All of our boats are completely custom to each owner, so individual tastes and requirements can vary significantly.”

As someone who was previously quite ambivalent towards sportfish yachts, I feel there may be a small place in my heart for these truly fun-filled passion projects. They are designed to cater to a market that has a desire to mix fishing and speed which, to me, now seems very appealing. Therefore, while we’re not going to see anything like as many sportfish yachts above 30m as we do below that threshold, we may see the numbers increasing in years to come, which I, and certainly many others, would unquestionably welcome with open arms.

This article originally appeared in issue 190 of The Superyacht Report, to find out more and to subscribe, click here.