SuperyachtNews.com - Fleet - Do we need to update the superyacht general arrangement?

Do we need to update the superyacht general arrangement?

As technology and design in the superyacht market evolves, is there a need to update the general arrangement? 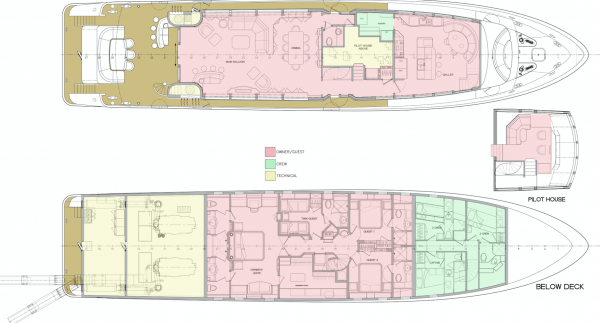 While superyacht exteriors continue to evolve, there is one element that appears to be consistent in superyacht design – the general arrangement (GA). As superyacht design becomes increasingly futuristic, is there a need to update the GA, or would there simply be too many issues to contend with in order to make drastic changes feasible?

In many cases, clients wouldn’t want the GA to be altered as, despite being slightly outdated, the standard arrangements work. However, times are changing and technology is transforming the industry in such a way that we are capable of creating ever more advanced vessels. So if current technology is at a standard that can facilitate these changes, why not use it to create a revolutionary superyacht with a completely reimagined arrangement. But, how difficult would it be to work around regulations to make the new arrangement compliant?

“There are a number of regulations that are changing or have changed to facilitate more alterations to the GA,” says Jo Assael, yacht codes specialist at Cayman Islands Shipping Registry. “For example, historically, guest cabins wouldn’t be placed on the lower deck because you couldn’t have particularly large windows, but, as technology improves, we’re now able to allow larger windows bellow the bulkhead deck due to advances in technology.”

This example in particular shows us that the GA has evolved in tandem with technology and now the placement of the guest cabins can be altered for a more pleasant experience on the lower decks because of the larger windows. A number of GAs are also being altered in favour of the owner’s private spaces aft, instead of the guest spaces. “We are beginning to see more interesting things like having the main deck guest areas forward and having the owner’s area aft and on the upper deck, looking aft because of the full beam space,” says Assael.

However, while it’s important to cater for progression in the industry, there is no way to avoid adhering to regulations. The Cayman Islands Shipping Registry believes that there are always different ways to approach a compliance issue in order to work design elements in the yachts favour.

At the 2016 edition of Superyacht DESIGN Week, a discussion called ‘deconstructing the GA’ was held to explore how the common arrangement can be altered and how designers can offer something different. Here the consensus was that there is a desperate need for creativity in the GA. But for a 50m superyacht, how are designers supposed to introduce additional features such as spas, games rooms etc., while keeping all the essential elements of the layout when the gross tonnage of the yacht remains the same?

“The clients want to maximise their routine, and how do we do this with only the same space as the generic GA?” says Mike Worthington-Leese, senior partner at Winterbothams Ltd. “You’ll always have the generic layout [in a 50m superyacht] where you have the owners cabin, the galley, four to five guest cabins, maybe two saloons and dining room – but the creativity comes into play when you look at how the designers take the basics of a layout and come up with something different”

The issue of the generic arrangement comes down to the feasibility of a designer’s creativity, but it may not be as complex to introduce major changes as one may think. “Its not all compliance,” says Assael. “There are always ways to look at it differently. So long as we do the analysis and we look at it from an engineering point of view we can always do something which slightly different from the standard regulations.”

Effectively a change in the GA comes down to the client and their wishes, whether they want to use the yacht differently to others is a vast factor in its reinvention. But, it is certainly feasible, as explained by Assael, and there are effectively two major compliance elements which have to be included – bulkheads for water tightness and sectioning off for fire control. Once these are achieved, there is certainly room for manipulation within reason. Whilst the standard GA works, it seems that there is a need for an update to keep alongside the monumental advances in design and technology.