Less than a month after the sale of its 125 model, the Italian shipyard has sold the Wider 150...…

More than a year after her launch, the sale of the diesel-electric Wider 150, now called M/Y Bartali, comes as something of a relief to the Ancona-based shipyard, which is due to launch its flagship 165-foot model in April. Coming hard on the heels of the announcement that it had sold a Wider 125, the second purchase represents a welcome injection of capital.

“We are, to say the least, overjoyed,” says Sales & Marketing Director Jeremy Roche. “It’s true the 150 was launched at the end of October last year, but then she went through an extensive commissioning process and wasn’t completed until she left the shipyard at the end of April. Maybe we were over optimistic, but we thought she would sell in time for the summer. There was a lot interest, but nothing was concluded.”

The sale was made with the assistance of Golan Levi of Swell Yachting. The Canadian client went aboard the 150 twice during the Monaco Yacht Show. He followed up with a visit to the shipyard shortly after, and again just prior to signing the contract in mid-November. As a fan of water sports, the drive-in garage and large Wider 32 tender were major attractions.  The sale price is confidential, but it is certain to be less than the original asking price of €26.5 million. “Suffice to say,” says Roche, “we are reasonably happy.”

News of the latest sale comes less than a month after a northern European customer signed a contract for a Wider 125 (renders above), which is due for delivery in spring 2019. The owner, an experienced charter client, was assisted by Georges Damonte of Damonte Yacht Consulting. The all-aluminium vessel retains the distinctive exterior styling of the 150 and the 165 by Fulvio De Simone, as well as the same diesel-electric technology.

“We first met the client in Cannes in 2015, when we were talking with him about the 150,” says Roche. “He came to sea trial the yacht early in 2016, and returned with his family. He loved it, but he was adamant that he didn’t want to go beyond 40m with his first boat.”

Wider has specifically chosen to champion diesel-electric propulsion and technological innovation. The recent sales and a list of industry accolades seem to vindicate that strategy. At the World Yachts Trophy during the Cannes Boat Show, the 150 won the award for 'Most Innovative Yacht' in the 38m-54m category. Further recognition came at the MYS Awards Ceremony on the eve of the Monaco Yacht Show when the 47m received the 2016 MYS/RINA Award as the most eco-friendly superyacht exhibited at the event. She is also the first yacht to obtain the highest possible 100/100 rating from RINA for her extremely low levels of noise and vibration.

In the meantime, work on the Wider 165 is progressing on schedule for her launch next spring (commissioned by Wider’s principle investor, Malaysian billionaire Tan Sri Lim Kok Thay, the flagship yacht is available for sale). The fairing, wiring and plumbing is largely complete, and the four generators – the heart of her diesel-electric system – were being installed at the time of writing. With the liquidity resulting from two yacht sales, the shipyard is now looking to maximise its production capacity, which might mean building on speculation.

“This is one of the conversations we’re having right now,” says Roche. “We have the capacity to build a second 125 and we’d very much like to do that. We’re talking with two or three interested parties, but whether we move forward by building on spec has not been decided yet.”

Class societies and the promise of progress 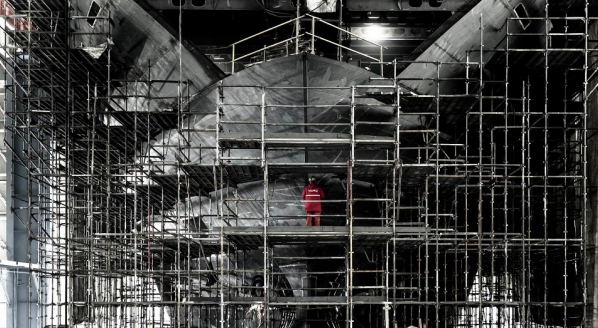 In light of the pandemic, Cleanmarine GmbH is offering a process for residue-free disinfection of yacht interiors