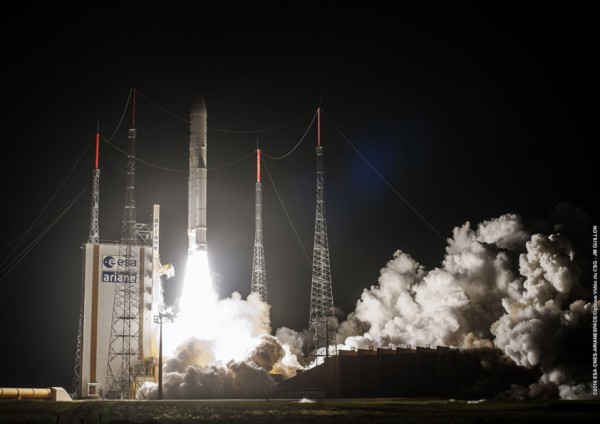 Intelsat has announced the successful launch of the first of its EpicNG satellites. The launch took place from French Guyana aboard an Ariane 5 rocket on the 27 January, with Intelsat confirming signal acquisition shortly after. The satellite – Intelsat 29e – replaces Intelsat 1R at 310 degrees East and will provide next-generation communications to the Americas, Caribbean and the North Atlantic regions.

“Today’s launch represents a truly ‘epic’ moment in communication’s history, as we begin a new era of high throughput satellite services for our customers,” said Intelsat’s CEO Stephen Spengler. “The EpicNG platform will deliver high performance, improved economics and simplified access that will expand the addressable market for our solutions.”

The EpicNG platform was conceived four years ago in response to growing demands on the limited bandwidth offered by older satellite technology. EpicNG (pictured below) combines wide beams and spot beams with frequency reuse technology to offer much greater capacity on C- and Ku-band, with backwards compatibility with Intelsat’s existing satellite fleet and terrestrial infrastcuture, allowing customers to use currently deployed hardware to access the high performance connectivity. In particular, the spot beam technology will mean users in the high-traffic routes – such as the North Atlantic or Mediterranean – will not suffer due to higher bandwidth demand.

“Every part of the maritime sector is demanding broadband connectivity at sea that is on a par with the service they receive in the home or office,” Kurt Riegelman – senior VP of sales and marketing at Intelsat – tells superyachtnews.com. “Intelsat 29e, the first of seven Intelsat EpicNG satellites in the pipeline, meets this need by providing throughput about 10 times that of traditional satellites and triple that of certain next-generation Ka-band maritime solutions. The design elements behind EpicNG allow for higher modulation schemes that dramatically increase the number of bits delivered per MHz, resulting in lower cost per bit for the service provider.”

The launch marks the first of a series of planned orbital upgrades over the coming years, with Iridium also announcing that it will be replacing its satellite network with next-generation hardware. Riegelman is quick to point out too the work that Intelsat has been undertaking with partners specifically in the superyacht sector. “Intelsat is also focused on making access to satellite capacity and services easier than ever,” he explains. “For the owners and operators of superyachts, the flat-panel antenna work we have undertaken with Kymeta will deliver this connectivity via innovative, flat, electronically steerable antennae. These will be easier to install and require lower power than current antennae – and replacing the current satellite dish with a flat panel is good for aesthetics, while also making the improved [EpicNG] connectivity available to smaller vessels.”

Intelsat 29e is currently undergoing in-orbit testing. The next launch – Intelsat 33e, is scheduled for launch in Q3 of 2016 and will provide services in Africa, Asia-Pacific and Europe, including the Mediterranean. The launch of Horizons 3e, scheduled for the second half of 2018, will complete the global Intelsat EpicNG footprint with coverage of the Pacific Ocean region. “By 2020 there will be seven Intelsat EpicNG satellites in orbit,” Riegelman concludes, “and in combination with our IntelsatOne Flex service they will provide end users with reliable broadband connectivity wherever it is required around the globe.”