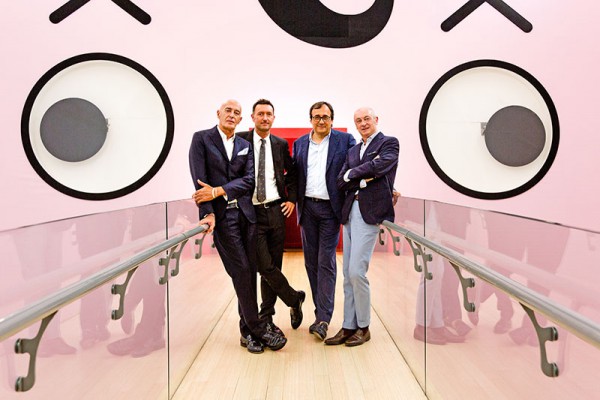 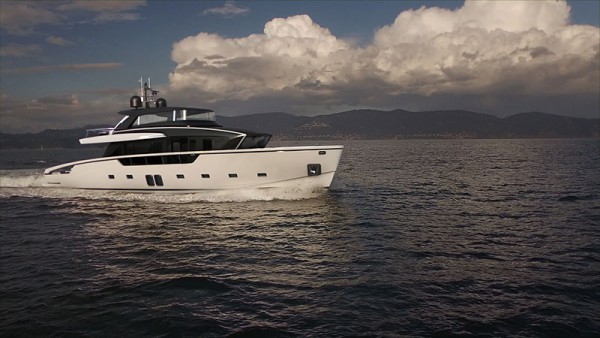 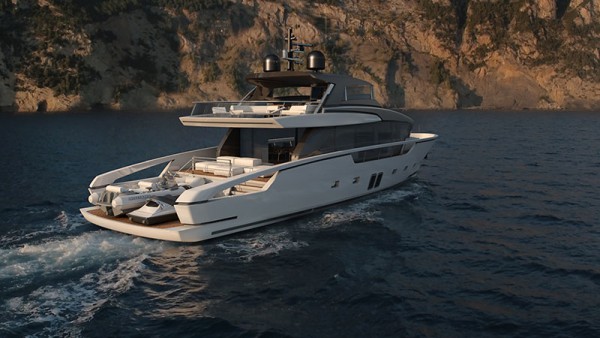 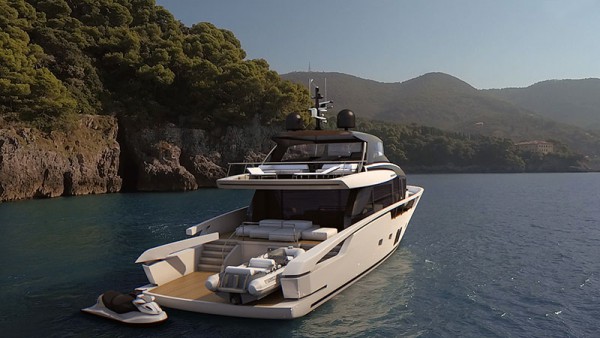 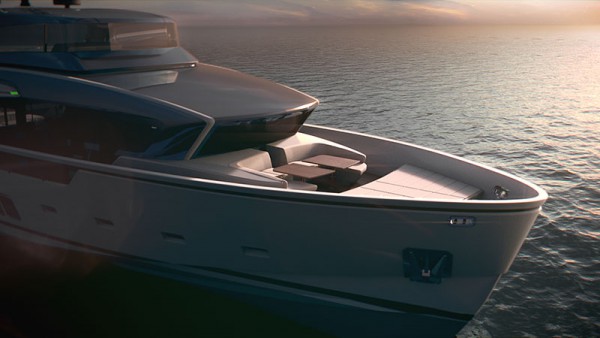 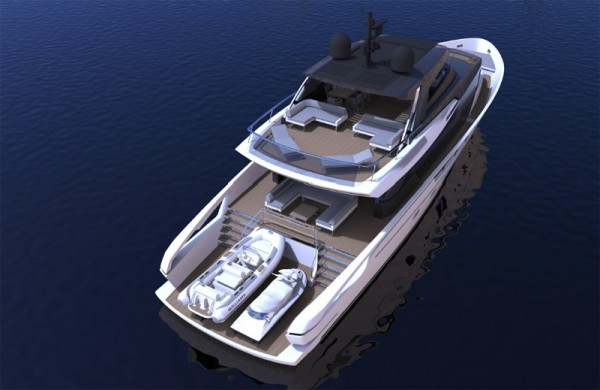 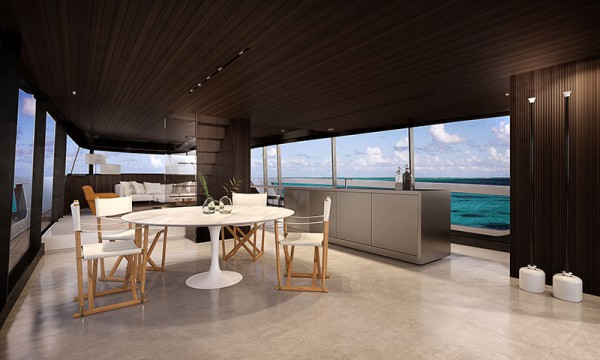 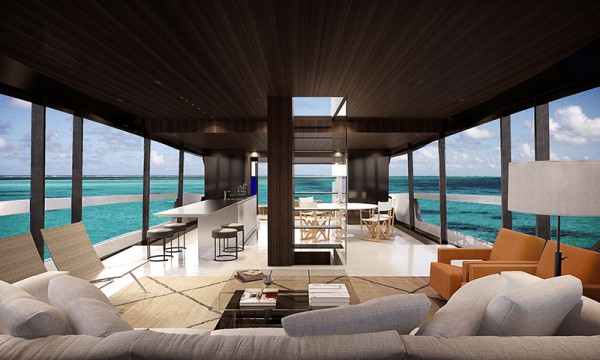 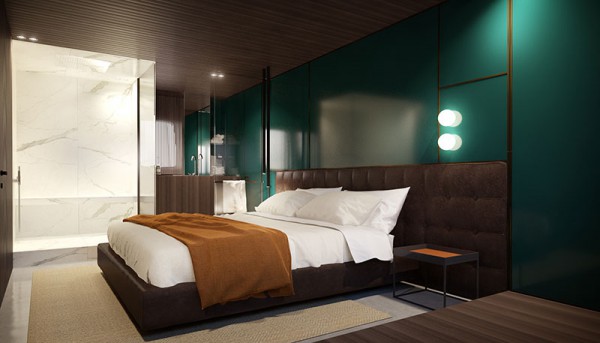 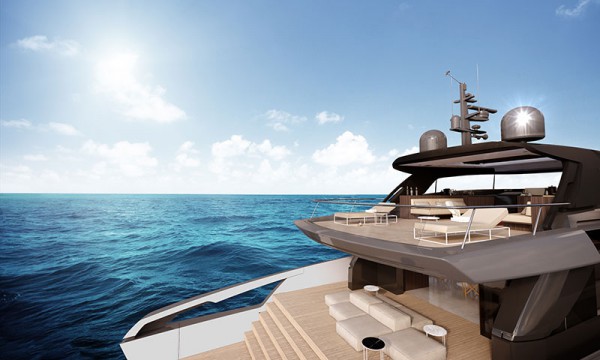 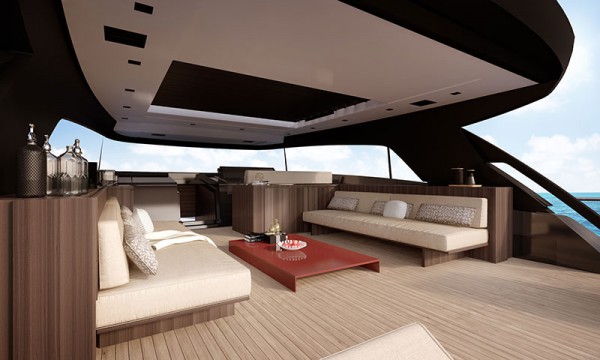 Unveiled at a press conference in Milan's Triennale exhibition space, the 27m SX88 is the first model in a new GRP series from Sanlorenzo ranging from 72-104 feet. Sanlorenzo describes the concept as a “Copernican revolution” based on some key characteristics, starting with the semi-displacement hull form that was tank tested at the Wageningen facility in the Netherlands to optimise performance up to a top speed of 23 knots. Powered by 3x IPS 1050 Volvo (800hp) engines, at 12 knots it will have a range of 1,000nm.

The exterior design by Mauro Micheli of Officina Italiana Design (pictured above left, with business partner Sergio Beretta, Sanlorenzo chairman Massimo Perotti and interior designer Piero Lissoni) certainly introduces a new aesthetic with its angular lines and forward leaning windscreen at main deck level. The Bergamo-based studio, well known for its work with Riva, was contracted by Sanlorenzo to design six models over a three-year period and the new SX range integrates the brand DNA of their SL76 and SL86 into a new and exciting design language.

The open transom brings guests into closer contact with the water and when underway the 18.5-sqm beach platform is used for storing tenders and toys. To this end, a crane has been elegantly integrated into  the portside hull styling.  There is also a passarelle, which doubles as a swim ladder, and a storage locker built into the flush teak decking.

As the helm station is on the fly deck, the main deck has been freed up to provide new layout options. The more traditional GA has the owner’s suite on the main deck forward with four guest cabins on the lower deck. The second layout has four cabins (including the owner’s suite) below deck and the galley on the main deck, which now becomes an open-plan living space with direct access through the interior from the aft cockpit to the foredeck lounging area. In both cases, the aft crew quarters are between the engine room and the guest accommodation instead of forward as is more common on this type of yacht (the two GAs are achieved without moving any structural bulkheads so as to streamline the production process and minimise waiting times).

The Milanese architect Piero Lissoni was brought in to devise the interior layout and design. Lissoni describes himself as an “interloper” in the yachting industry having designed the interiors of just two previous yachts: the 50m explorer Tribù and the 36m sailing yacht Ghost. But the fact that he is not a yachting specialist meant he brought a fresh eye to the design, and it was he that proposed the open-plan arrangement on the main deck.

Sanlorenzo has also paid close attention to environmental issues with LED lighting throughout, bio resins and core materials, Class A+++ appliances, formaldehyde-free furniture and FSC certified woods. Combined with high power lithium batteries and efficient thermal insulation for the large areas of glass, the SX88 can use all the hotel services for between 4-8 hours with zero emissions.

“The idea behind the SX88, which was in development for three years, was to appeal to a younger age group, so you could say it is aimed at the children of our current owners,” says Sanlorenzo chairman Massimo Perotti. “I believe the market needs something new and we’re pinning a lot of hopes on this new model.”

The gamble appears to be paying off and eight units, with prices starting at €5.4million, have been already signed for on paper. The first SX88 will be presented at this year’s Cannes Yachting Festival. The SX72 will follow in 2018 and the SX104 in 2019.

Perotti began his presentation with a financial overview of the company, which since he acquired it in 2004 has seen a compound average growth rate of 18.7%. Between 2015-16 turnover grew from €220 to €314 million, an increase of 42%, and with 28 yachts currently in build across three facilities, production has also increased by 40%. These figures prompted Perotti to announce “the effects of the financial crisis are well and truly behind us.”

More innovations from Sanlorenzo are in the pipeline. In 2015, it announced a collaboration with the American designer Chris Bangle, formerly head of design for BMW. When questioned about the relationship, Perotti revealed that together they have developed new design solutions to be announced next year that “will take the industry by storm.”

The largest Sanlorenzo ever built sold