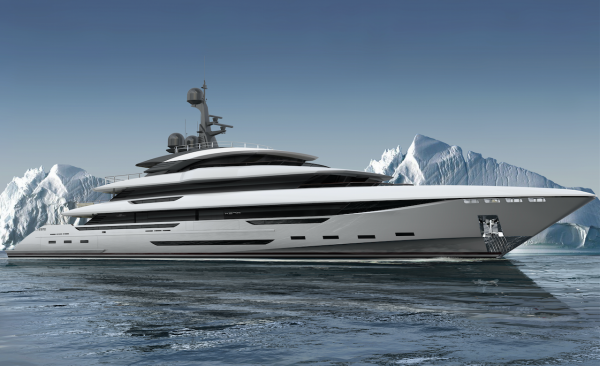 When one trawls the archives of Rossinavi’s delivered fleet, one can only admire the yard’s penchant for variety. Whether it’s a steel replica of a ship from the early 1900s, such as Taransay, or an ultra-modern semi-planing aluminium vessel such as Polaris, there is little sense of monotony.

The Italian yard has now announced the sale of King Shark, one of its 70m concepts – a motoryacht with a clean, orthodox exterior profile. In many ways, her exterior appearance and size is similar to that of Turquoise Yachts’ 77m Project Victory, which is the largest sale of the year so far.

King Shark will be built at Rossinavi’s shipyard in Viareggio – the same facility that completed the yard’s largest project to date, High Power III, also 70m in length.

She will feature the design work of Team For Design – Enrico Gobbi, which is currently working on five of the six projects in build at Rossinavi.

The brief for the vessel was for an ice class hull that would allow navigation from the warm waters of the Caribbean to the sub-zero conditions of Antarctica – and in doing so, retaining the appearance of a non-commercial vessel not necessarily designed for such passages.

Her specifications look to be very much in favour of long-range cruising. A diesel-electric engine configuration will carry her a globetrotting 6,000-plus nautical miles at a 12-knot speed. She will also be able to cruise at 15 knots and reach a maximum speed of 17 knots.