SuperyachtNews.com - Fleet - Project Domus, because why not?

Project Domus, because why not? 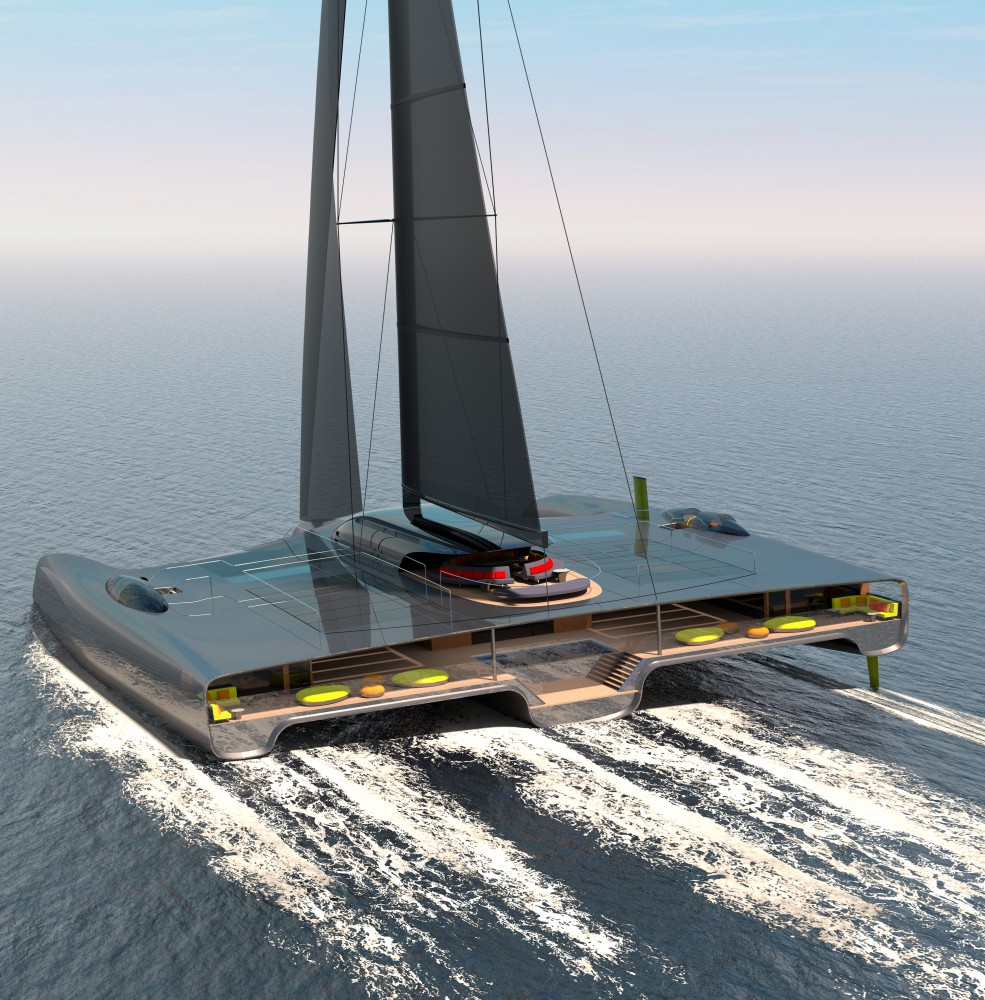 Rob Doyle, Pieter Van Geest and Mark Small are veteran yacht designers fuelled by the lack of innovation in their professional landscape, and their latest concept, Project Domus, embodies their strive for true innovation. This concept is sleek, modern and incredibly unique, but it has also got a whole bunch of attitude, it's a defiant non-conformist that doesn’t want anything to do with all the other ‘trendy’ yacht designs circulating in the media. Love it or hate it, one thing Project Domus does very well (as every great concept should) is question the status quo. Why a trimaran? Why just one deck? Why hydrogen fuel cells? Why the enclosed protective space? And the answer to all these questions is, in a sense, a reflection of the concept's very nature; because why not?

“‘Domus’ is a word that originally derives from ancient Rome, they were a type of townhouse occupied by the upper classes and featured a single-storey house built around a courtyard known as an atrium” explains Van Geest. The trimaran version of this space is designed to heel at 2 degrees to allow the weather hull to come out of the water, thus reducing drag and increasing the performance - something that would not be possible if it had been replicated as a catamaran. This version of a 40m multihull is also faster than a typical catamaran, easier to build, cheaper to build, and offers substantially more space. 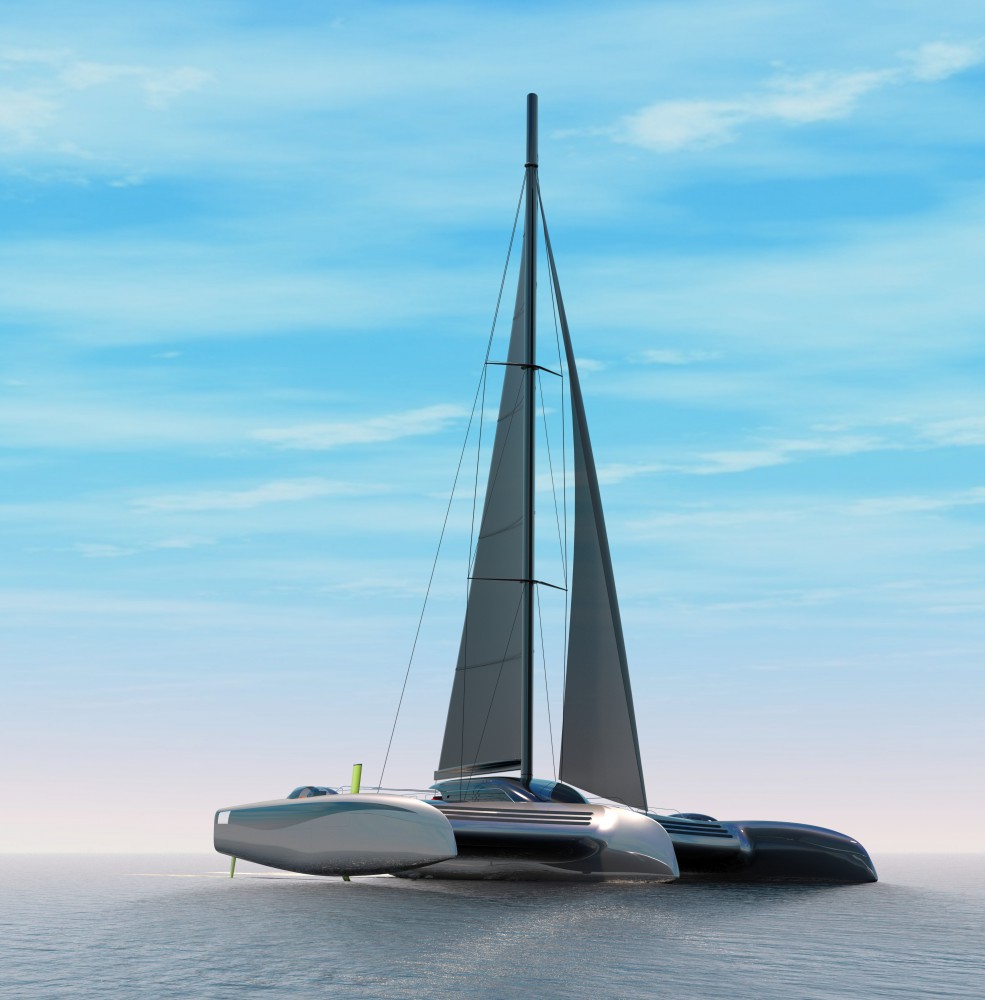 It is somewhat frustrating how many future concepts claim to be ‘fully sustainable’ and ‘zero emission’, when in reality the technology they are proposing hasn’t even been properly tried and tested and could never be achieved. With that being said, Rob Doyle argues that Project Domus could be the first truly zero-emission yacht over 750 gross tonnage, “If the right person came along and said that they wanted to build this yacht, and there was a shipyard willing to do it, then yes, Project Domus could be built, it is completely feasible.”

The uniquely designed combination of solar power, hydro regeneration and hydrogen fuel cells gives Domus an unlimited range with zero emissions. An optimised system of solar power and battery storage allows the yacht to motor during daylight hours and then transfer over to the battery system at night. This also means that the vessel would be fully silent with zero emissions while at anchor.

Speaking to SuperyachtNews, Mark Small, technical director of Rob Doyle Design, clarified the green credentials of the concept,  “The vessel is really making its own fuel, and then storing it in hydrogen or batteries. So it is a real true hybrid, it’s not just diesel-electric that actually only has diesel as the only input of fuel. And that is partly why we can be very confident when we say that this will be a zero-emission vessel.” To be clear, this claim does not also mean that the entire project is carbon-neutral, as it does not take into account the building and refitting of the vessel.

Managing and optimising space is a major component of superyacht design, and recently Doyle, Small and Van Geest have been searching for the holy grail of space management. Project Fury, their most recent monohull sailing yacht concept, increased interior space by 5 per cent. The designers claim that the Domus design doubles the interior space when compared with a typical 40m catamaran. With there being just one main deck, without any steps, there is a unique villa/bungalow feel to the onboard experience.

Recently there has been a nauseating trend to make every yacht ‘at one’ with nature and its surroundings. Yes, of course, when you are out on the water in pristine locations it is great to feel connected to the environment, but when you consider the connotations of family, privacy and even seaworthiness, then exposure to the elements isn’t what usually springs to mind. The atriums in the interior of Domus allow for free-flowing movement, whilst respecting individualism and privacy. Every space in the yacht also features a view of the outside, so the connection is not altogether lost between the interior and exterior spaces.

When you boil it down to its core, this concept is almost a monohull with outriggers. Of course, this is a major simplification, however, the concept holds, and allows for a much simpler construction process. But the designers behind the concept are wary of the current trend for large luxury catamarans. In their press release for the concept they write - “...We believe that the current trend to design large superyacht catamarans is fundamentally wrong. We strongly believe if you want the benefits of multihulls at 40m plus size the only practical solution is a trimaran. The extensive design research and analysis we have undertaken for an 80/90m and a 40/50m multihull superyachts clearly shows that a trimaran is the best option.” 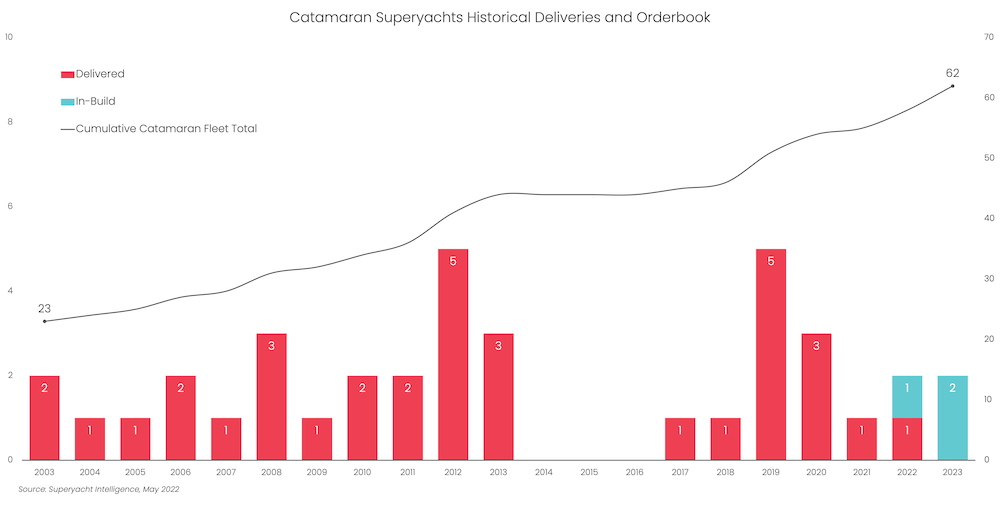 As the beam of the concept is so large, one could question how easy it would be to find space in a marina. ‘Why not? Because there isn’t enough marina infrastructure’ is probably along the lines of many past conversations between brokers, potential clients and designers. But Doyle believes that there is a relatively simple answer for this, “The infrastructure grows with the demand. And a lot of these boats like sitting out on the hook because they are away from prying eyes or away from getting damaged on the dock. So if she is going to go onto the dock, well, marinas are capable of taking boats of this size now. The majority of its time could be offshore with crew alongside just monitoring the boat and doing updates. The owners probably wouldn't want to spend much time at the dock. Especially with the size of the tenders we have onboard, the convenience of staying offshore is far, far greater.”

Domus exists because the designers undertook diligent studies on possibilities of the smallest size vessel that one could design with a 1-floor layout, without making it look too bulky. While Rob Doyle Design has been focussing on naval architecture, performance, and structural feasibilities, Van Geest Design was the brains behind the styling and layouts. The team behind the Domus project have been involved in the design of over 60 superyachts and has extensive detailed design experience, knowledge and data which allows them the confidence to undertake such a project.