Owner lists 140.5m of yacht for sale with Imperial Yachts

The same owner will be exhibiting both his 73.5m superyacht, alongside his 67m support vessel at the forthcoming MYS.…

Imperial Yachts has announced the listing of two large vessels owned by the same client – the 73.5m Nobiskrug build, Project 783, and 67m Fast Support Vessel (6711), a Damen build. Both yachts will be exhibited at this year’s Monaco Yacht Show (MYS), which has generated a fruitful return for Imperial Yachts in the past two years, with all five yachts exhibited sold within three months of the show.

The current owner bought Project 783, previously known as Graffiti, from the original owner at the end of 2011, when the project was two weeks out from delivery. “My client saw the boat and loved it, but wasn’t happy with the interior and wanted about 80 per cent of it changed,” explained Mark Berryman of the eponymous design studio, in an exclusive conversation with SuperyachtNews.

“The boat hadn’t left the yard at this point, but we went straight into a six-month refit, from design through to completion, which was a massive challenge. The flooring was initially very dark and there were areas of bleached sycamore that he didn’t like. So, we explained to him what we could do in that time-frame and he went with it.” She was relaunched in June 2012 as Project 783, with a grey and off-white paint job and a new interior, which Berryman astutely described as having: “A neutral palette, that could easily be enhanced and is a good starting point for anyone.”

One aspect of Project 783 that seems to have left a lasting impression on Berryman is the “unbelievable” ceiling heights for the size of the boat. “We’ve got clients with 100m-plus projects asking us why they don’t have 2.5m-high ceilings like Project 783. It’s when you’re leaving the boat by tender that you realise how high and well-proportioned they are.”

In 2014, the owner purchased 67m Fast Support Vessel from Damen to support Project 783. “The support vessel is, essentially, a toy machine. It’s got a helipad, a submarine, a dive store; it even had a small plane at one point, which looked like it had been built out of papier mâché,” continued Berryman, who, upon being re-called for his finite touch, had input into the design of this boat too, but was limited to minimal luxury fit-out areas: the wheelhouse and parts of the dive store.

With Project 783 having been commissioned before the support vessel, she is very much fully functional as a standalone superyacht – i.e. there are still tenders on board, but the support vessel provided greater capacity for greater ambitions.

Retrospectively, Berryman spoke of one change he would have liked to have incorporated on the Damen build: “I never understood why there was a crew gym on the support vessel. I’d have made it an owner’s suite, perhaps also with accommodation for a few guests, so that you could leave the mothership and find a nice cove to go diving. I think it would have made the boat that bit more versatile, especially if it was supporting a 100-metre-plus boat.”

With undisclosed asking prices for the two vessels, it’s hard to position them in the marketplace. However, these listings clearly have a lot to offer, whether they are considered as a pair, or separate listings.

Is one man’s junk another man’s treasure?

A word from the owner: ‘AE Cap d’Antibes’ reduced by €2.1 million

One to One: Paolo Casani

Paolo Casani, CEO of Camper & Nicholsons, discusses the next generation of brokerage

A new 820-tonne travel lift and 12,000sqm of hardstanding will triple the capacity of the Auckland refit facility 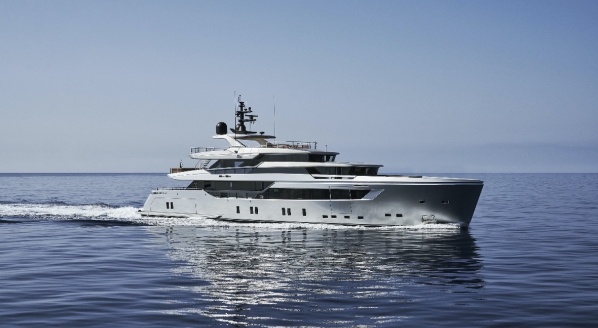