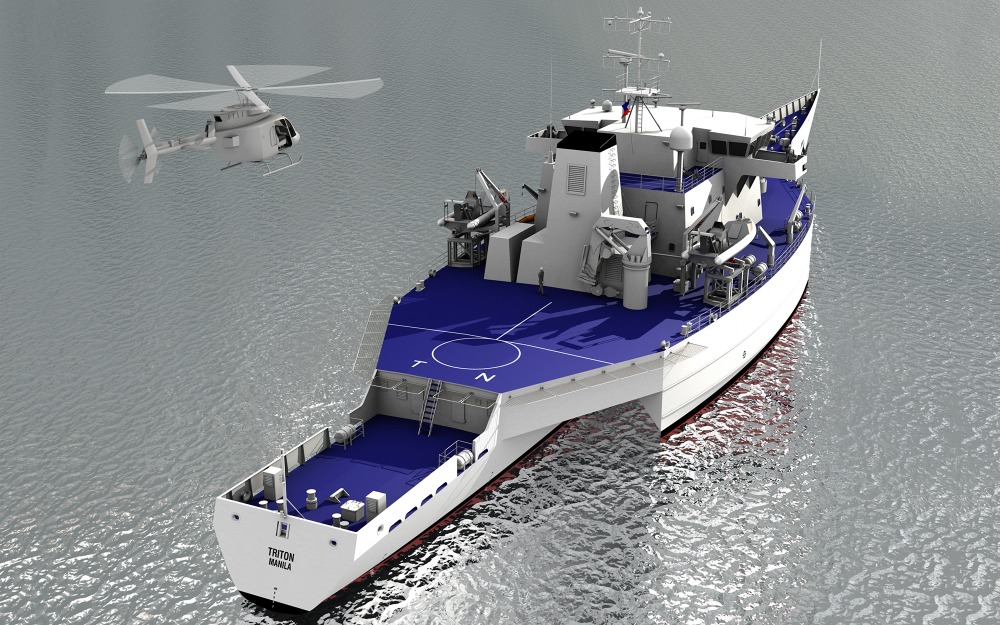 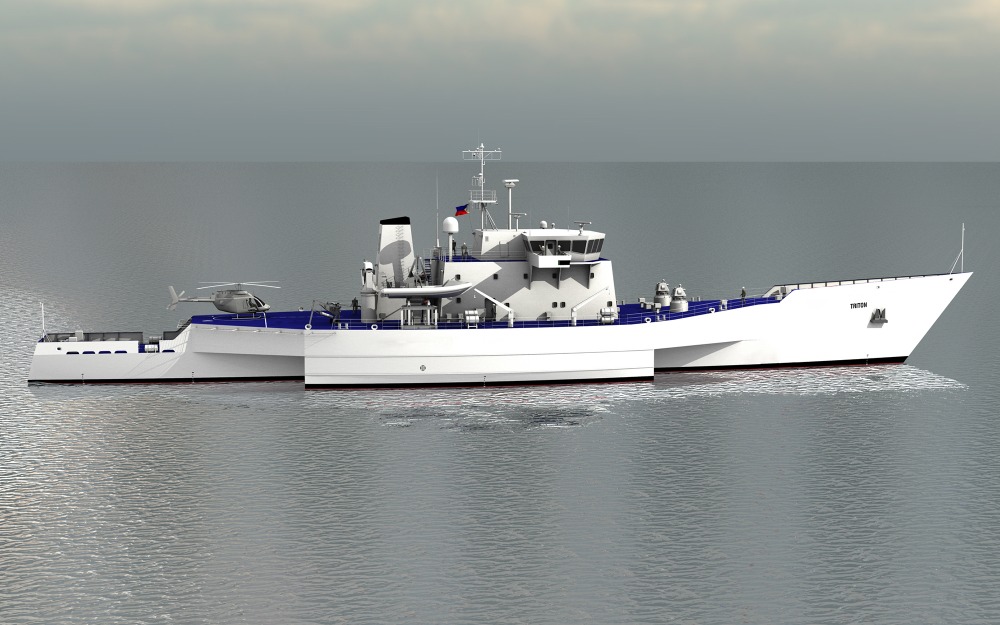 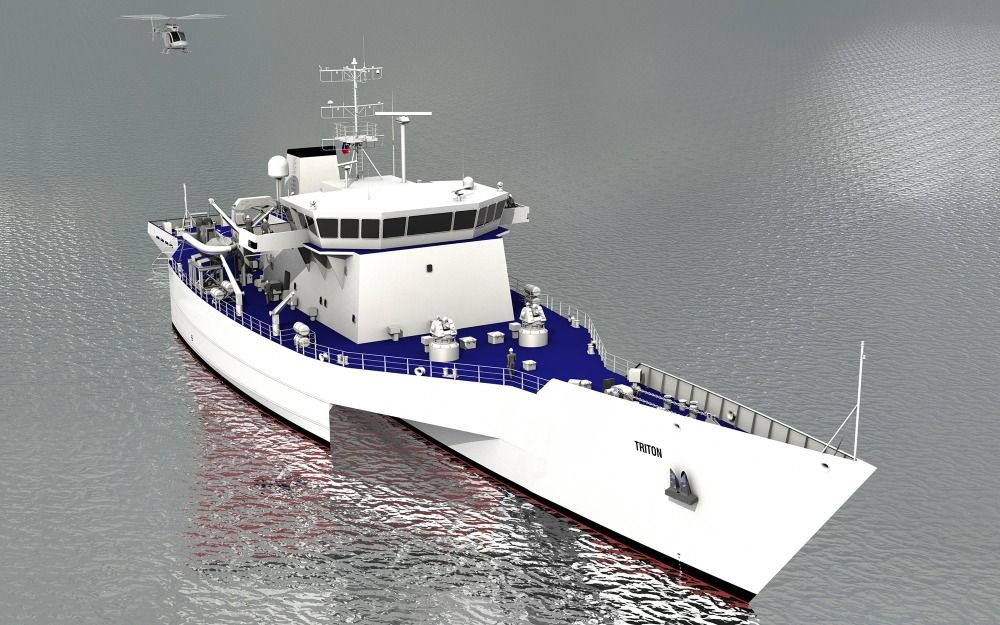 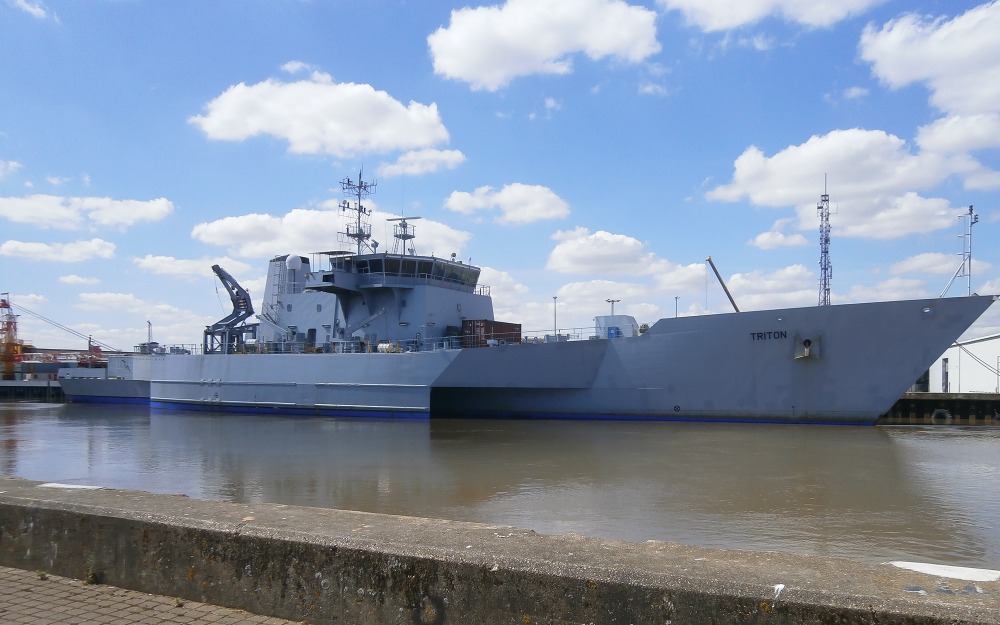 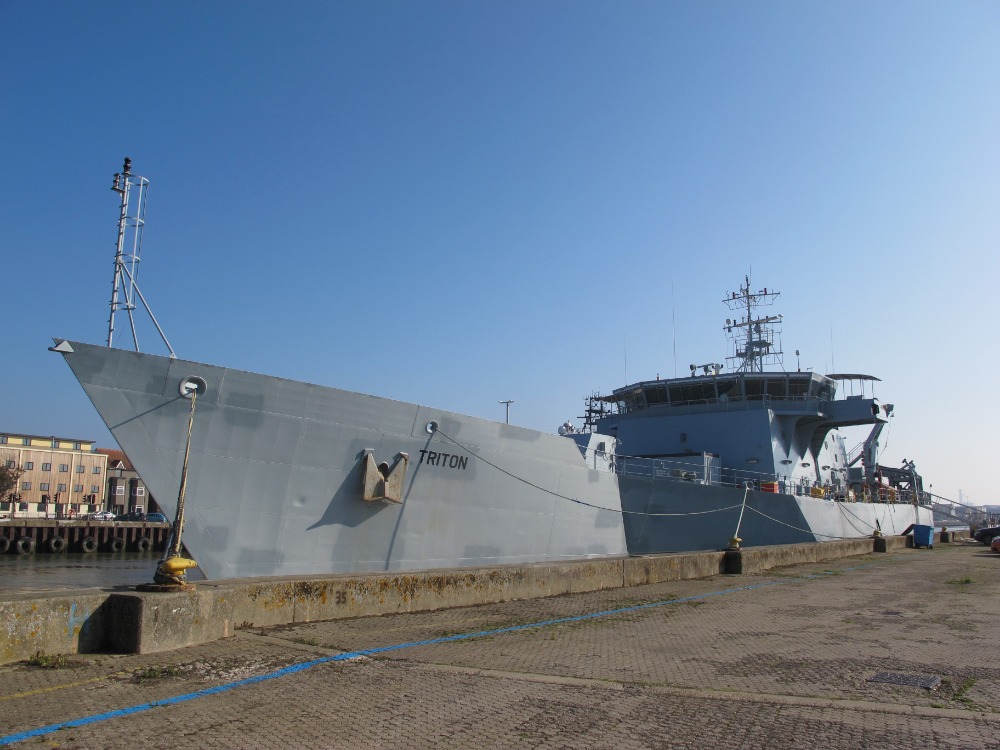 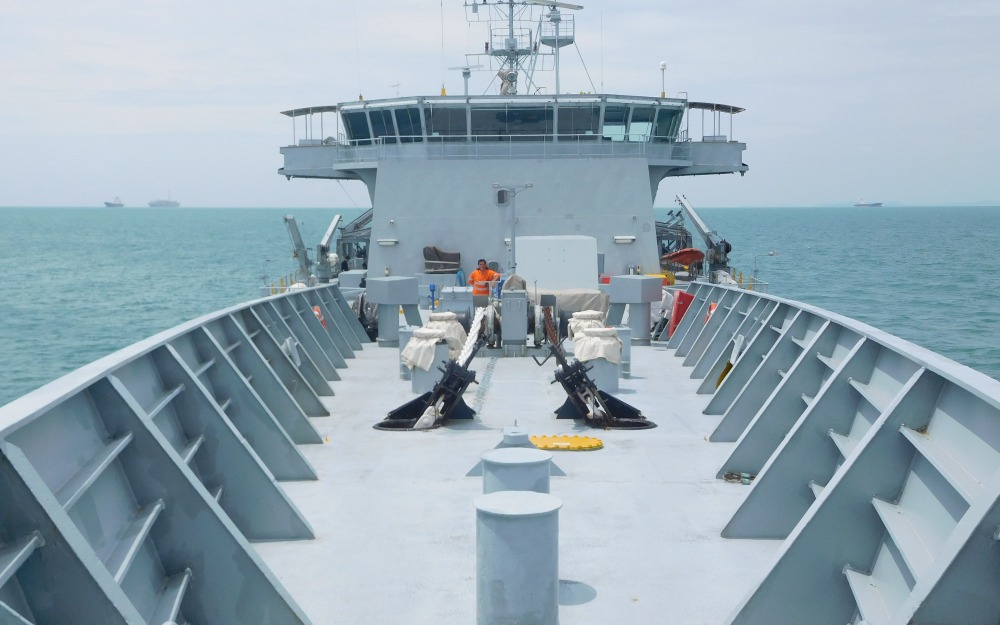 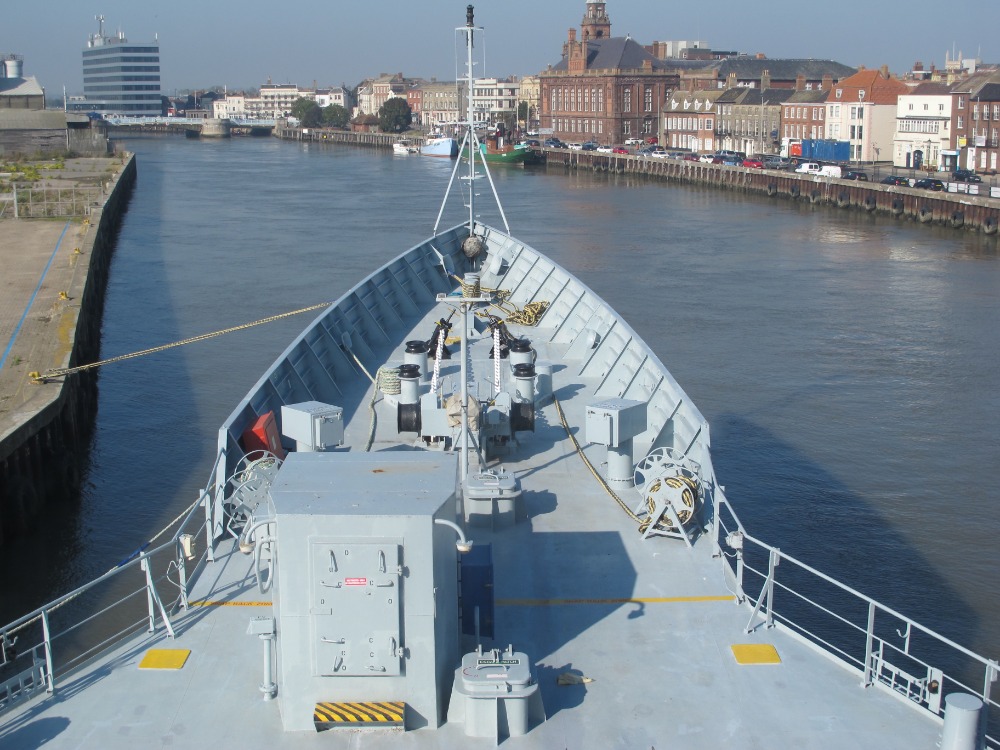 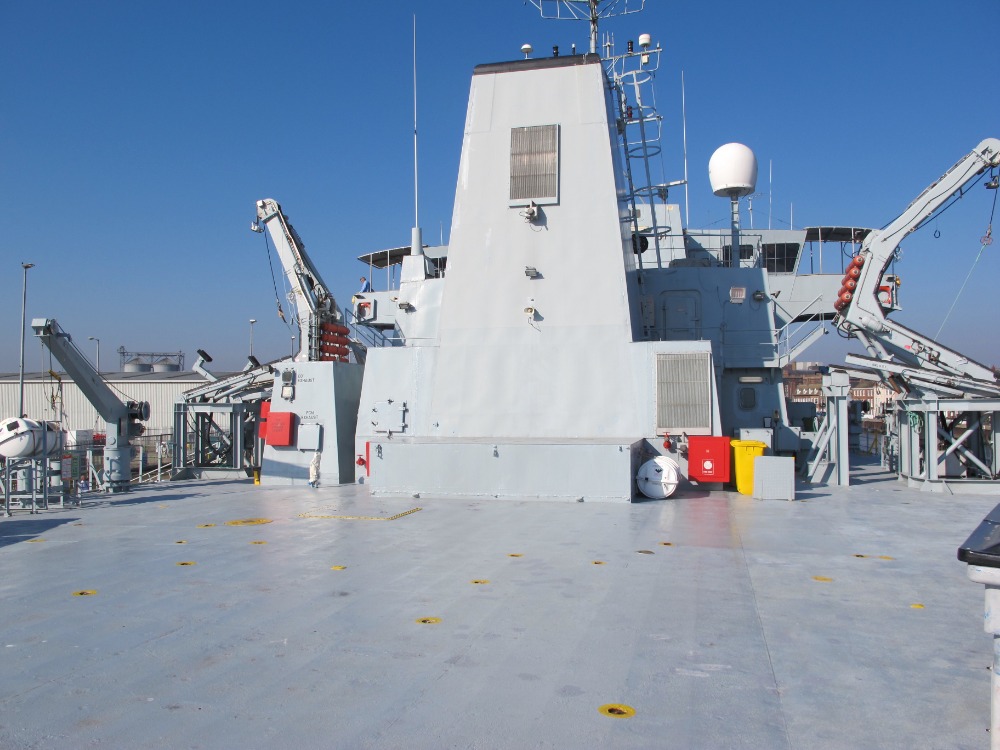 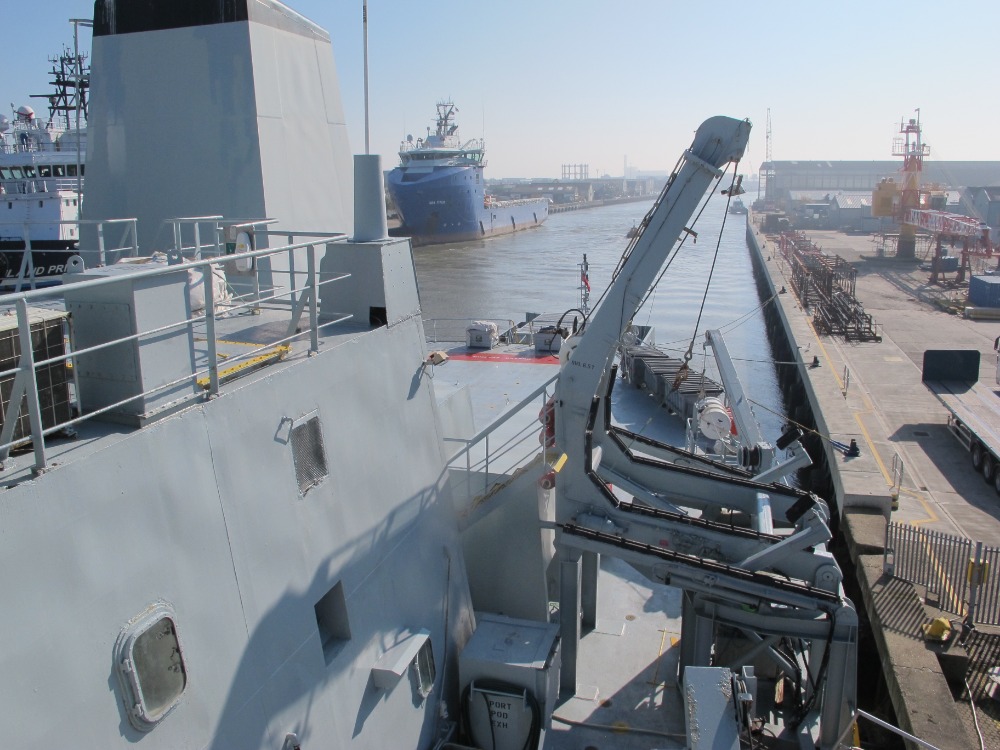 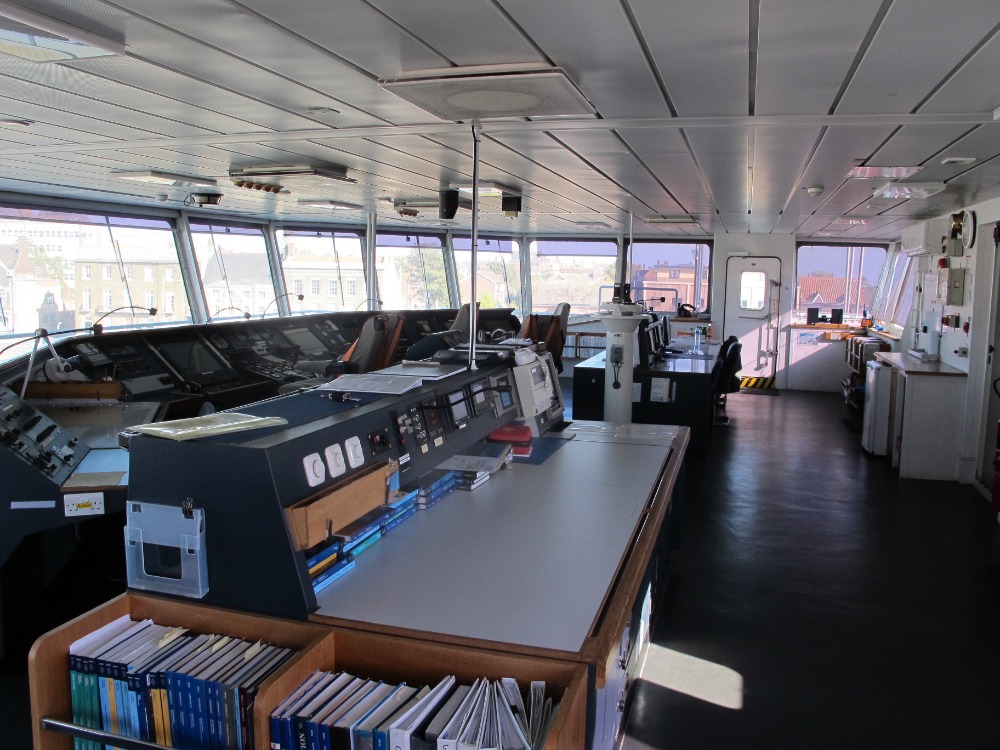 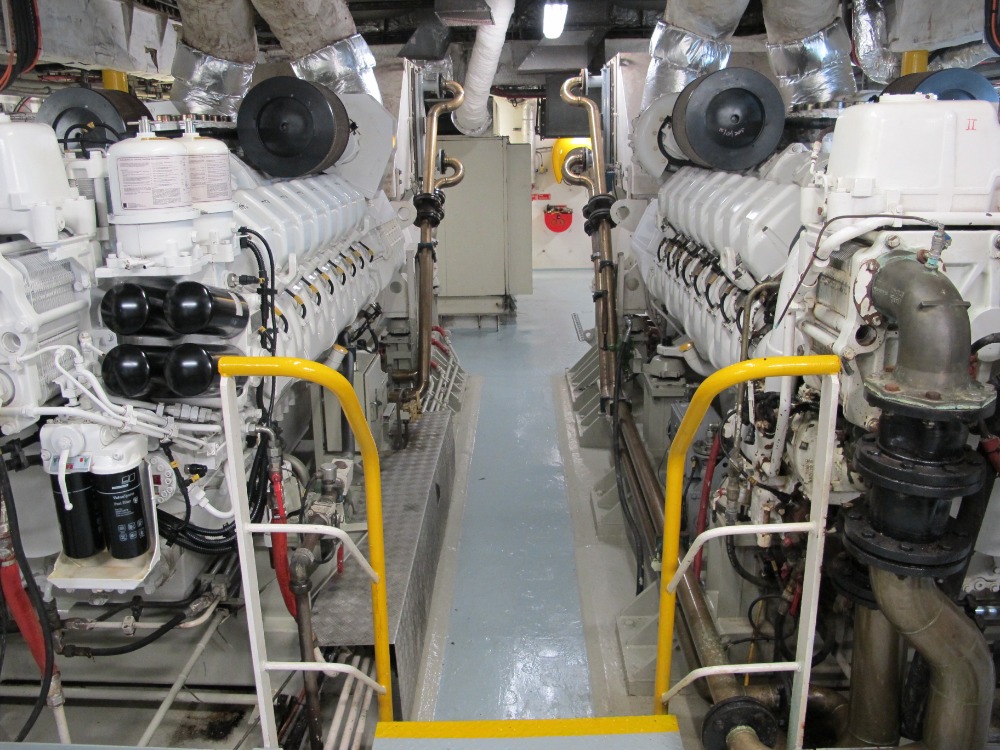 There is certainly an industry-wide admiration for the technical specification to which commercial vessels are built – and some seek to capitalise on these proven engineering platforms for luxury yacht conversion projects or for use as support vessels. Rarely, though, does one get to consider a vessel built to warship standards for conversion…

Last week, I had the pleasure of visiting the 98m Triton, a vessel built by Vosper Thornycroft in 2000. She was designed to be a scaled-down demonstrator ship for the 150m Type 23 Frigate. Jointly funded by the UK and US governments, the premise of her build was to test trimaran technology for future warships.

Currently lying in Great Yarmouth, Ocean Independence is marketing her to the superyacht sector as a (potential) support vessel conversion project, for €10 million. “It’s a ‘pocket Frigate’ – if you ever went on a Type 23 Frigate, you would realise it is built on the exact same engineering platform,” explains Nigel Darling, whose family business, Gardline (no longer owned by the family), bought the vessel in 2004 after the government finished its testing programme.

“We thought she would make an excellent survey boat because she’s relatively fast and very fuel-efficient,” Nigel explains. Originally, the Darling family put her into service as a hydrographic survey ship for the Marina Coastguard Agency, producing charts, however, in 2006, Nigel’s brother Gregory arranged a contract with Australian Customs which had issued a requirement for the provision of a maritime patrol and response vessel.

Arriving in Darwin, Australia, in January 2007, Triton was operated by Australian customs until October 2015. She was originally put into service to be a fisheries protection and general-purpose long-range patrol vessel, however, with an increasing number of Indonesian asylum seekers reaching the Australian borders during her contract period, her primary objective changed.

“It’s a ‘pocket Frigate’ – if you ever went on a Type 23 Frigate, you would realise it is built on the exact same engineering platform.”

The holding company for Triton is Norfolk-based Gardline, which was founded by the Darling family in 1969 and, according to the BBC, was sold in 2017 in a deal worth £40 million. The new owners of the company have deemed the vessel surplus to their requirements, so she is being marketed by the Darling family as a patrol boat to the commercial sector or a support vessel conversion project to the superyacht sector.

“When she was in the hands of Australian customs, she was required to be at sea for 320 days per year,” explains Gregory, former chairman of Gardline, as we begin a tour of the vessel. “She was going to sea for three weeks at a time, so she’s kitted out with spares to maintain her at sea so there are no delays.” Such equipment includes a spare MTU engine in a large container on the foredeck.

She has two relatively new Norsafe Davits – Gregory describes these as the “Rolls-Royces” of davits – with 8.5m RIBs installed for the Australian customs officers, who were being sent to and from the boat. As such, the bridge has excellent visibility, with large sweeping windows and two wing stations to ensure optimum safety when operating the Davits and manoeuvring the three-hulled ship.

The standard of finish in the accommodation block is well short of superyacht standards, but the space could be well utilised for overflow guest accommodation; crew accommodation; communal crew areas; and a laundry area, among others, to ensure the best use of guest leisure space on the mothership.

“When she was in the hands of Australian customs, she was required to be at sea for 320 days per year.”

Forward on the main deck was austere accommodation for up to 100 people during her time in service. “The capacity of the vessel is the reason we got the contract,” Gregory explains. “She was certified for up to 145 people. Sometimes, she would be cruising for 28 days with that many people on board – no less and sometimes more, with everyone fed and watered, and, including fuel.

“We were constantly cruising and picking people up – she would do around 5,000 nautical miles per month and would normally run on one engine, getting through 7,000 litres of fuel per day.” The two water makers on board can produce 20 tons of water per day, Gregory says.

The vessel would go in for maintenance every two-and-a-half years, but only because of operational requirements. “She would go to Singapore and dry dock for a week and they would do everything. We re-engined the ship in Freemantle in May 2009 [with two MTU 16V 4000M40B engines] because her Paxman engines weren’t doing the job. That took around three weeks and is the longest yard period she’s had.”

Today, Triton is fitted with a diesel-electric propulsion system comprising two generators driving a main AC motor and two side-hull thrusters. The generators are installed one deck above the waterline, reducing the acoustic and magnetic signature into the water. Excluding the cost of the 14 crew, the vessel operates on an annual budget of £0.5 million, which pales in comparison to the operational expenditure of any superyacht.

It seems I was not the only person whose interest was piqued by this vessel coming onto the market. During my tour, I find out that Mike Reeves, partner of British design studio, Claydon Reeves, is devising a concept for conversion.

“Project Triton is a conversion project with some genuinely unique features,” he explains in a follow-up conversation with SuperyachtNews. “She has a bold outline and profile with a strong military aesthetic, although some angles are currently not very flattering! The upside of the quirky design and advanced naval architecture gives her impressive economy and range. Stability is exemplary, improved by her low, wide stance.”

“She was certified for up to 145 people. Sometimes, she would be cruising for 28 days with that many people on board – no less and sometimes more.”

Claydon Reeves, in conjunction with Ocean Independence and the current owners, is exploring two future usage scenarios: Triton as a shadow/support vessel, or alternatively, as a dedicated explorer superyacht.

“The shadow vessel design will exploit the generous exterior deck areas and helicopter functionality along with adding some new accommodation layouts and superstructure modifications,” he continues. “The focus will be on delivering a design that can provide a multi-usage scenario, improving upon what is currently in the market place.

“Trimarans are a format not often seen in our industry and they have some significant advantage for this type of vessel. In terms of the contemporary mantra of repurposing an older design, combined with the inherent fuel efficiency of the trimaran design, Triton is hard to beat.”

By contrast, as a potential superyacht, Reeves says they are exploring the options of opening up parts of the GA that are not currently used, to better integrate guest and crew areas. “The GA will feature unique living areas along with volumes and proportion more akin to those found in architecture. Guest cabins will all have external balconies and panoramic use of glass.”

Reeves adds that the exterior style will celebrate her military background, although be reconsidered for life as a truly unique superyacht. Helicopter deployment will also be repositioned along with the need to allow guests greater access to the waterline. Crew cabins will be refined along with a centralised staircase core and elevator.

“As a conversion project she could provide a new owner with a cost-effective path to owning a design that challenges conventional thinking about what a 21st century superyacht could, or should be,” concludes Reeves. I’m inclined to agree…!

Can superyachts act as salvage vessels?

Autonomous yachts: the next step?