M/Y Kahu, a converted ex-navy patrol vessel with a complex history, provides a cautionary tale for the potential misuse of an ageing fleet… 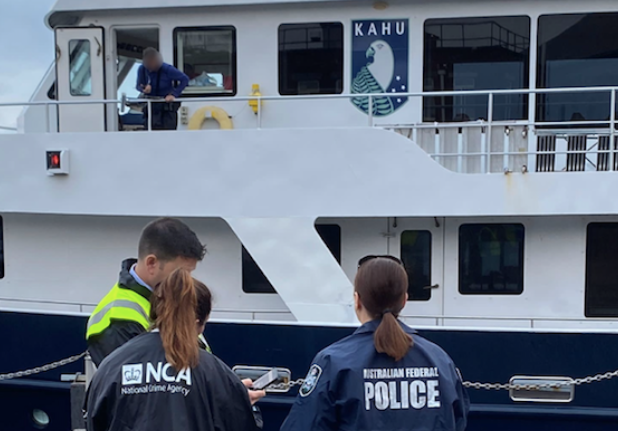 Intercepted in international waters off the south coast of the UK, 6 individuals aboard the 37m New Zealand-built M/Y Kahu have been arrested, and 2000kg of cocaine seized.

Built at Whangarei Engineering & Construction Ltd (WECO) in 1979, it originally served as a small navy patrol vessel before being purchased and undergoing an extensive refit at Fitzroy Yachts in 2011. The then-owner of both Kahu and the Fitzroy Yachts yard, Peter White-Robinson, when interviewed by SuperyachtNews in 2012, outlined his family’s plan for Kahu to undertake a full round-the-world itinerary, finishing in 2015.

Kahu set sail in August 2012; however, after reaching Canada in May 2013, Fitzroy Yachts fell into financial difficulties, and White-Robinson stepped down. The voyage was cancelled, and Kahu was sold. The exploration focussed refit of Kahu was extensive, as White-Robinson said at the time: “We added a lot of equipment like a sewage treatment plant, watermakers, a third generator, stabilisers, bow and stern thrusters and an extra anchoring system. We’ve upgraded all the electronics and GPS, radar, and we have a whole different suite of instruments up there in the bridge." Most importantly, considering the travel itinerary planned, its fuel capacity was upped from 13,000l to 32,000l, giving an 8000-mile range at 8 knots, as White-Robinson continued, “The navy listed their range as being 1300 miles, so we have a much better range now.”

Kahu’s last known asking price was around €1.5 million and it was seized with what has been estimated as €200 million worth of cocaine on board. Considering the potential range and capabilities of the vessel, its repurposing is easier to understand. At a superficial level, the regularity of crossings from the Caribbean and Latin America to the UK and Europe may have implied that this voyage was not out of the ordinary. However, initial reports suggest that a coordinated investigation between The Australian Federal Police and the UK's National Crime Agency (NCA) was tracking the vessel and aware of its cargo. It also serves as a warning to the industry; there are many smaller, ageing and private vessels that can be misused.

With the migration of increasing numbers of vessels into geopolitically unstable regions and narco-trafficking hotspots, there is also the potential exposure of more yachts and crew to compromising situations. If the forces behind the global drugs trade are willing to build entire submarines - a recent electric version that was seized costing an estimated 1.5 million USD  according to the Colombian Navy - We may see more interest from the illicit drugs trade into the vessels operating in regions affected by drug production and export, and those capable of transporting large quantities of drugs across long ranges.

The seizure of Kahu is an inauspicious juncture for an explorer that represented an impressive yacht conversion example. There are many other yachts of its type and cost with a trans-Atlantic range, with data from The Superyacht Agency calculating that there are nearly 400 motoryachts with a last known asking price of €1.5 million or under that could make the crossing. Increased awareness of the full lifestyle of the fleet and the potential exposure of crew to compromising situations is needed. This is certainly not the first such case and will not be the last.